A letter to Southeast Asian (expats from India, Pakistan and Bangladesh) parents with toddler-aged kids on track to be raised in Canada or the United States.

Congratulations to your kids on entering toddler-hood! While you may have spent the past 10 years of your life in Canada or the U.S., you've spent the majority of your time "back home" -- somewhere in Southeast Asia. You aren't sure what your kid's childhood is going to be like, but you are certain, since they live in Kingston and not Karachi, that it will be quite different than yours. That excites and scares you. 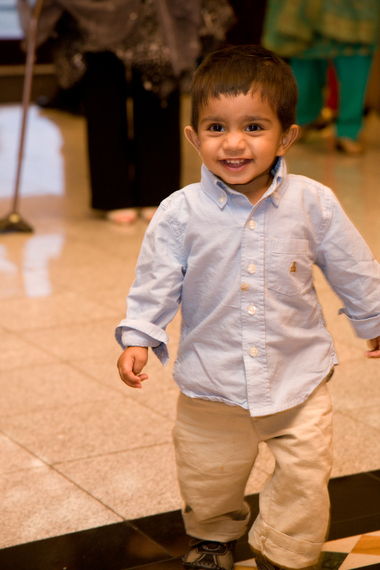 As a born and raised Canadian of Southeast Asian origin that has spent 20 years in Canada and 11 in the U.S., I'm here to quell your fears and give you a snapshot into what to expect. Having rode this highway already I'm happy to be your tour guide on its trials and tribulations.

Language Limitations -- Your first language is not English, but it is for your child if they are living in North America and go to a school with more Rebeccas than Rishis. You will try hard to pass your language on to them, but in most cases you'll fail. Then, you'll complain to other parents that your child doesn't speak your language. Trust me. You'll start noticing this when they start pre-school. Your language is important -- it is a gateway to your culture and ancestry, but the only way your kid masters the language is if they need to communicate with someone at home that speaks your language only. If you want your kid to know Hindi then they better not catch you speaking English to anyone. Or,you may want to have Hindi-speaking family stay with you for two to four years. Remember, most communication is non-verbal; just because your child and grandma don't speak the same language doesn't mean they can't communicate. A Skype call every day, well-wishes, smiles and other acts of kindness don't need translation.

Call in Sick for the Academic Decathlon -- Southeast Asian parents are notorious for insisting their kids do well in school. However, at early ages, this is borderline fanatical. While most parents put their kids in sports or music we put ours in the spelling bee circuit. What's crazier? The "My child is an honor-roll student at ABC pre-school" bumper sticker or the parent that bought it and put it on their foreign minivan? Don't be that parent, and don't worry if your kid hasn't memorized the Yellow Pages by the time they're potty-trained. I realize that your sister's old college roommate has a toddler that reads chapter books, but resist the urge to participate in this academic decathlon. Congratulate your friend's daughter on her monumental feat and move on. As time goes on, most of us learn how to read chapter books and successfully navigate the turbulent waters of double-digit addition. Honestly, most Southeast Asian kids peak academically at 9 and then fall in line with other kids putting in similar effort. Education is a long and winding road... not a 100-meter sprint.

Keep Family Close -- Most Southeast Asian families have different social norms than our fellow westerners. Some of us don't eat beef/pork, others abstain from alcohol and some of us consider Christmas boring since the stores are closed. Having a child adhere to these norms is possible, but you better have some family and friends with similar beliefs close by to reinforce your stance. Peer pressure works extremely well. If you don't want your kid to eat cheeseburger Happy Meals then you'd better explain to them why not and reference another child or 10 in the same boat. Otherwise, poor little Purush is going to resent his friends that swim in cheeseburger nirvana while he gets spinach curry. Having family and friends with a similar value system to yours is important for your kid. It helps them relate to things they are going through with kids their age they trust and see often. This makes the odd time your child feels left out at a birthday party only serving pepperoni pizza somewhat bearable.

Taking the best of your culture and passing it onto your kids is a constant work in progress. You have to be prepared for battle from a myriad of external forces, but right now when they are learning right from wrong, is as good a time as ever to start. Enjoy the ride and hands inside the cart at all times.