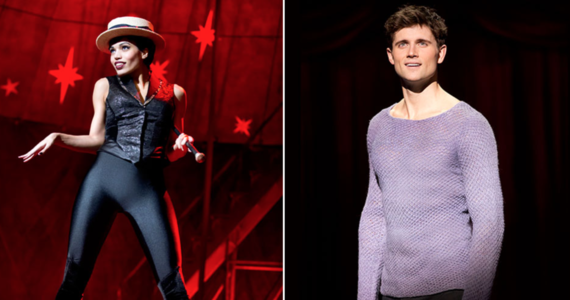 Right now people in the Los Angeles/Orange County area are lucky because they can have two great nights of theater, at two very different plays that share one universal theme: that each of us has to, one day, come to grips with who and what we really, truly are and what happiness looks like.

That common theme couldn't exist in two more different plays. First, there's Pippin at the Segerstrom Center for the Arts in Costa Mesa, CA. Having never seen it, this new incarnation was a delightful and highly entertaining surprise. It's a story-within-a-story, a play-within-a-play and less than 10 minutes in I turned to friend Daniel Charleston and exclaimed, "Bob Fosse HAD to do this play, if not, this is the biggest bit of plagiarism I've seen!" Thirty minutes in I turned (I know, I talk but just a little and in low voices) and said, "OK, I wonder who the Nixon character will be since this was obviously written during or around Vietnam." 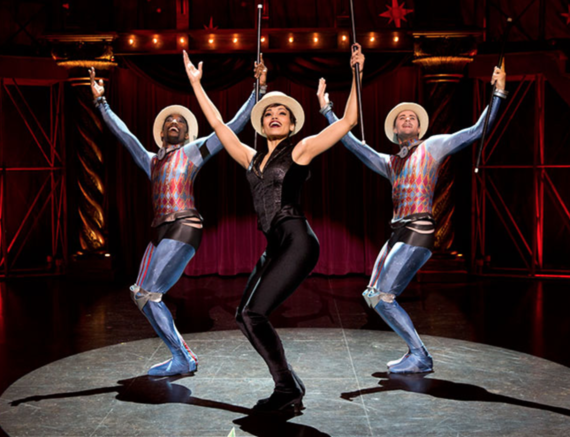 By intermission I was sure that I was watching something vintage yet new. It felt like Cabaret meets A Chorus Line, dark, brooding, the irony of times of war, power greed, lust, corruption, the notion that heavy is the head that wears the crown and that we all search often in many places for fulfillment all flooded from the stage.

It was during intermission that I found a display at the Center with the history of the play, and sure enough, I was right about it all. Yes, of course Fosse directed the original production and contributed to the libretto. In 1973 Ben Vereen won the Tony for playing the Lead Player, and then in 2013 Patina Miller would win for the same role in the revival, making history as one role played by two different genders having each gender win for their role.

Pippin is the restless prince searching for a his place in the world. He is a player within a larger play and succumbs to many pitfalls and pleasures, including the pleasures of war, along the way. He goes from Prince to King and back again and then has a grand realization that gets set to music as oft happens in these things. He learns, he lives, he grows, he accepts and while he finds his "corner of the sky" there's always someone new looking, waiting to go out and try to find their piece of it to; the circus never sleeps, the show always goes on.

This reinvention is inspired and goes back, I'm told by those that know, to the darker themes of the original. After the original broadway debut the play ended up in college and high school productions a sanitized safe version of a once-edgy production. This new creation by The American Repertory Theatre with Diane Paulus director and a new Cirque feel with Chet Walker and Gypsy Snider handling circus choreography makes everything old new again. The revival is a huge success winning four Tony Awards (nominated for 10) and now the national tour is bringing this sometimes unsettling, always entertaining musical back to American audiences. It plays until November 23rd at the Segerstrom Center for the Arts.

Reinvention is what another play about finally finding one's place takes to the Nth degree as the Pantages Theatre in Hollywood hosts Kinky Boots until November 30th. This modern-day musical is the La Cage of its time and will go on to be a musical performed for decades to come. It's odd I saw them back-to-back as they battled it out at the 2013 Tony Awards. Kinky Boots was nominated 13 times with Pippin in many of the same categories. When Kinky Boots won for Best Musical countless outlets called it an upset. And when Cyndi Lauper won the Tony for the score she became the first woman in Tony history to do so alone in the category.

To say it's a joy is an understatement: but in fairness I adored the movie. The fabulously touching, quiet story of Charley from North Hampton and Lola, a larger than life man with too much fashion sense so he obviously does incredible drag moved me the moment I saw it. I'm gay, I've done drag, some of my best friends are or were marvelous drag queens and I've seen homophobia first hand for too many decades. The sweet story of two people discovering so much about themselves under dire circumstances, and the fact that it's all true, well, you had me at the boots.

Now, with Lauper and Harvey Fierstein, who did the book, that movie is a play that entertains from the opening until well after you leave the theatre. I am still singing "the sex is in the heel..." The sweetness, the kindness, the gentleness of the movie isn't lost but the incredible potential of a play about making kinky boots for drag queens is utilized expertly and to its fullest potential. It's been a long time since a new play has arrived, a new musical; not a revival, a brand-spanking-new one. Book of Mormon took Broadway and the nation by storm, and now, Kinky Boots. Live theatre is far from dead and while these plays are the equivalent to the blockbuster superhero movie for Broadway, the product is far better and satisfies much longer than most of film's mass market or pop products.

The touring cast is superb. Be aware it may change city to city and always check the website if there's someone in particular you want to see in this or any role. But not to worry, these roles lend themselves to great performances, each one, and every member of the touring cast met the challenged and soared. Steven Booth's Charley is the perfect everyman, in a relationship he thinks he wants rebelling against a father he thinks he hates and life he thinks he needs to escape only to find later, say it with me Dorothy, that there's no place like home. Kyle Taylor Parker IS everything Lola needs to be; sassy, vulnerable, tough and raw all at once. As a boy or a girl he gives the performance all the fabulousness it needs and isn't a stereotype, trust me. I KNOW Lola. My friend Dennis Cope and I laughed after opening night at the Pantages that Empress Michelle from Long Beach, Calif., WAS Lola, we both knew her! Divas one and all.

Different plays, different moods, different methods but common themes that make for extraordinary nights of live theatre. It seems for most of November from Orange County to Hollywood Southern California has the absolute best of 2013 Broadway in it simultaneously for two great 2014 seasons at Segerstrom and Pantages. Check their websites for ticket prices and availability.

To hear the Karel Cast get the Karel Cast App, subscribe in iTunes to the Podcast or simply go to the most incredible website on all the planet, save this one, karel.media