For the first time, more than half of U.S. public school students live in low-income households, according to a new analysis from the Southern Education Foundation.

Overall, 51 percent of U.S. schoolchildren came from low-income households in 2013, according to the foundation, which analyzed data from National Center for Education Statistics on students eligible for free or reduced-price lunches. Eligibility for free or subsidized lunch for students from low-income households serves as a proxy for gauging poverty, says the foundation, which advocates education equity for students in the South.

The report shows the percentage of schoolchildren from poor households has grown steadily for nearly a quarter-century, from 32 percent in 1989. "By 2006, the national rate was 42 percent and, after the Great Recession, the rate climbed in 2011 to 48 percent," says the report.

Kent McGuire, president of the Southern Education Foundation, told The Washington Post that the analysis shows poverty has reached a "watershed moment."

“The fact is, we’ve had growing inequality in the country for many years,” McGuire said. “It didn’t happen overnight, but it’s steadily been happening. Government used to be a source of leadership and innovation around issues of economic prosperity and upward mobility. Now we’re a country disinclined to invest in our young people.”

The analysis shows the highest percentages of poor students in Southern and Western states. Mississippi had the highest rate of low-income students -- 71 percent. New Hampshire had the lowest, at 27 percent. 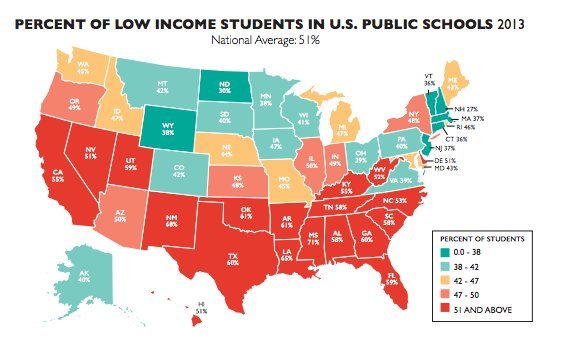 “No longer can we consider the problems and needs of low income students simply a matter of fairness," the report says. "... Their success or failure in the public schools will determine the entire body of human capital and educational potential that the nation will possess in the future."