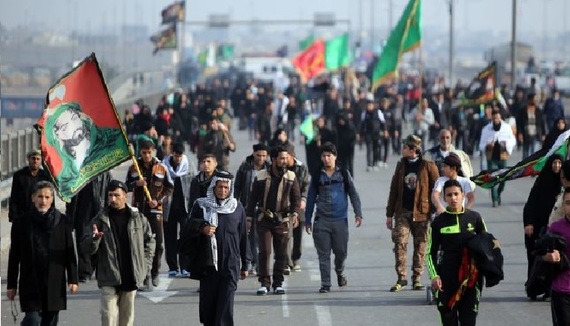 Iraqi pilgrims march through southern Iraq on their way to Karbala for Arbaeen, a major religious gathering. November 2014

Quite often when the mainstream media reports on Iraq's security, they drastically fail to differentiate between the geography impacted by the so-called Islamic State (also known as ISIS, or Daesh) and the other safe regions of the country. False media alarms extend to further exaggeration in describing the various armed groups operating in southern Iraq, making it often impossible for business to be conducted whilst misleading public opinion, thereby deterring investors not to engage in business, and sometimes even pushing foreign governments to wrongly advise their citizens not to visit Iraq.

Painting all of Iraq as a "red-zone" is completely misguided and wrong. Two-thirds of the country enjoys a significant level of security equal to countries such as Egypt or Morocco while suicide incidents in Kurdistan of Iraq or south of the country are no more than those occurring in Saudi Arabia. Foreign companies are still operating normally in the south with tens of thousands of employees, and scores of international flights cruising in and out of Iraq everyday filled with businessmen. On the security front, oil-rich provinces such as Basra, Maysan and Dhi Qar are some 300 miles from the frontlines with Daesh, meanwhile all the pro-state Shia and Sunni militias have been regulated under the Popular Mobilization Forces (PMF), reporting to the Commander-in-Chief, Prime Minister Haider Al Abadi to ensure security across the majority of Iraq.

During my recent visits to the northern region of Iraq (Kurdistan) and the southern provinces of Najaf, Karbala, Babil, Dhi Qar, Maysan and Basra, I witnessed zero incidents, while many foreign journalists and many businessmen went about their business without personal security details, with the exception of a small number of executives.

Life goes on as normal, Shia pilgrims travel on foot to holy cities in their tens of thousands. Key religious commemorations receive millions of pilgrims including thousands of foreigners from around the world, while people stand on the sidewalks of main roads (inside and outside cities) offering free food, drink and overnight shelter, demonstrating maximum hospitality. Indeed some incidents do happen as terrorist groups try relentlessly to send suicide bombers with one-way tickets to create havoc in safe-zones. However, the Iraqi Security Forces (ISF) and PMF have adopted strict security policies and plans that have contributed to regional stability by significantly reducing such isolated incidents.

It is worth noting that 85 percent of Iraq's oil production and export facilities are in the south while 15 percent of the operations are handled by the Kurdistan Regional Government. Both, southern and northern facilities are away from any danger due to the security measures adopted by all Iraqi security forces including the Army, Peshmerga, PMF, and local police. The situation in the midland is different, while the west and northwest of Iraq is more of a warzone, but it is misleading by some media to categorize or imply that all of Iraq is dangerous territory that could fall into terrorists' hands like Ramadi, Mosul or the other Daesh-controlled districts. There are historical reasons why Daesh is on the march in Sunni-dominated Iraq, and for such a transnational terrorist group to replicate their victories in the Shia south or Kurdistan, they would need a welcoming host, or to mobilize over 25 million trained fighters to seize control over the safe parts of Iraq.

Even Baghdad, a city populated with over seven million Iraqis including a Shia majority, would be impossible for Daesh to do more than create security breaches through isolated suicide bombing -- even though such incidents have recently increased in the capital because the federal government allowed internally displaced people (IDP) to enter Baghdad, creating an opportunity for Daesh to infiltrate the city as IDPs. This is something that southern cities would not tolerate as they have adopted similar measures to those of Kurdistan by not allowing any non-residents to enter their provinces unless checked and cleared by intelligence services at city gates prior to entry.

In a nutshell, foreign governments who alert their citizens not to travel to Iraq while not differentiating between red, amber and green zones, are very misleading to investors and foreign travelers. Most of these alerts are based on intelligence reports that take irresponsible mainstream media headlines and false alarms as fact, or as is often the case, to play it safe. However, the country's main oil resource provinces, export corridors and trade routes and infrastructure are all safe and safely guarded, for obvious reasons. Southern provinces and the Kurdistan Region are certainly not in the danger zone and continuing doing business as usual, whilst the inflow of religious tourists into the country's south is increasing by the day.