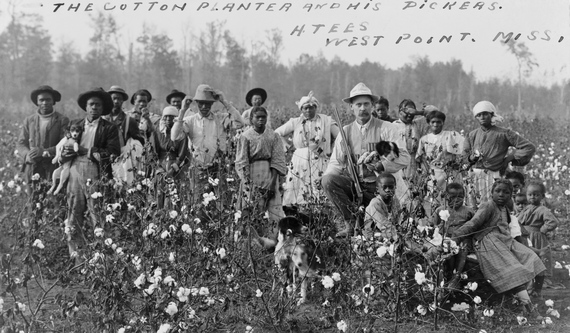 Defenders of the Confederate flag are hoisting themselves by their own petard. Deluded Southerners are showing their true colors in objecting to nation-wide demands to put this symbol of evil out of sight. Objections that are being rebutted right and left, as evidenced by cross-party movements to take the flag out of sight, if not out of mind, in response to the horrific mass murders at the Emmanuel A.M.E. Episcopalian Church in Charleston.

The Confederate flag. A Civil War icon, emblematic of eleven states' secession from our nation, and what we stood for, which was not what they stood for.

Claiming that the south seceded over "states' rights," launching a Civil War that ultimately cost some 640,000 Americans their lives - if you include Confederates as Americans - is a defense shot through with, well, bullet holes. And touting "Southern pride" in defense of this repugnant icon raises an obvious question: pride over what?

Dylann Roof, whose website honored the Confederate flag, and who's reported mission was to "start a race war," has created quite the opposite effect -- bringing our country together in unified commitments to finally, once and for all, do something about the insidious, and at times wickedly subtle, racism that rots our country at its core (along with our cowardly refusal to do anything about the ridiculously easy access to firearms in the U.S., a reputed democracy, and the most murderous country in the world).

And yet, Southern folk are defending what they call Southern pride, and their unique history and heritage, insisting that the Confederate flag has nothing to do with racism, that the Civil War was not about slavery. It was over states' rights.

They're right about States' rights - the right to own slaves. It was all about slavery.

The South's history is indeed unique. Poisoned by slavery, and the culture that nurtured it, it is a shameful blot on our country's legacy no less abhorrent than what Hitler and Germany did to the Jews. It is noteworthy that it took nearly a century after the South lost the Civil War for most of those states to grant African-Americans equal rights. Fifty years ago we still had segregation, bans on interracial marriage and separate water fountains for whites and Blacks.

In 1861 eleven Southern states seceded from the Union, demanding states' rights ... to own slaves. On the eve of the Civil War, Confederate Vice President Alexander Stephens gave a speech, surrounded by Confederate flags. He said: "Our new government is founded... upon the great truth that the negro is not equal to the white man; that slavery subordination to the superior race is his natural and normal condition. This, our new government, is the first, in the history of the world, based upon this great physical, philosophical, and moral truth..."

"That in this free government all white men are and of right ought to be entitled to equal civil and political rights; that the servitude of the African race, as existing in these States, is mutually beneficial to both bond and free, and is abundantly authorized and justified by the experience of mankind, and the revealed will of the Almighty Creator, as recognized by all Christian nations; while the destruction of the existing relations between the two races, as advocated by our sectional enemies, would bring inevitable calamities upon both and desolation upon the fifteen slave-holding States."

In 1860, more than 57% of South Carolina's population were slaves - which suggests a US version of apartheid: 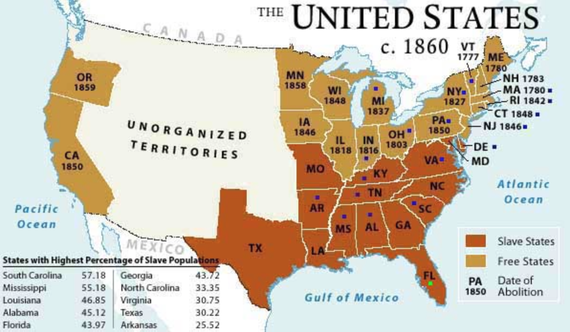 And yet, mis-guided believers in Southern pride, and the Confederate flag, continue to oppose demands to remove the flag from public sight.

They're on the side of a debate Ann Coulter calls "completely moronic ... a litany of liberal talking points that make Republicans look bad (The Washington Times, June 23)." Apparently not. Republicans, along with Democratic colleagues, gathered around South Carolina's Governor Nikki Haley in calling for the removal of the Confederate flag from its capital's grounds.

Many other Republicans, and Democrats - including Senate majority leader Mitch McConnell, a Republican from Kentucky, and Democratic Senator Harry Reid, the minority leader - and others, have followed suit, making similar demands ... the flag be removed from license plates and state flag staffs; streets named after Confederate soldiers be renamed and statues of Confederates be removed from government buildings. Mississippi leaders are calling for a new design of their state flag, to remove the Confederate icon from it. Amazon and eBay have banned the sale of Confederate flags and related merchandise on their sites. Sears and Wal-Mart will no longer sell any of it. Several manufacturers of Confederate flags have announced they will cease making them - including Annin Flagmakers, whose company supplied flags to the Confederates during the Civil War (NY Times, June 24, 2015), while they were based on Fulton Street in lower Manhattan.

The bi-partisan demand to remove Confederate-inspired statues has moved to the White House, where a statue of John C. Calhoun, a former Congressman and US Vice President (1825-1832) from South Carolina, stands along with Davis and Wade Hampton III, one of the South's largest slave owners, who collaborated with violent white supremacists. It was Calhoun who said that slavery "was indispensible to the peace and happiness of Americans (NY Times, June 26, 2015)."

Each state is allowed two statues in the nation's capital, a practice in place since the Civil War era, and there are several Civil War figures in place - from both the Union and Confederate sides. One of North Carolina's is Charles Brantley Aycock, North Carolina's 50th Governor (1901-1905), who ran on a platform that included keeping schools segregated and a vow to disenfranchise Black voters (NY Times, June 26, 2015).

It is noteworthy that to this day a full 26% of Southerners, still favor secession (Zogby poll, 2009).

The League of the South - an organization the Southern Poverty Law Center calls a "hate group," cites their number one reason for secession now, today: "The South's unique history and culture is worth protecting (ibid)." They insist the Confederate battle flag "stands for the heroic effort our people made 150 years ago.... (NY Times, June 19, 2015)."

OK, heroic. But for all the wrong reasons.

The Confederate flag, and why it was created, is at the very heart of the Southern history and heritage these folks are defending. Its creator called it the "White Man's Flag" and when he created it he was quoted as saying: "As a people we are fighting to maintain the Heaven-ordained supremacy of the white man over the inferior or colored race ...a white flag would thus be emblematical of our cause." William T. Thompson (April 23, 1863), Daily Morning News.

It is beyond past time for dramatic, meaningful change.

Kathleen Smith, a top commentator on Facebook, posted this on June 19:

I'm a descendant of General Robert E Lee, via my maternal grandfather. If anyone has a right to claim this flag as part of their heritage, it is me, my sister, my cousins, and our children.

The Confederate flag is no more a symbol of heritage than a white hood is. This flag represents the false belief that some are created less by God. It has no place in a democratic nation which purports to respect the full equality of every citizen.

This flag represents where my family was, but not who we are now nor what we stand for today; equality, respect for humanity, united.

And State Senator Paul Thurmond, Republican son of Strom Thurmond, former South Carolina Governor and Senator, and a segregationist candidate for president in 1948, had this to say, "Our ancestors were literally fighting to keep human beings as slaves, and to continue the unimaginable acts that occur when someone is held against their will. I am not proud of this heritage" (NY Times, June 24, 2015).

My own great grandfather, from Kentucky, a slave state, where I was born, fought for the Confederates in the Civil War. My grandmother, his daughter, carried on the family tradition as a longtime member of the Daughters of the American Revolution - which has a history of racism; up until the 1980's they rejected applicants based on race. And yet here I sit, a Kentucky Colonel no less, flat out rejecting this side of my family's history and heritage, just like Lee and Thurmond decedents are.

James De La Vega, an accomplished street artist and recipient of a Joan Mitchell Foundation Painters & Sculptors Grant in 1999, challenges us all in his provocative graffiti art on 124th Street up in Harlem ... 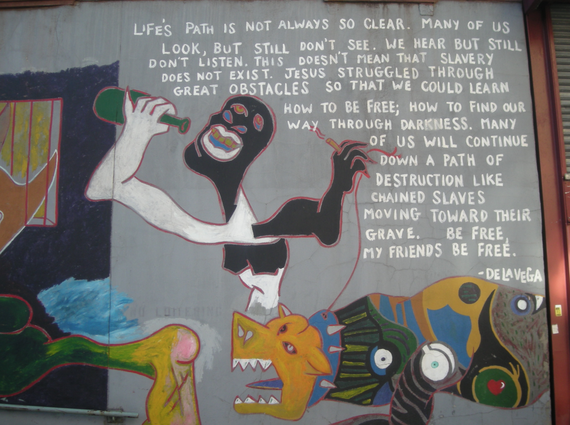 The scab has been ripped from this terrible wound. The horse is out of the barn, as some would put it. Confederate sympathizers are being taken to task. Fair-minded people are rejecting their ancestors' soiled heritage, and their claims to Southern pride, and what it really means. At long last -- this country is coming together.