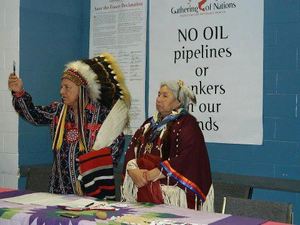 The State Department, still with "egg on its face" from its statement that Keystone XL would have little impact on climate change, sunk a little lower today as the most respected elders, and chiefs of 10 sovereign nations turned their backs on State Department representatives and walked out during a meeting. The meeting, which was a failed attempt at a "nation to nation" tribal consultation concerning the Keystone XL Pipeline neglected to address any legitimate concerns being raised by First Nations Leaders (or leading scientific experts for that matter).

Climate Science Watch, The EPA and most people with common sense rebuked the State Department's initial report and today First Nations sent a very clear message to President Obama and the world concerning the future fate of their land regarding Keystone XL.

Vice president for conservation policy at the National Wildlife Federation Jim Lyon said of the department's original analysis that it "fails in its review of climate impacts, threats to endangered wildlife like whooping cranes and woodland caribou, and the concerns of tribal communities." Today tribal nations added probably the most critical danger of the pipeline which is to the water. Their statement is below:

On this historic day of May 16, 2013, ten sovereign Indigenous nations maintain that the proposed TransCanada/Keystone XL pipeline does not serve the national interest and in fact would be detrimental not only to the collected sovereigns but all future generations on planet earth. This morning the following sovereigns informed the Department of State Tribal Consultation effort at the Hilton Garden Inn in Rapid City, SD, that the gathering was not recognized as a valid consultation on a "nation to nation" level:

The Great Plains Tribal Chairmans Association supports this position, which is in solidarity with elected leaders, Treaty Councils and the grassroots community, and is guided by spiritual leaders. On Saturday, May 18, the Sacred Pipe Bundle of the Oceti Sakowin will be brought out to pray with the people to stop the KXL pipeline, and other tribal nation prayer circles will gather to do the same.

Pursuant to Executive Order 13175, the above sovereigns directed the DOS to invite President Obama to engage in "true Nation to Nation" consultation with them at the nearest date, at a designated location to be communicated by each of the above sovereigns. After delivering that message, the large contingent of tribal people walked out of the DOS meeting and asked the other tribal people present to support this effort and to leave the meeting. Eventually all remaining tribal representatives and Tribal Historic Preservation Officers left the meeting at the direct urging of the grassroots organization Owe Aku. Owe Aku, Moccasins on the Ground, and Protect the Sacred are preparing communities to resist the Keystone XL pipeline through Keystone Blockade Training.

This unprecedented unity of tribes against the desecration of Ina Maka (Mother Earth) was motivated by the signing on January 25, 2013, of the historic International Treaty to Protect the Sacred Against the Tar Sands. Signatories were the Pawnee Nation, the Ponca Nation, the Ihanktonwan Dakota and the Oglala Lakota. Since then ten First Nations Chiefs in Canada have signed the Treaty to protect themselves against tar sands development in Canada.

The above sovereigns notify President Obama to consult with each of them because of the following:

The nations have had no direct role in identifying and evaluating cultural resources.

The nations question the status of the programmatic agreement and how it may or may not be amended.

The nations have no desire to contribute to climate change, to which the pipeline will directly contribute.

The nations deplore the environmental impacts of tar sands mining being endured by tribes in Canada. The pipeline would service the tar sands extractive industry.

The nations insist that their treaty rights be respected⎯the pipeline would violate them.

The nations support an energy policy that promotes renewables and efficiency instead of one that features fossil fuels.

The nations regard the consultation process as flawed in favor of corporate interests.

The sovereigns of these nations contend that it is not in America's interest to facilitate and contribute to environmental devastation on the scale caused by the extraction of tar sands in Canada. America would be better served by a comprehensive program to reduce its reliance on oil, and to invest in the development and deployment of sustainable energy technologies, such as electric vehicles that are charged using solar and wind power.

If the Keystone XL pipeline is allowed to be built, TransCanada, a Canadian corporation, would be occupying sacred treaty lands as reserved in the 1851 and 1868 Fort Laramie Treaties. It will be stopped by unified resistance.

To sanctify their solidarity with The Lubicon Lake First Nation of Canada, who are the traditional stewards of the land that 70% of the tar sands oil sit on, along with tribes across Canada and The United States, Chief Arvol Lookinghorse has called for a day of prayer everywhere on May 18, 2013. Chief Lookinghorse, The 19th Generation Keeper of The Sacred White Buffalo Bundle, has stated,

"I am asking 'All Nations, All Faiths, One Prayer' to help us during this time of this gathering by praying with us on this day wherever you are upon Mother Earth. We need to stop the desecration that is hurting Mother Earth and the communities. These recent spills of oil are affecting the blood of Mother Earth; Mni wic'oni (water of life)."

Gatherings are being planned all over the world in solidarity during the weekend including one outside the UN at Isaiah's Wall in NYC today, May 17th at noon EST.

We all know that we are living in unprecedented times. We just surpassed 400ppm CO2 in the atmosphere for the first time in 10 million years, the planet is warming and we humans must bear the responsibility of our actions and their effects on the environment. What we do, and what we don't do will effect the generations to follow. A better world is possible.