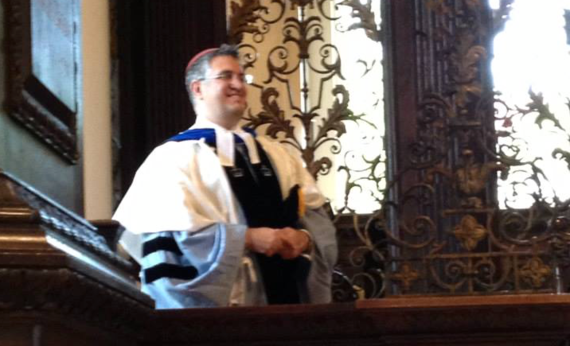 What happens when a rabbi and a leader of Jewish community is invited to give a guest sermon at Harvard's Memorial Church on a date that turns out to be 'Christ the King Sunday' in the Christian liturgical calendar? -- when the reading in churches all over the world is Pontius Pilate's exchange with Jesus: "Are you king of the Jews?" "You say so."

You can hear what I made of the opportunity here, in a sermon on The Delights and Dangers of Sovereignty.

Meanwhile, in our Torah-reading this week -- in which our ancestor Jacob acquires the name Israel -- Jacob sends messengers and gifts to his fearsome brother, Esau, in a dicey and fraught rapprochement, which, far from bringing the siblings together ultimately, ends with them agreeing to go different ways.

The prophetic reading for the week, Obadiah 1:1-21, with its rebuke of Edom, referencing the time of Jerusalem's devastation -- "How could you gaze with glee on your brother that day, on his day of calamity? How could you gloat over the people of Judah on that day of ruin?" -- became particularly poignant through the ages as rabbinic tradition identified Edom, Esau's progeny, as Rome, and later as Christian Europe.

What goes around comes around, is the prophet's message: "For the outrage to your brother, Jacob, disgrace shall engulf you, and you shall perish forever," and "Should you nest as high as the eagle, should your eyrie be lodged among the morning stars, even from there I will pull you down, declares the Lord."

Well, that is one kind of hope for the future. And we live in a world today that seems rife with such globalizing or totalitarian religious vision, as though spirituality were a zero sum game, and the world big enough for only one experience of divine dominion.

Even the vaunted message to the Jews from a former Pope, on the occasion of his visit to the great synagogue in Rome, concealed such a barb. Suggesting, by way of quotation from Pope Paul VI's conciliatory Nostra Aetate, that the Church, by "searching into her own mystery" could best understand its relationship with Judaism, Saint John Paul II declared to the assembled Jews, "In a certain way, it could be said that you are our elder brother." Of course, in the biblical story, the elder brother, consistently superseded, is first Ishmael and then Esau -- as opposed to the younger sibling who is chosen: in succession, Isaac and then Jacob. So what was the Pontiff actually saying with respect to the Church's ages-old claim of being Verus Israel, the true line of Israel?

Is global one-upmanship and deadly sibling rivalry all we can and should expect of religion in our times?

Is the Jerusalem of today, in which one can stand in one spot and hear the trumpeting of rams' horns, and muezzins' calls to prayer, and the pealing of church bells, all at once, an unfortunate reality -- or might it be instead the way God likes to hear the world?

"It seems to be God's will that there be many religions," Rabbi Abraham Joshua Heschel once observed.

I concluded my own words in Harvard's Memorial Church this way:

More and more I believe that the only territory in which one truly can cause the Divine to reign is the kingdom of one's own heart. And more and more I believe that the more truly we effect that kind of coronation -- and perhaps this is the test of it -- the more love and acceptance we have for one another. Or, to borrow words from the rabbinic liturgy: the more we receive the yoke of he kingdom of heaven from one another, and the more we give permission to one another to sanctify the Divine in peace of spirit, each and every voice being distinct, beloved, and essential.

In short, the awareness that follows, or can follow, from the experience of enthronement of the Divine in one's own heart is that there must be exactly as many conceptions of the Divine Sovereign as there are hearts, as there are true subjects of divine sovereignty.

Am I describing a picture of perfect loneliness and complete solipsism, each of us isolated in her or his own separate, sacred reality, ever alien from one another?

On the contrary, I hope that I am describing a picture of intense and exciting communication, and let that be my prayer today -- for every codex penned in a monk's cell, and every dream whispered on a lover's pillow, for every sacred cantata inscribed upon a musical staff, 'Soli Deo Gloria,' every hymn shared and every holy chant intoned to add to a grand adventure, a vision of visions, a Song of Songs, from which we all can learn, all of us according to our own hearts, not being effaced but being inspired. For if we learn to live that way, then as to divine sovereignty, "the earth will be full of knowing the Eternal One as waters cover the sea." (Isaiah 11:9)