Directly after 9/11, there was a small spurt of sanity regarding the reasons why American had just suffered the worst terror attacks of its short history. Chalmers Johnson wrote an excellent book about it, called Blowback that outlines the causes and effects of American Empire.

Sadly, that brief period in which we actually attempted to discern the root causes of terrorism was snuffed out by a tidal wave of groupthink nationalism, engendering classics like "freedom fries" and "they hate us because we're free." 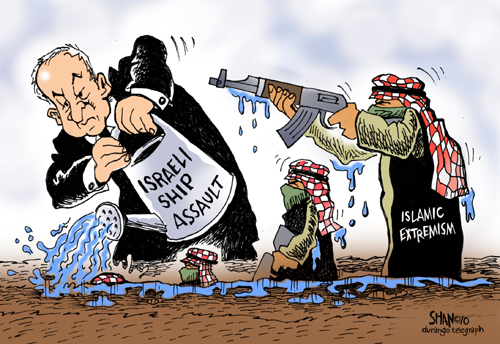 Israel's boneheaded attack on a group of civilian ships carrying aid for Gaza might have been a chapter in Johnson's book illustrating exactly the right way to not only create a new generation of Islamic extremists, but enrage just about everyone else.

Leaving aside the larger question of the blockade's legitimacy, the entire episode could have been handled without drama. Israel could have allowed the boats to dock at Gaza, then distributed the aid or confiscated any alleged weapons without compromising their need determine what was on the ships in the slightest. Instead, in seeming oblivious imitation of the Bush Doctrine, Israel sent heavily armed assault teams abseiling against a group of unarmed activists, including an 18-month-old child, the Irish Nobel peace laureate Mairead Corrigan Maguire, and an elderly Jewish survivor of the Holocaust.

Worse, the Obama administration has been forced into a mediating position between our allies Turkey and Israel, completely derailing a peace process already on life support.

As the controversy inevitably pivots into squabbles about a state's right to defend itself, Israel's serial inability to see that using a sledgehammer only makes the problem worse is as frighteningly obvious as it is maddeningly, infuriatingly... unsurprising.