A Russian Soyuz spacecraft carrying an American astronaut, an Italian astronaut and a Russian cosmonaut will launch on the second-ever express trip to the International Space Station today (May 28).

NASA's Karen Nyberg, the European Space Agency's Luca Parmitano and Russia's Fyodor Yurchikhin are scheduled to launch to space from the Baikonur Cosmodrome in Kazakhstan onboard a Russian Soyuz spaceship at 4:31 p.m. EDT (2031 GMT), arriving at the space station about six hours later.

Nyberg, a veteran of a brief visit to the space station during a previous space shuttle flight, said she's looking forward to actually living in orbit this time. "I visited space station in 2008 on the space shuttle Discovery, and it was a very, very quick trip, only 14 days, and honestly, I don't really remember a lot of it because it just flew by so fast," Nyberg told SPACE.com. 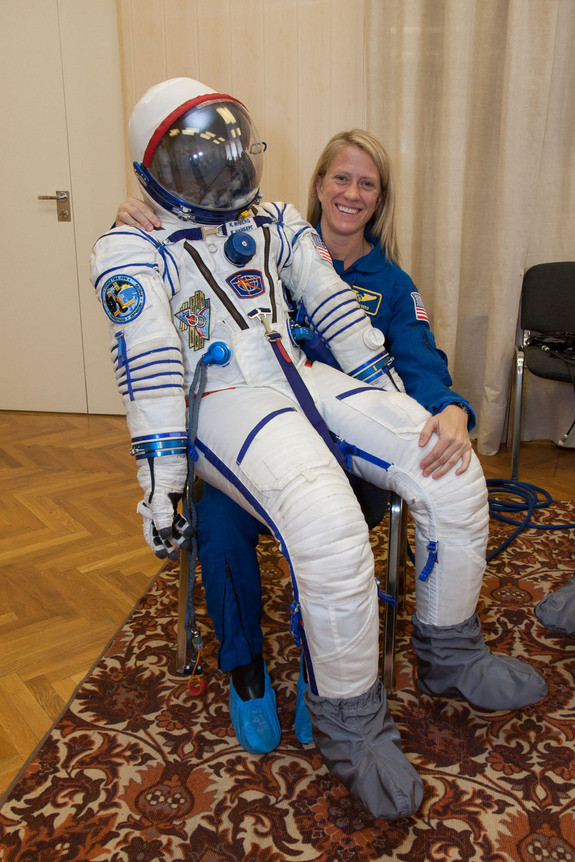 NASA astronaut Karen Nyberg, Expedition 36/37 flight engineer, poses with the Russian Sokol spacesuit she will wear during her trip to the International Space Station. Liftoff set for May 28 (EDT), 2013.

Although Nyberg is beginning a long stay aboard the station (about six months), her trip to the orbiting outpost will be much quicker than usual. Usually it takes about two days for a Soyuz to reach the International Space Station, but the three astronauts launching today will need to make only four obits of the Earth before docking to the station's Rassvet module.

"We will be doing four-orbit rendezvous, a quick rendezvous, it's so-called," Parmitano said in a pre-flight NASA interview. "Instead of waiting in orbit for two days before docking to the station after launch, right after launch we will get the spacecraft ready to just inject in higher orbit and then dock on the station, only six hours after launch."

Unmanned cargo ships do these express launches and dockings regularly, but this will mark just the second time a manned crew has flown to the station this quickly.

Parmitano, Yurchikhin and Nyberg will be able to compare notes about the quick trip with the three astronauts already onboard the space station. NASA's Chris Cassidy and Russian cosmonauts Pavel Vinogradov and Alexander Misurkin were the first group to launch and dock to the station in six hours. Together, the six astronauts make up the station's Expedition 36 crew.

Cassidy, Vindogradov and Misurkin are expected to fly back to Earth in September, while Nyberg, Yurchikhin and Parmitano are scheduled to stay on the station until November.

Soyuz Launch Today To Send Astronauts, Cosmonaut To ISS
Early Space Missions And The Astronauts Who Led Them