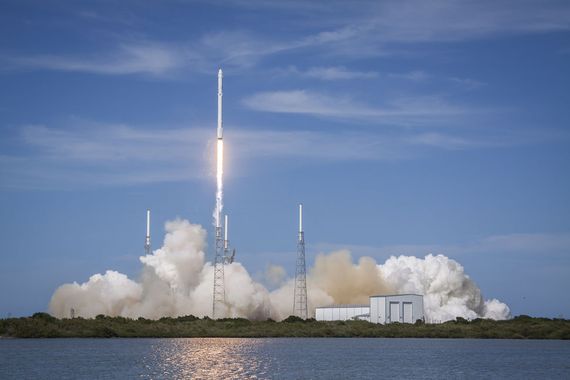 The Space Age has finally come and it promises savings for American taxpayers, new high-quality jobs and economic opportunities we can't predict yet. A sustainable, market driven economy is emerging from the stagnant cocoon of traditional governmental contracting. California-based SpaceX has been granted certification by the U.S. Air Force for launching military payloads, which will bolster the Hawthorne firm's already robust manifest of commercial and NASA launch contracts. This certification breaks a long-standing monopoly held by Boeing and Lockheed's rocket company conglomerate United Launch Alliance (ULA).

The loss of this military monopoly combined with pressure from SpaceX's efficient manufacturing processes and innovative work on rocket reusability has pressured the formerly moribund incumbent to rapidly adapt to the new competitive landscape.

After years of dismissing reusability as a pipe dream, ULA has announced they will design their new Vulcan rocket with recoverable engines. It is hard to overestimate the significance of this move from expensive government specified systems to modern, reusable rockets designed by commercial firms jockeying for competitive advantage. We are witnessing a shift in the economics of spaceflight that parallels the personal computer revolution. The unexpected "killer apps" that emerge from inexpensive and routine access to the final frontier may well drive another Silicon Valley-esque dot com boom.

Insiders refer to the commercial spaceflight business as New Space and the Golden State leads the world in creation of New Space firms. San Francisco based Planet Labs has raised investments of more than $160 million to launch a massive constellation of inexpensive satellites that can image the entire Earth on the daily. Sir Richard Branson's Mojave based Virgin Galactic has opened a new facility in Long Beach and is recruiting 100 additional employees, after bouncing back from a tragic flight test accident last fall. A number of entrepreneurs, including Musk and Branson are promising space based Internet networks that promise to connect everyone on Earth regardless of geographic or censorship.

Most importantly, unlike their Internet peers, New Space companies are generating thousands of high-paying jobs in California. National security regulations prevent these systems from being offshored and even China Aerospace and Space Technology Corporation has complained that they can't compete with SpaceX pricing. I must admit it's gratifying to see a Chinese product unable to compete with a Californian one on price! Musk's Hawthorne facility is packed with more than 3,500 employees building rockets literally day and night. These industrious Californians have cut the price of space launches by 2/3rds and reusability now promises a potential order of magnitude further reduction.

It is important to note that intelligent government policy choices did play an appropriate role here. SpaceX's Falcon 9 and its Dragon capsule were developed with backing from NASA's Commercial Orbital Transportation Services (COTS) program, an initiative established to secure a domestic system capable of resupplying the International Space Station after the retirement of the space shuttle. This relatively minor investment has paid off in spades. Dynamism, innovation and entrepreneurship have returned to the skies after decades of stagnation under the dominance of a torpid military-industrial-complex.

For years, ULA could simply profits from the legacy Delta and Atlas rockets they had inherited from Boeing and Lockheed. Under this monopoly, military launch prices rose to an astounding $400 million per mission. The new market reality created by SpaceX has put an end to this space launch inflationary spiral. At a recent Stanford talk ULA's new CEO, Tory Bruno, promised to lower prices and in congressional testimony he labeled the new competitive reality "a wise and a healthy change in the policy." Bruno's vision includes replacing their Russian engines with a radical new domestic design from New Space firm, Blue Origin as well as a promise to "to literally transform" ULA from a slow moving bureaucracy into a hypercompetitive technology company. He's already cutting fat at the top, an essential first move in the difficult cultural change that will be required to compete with SpaceX in a real market.

Meanwhile, the critics of New Space are looking painfully hypocritical. Alabama Congressman, Mike Rogers's recently said that while "he loves billionaires wanting to join the launch business," he worries that SpaceX might fail and therefore America should stick with our big budget federal rocket plans (and btw, the Russian engines they use). While a Republican advocating a governmental monopoly as the best way to insure success sounds peculiar, one need only understand that the New Space revolution threatens the construction of an unnecessary and overpriced new NASA rocket in his home state. Roger's pork barrel politics are all the more laughable in light of the recent billion dollar investment in SpaceX from Google and Fidelity Investments. Unless he thinks he's smarter than those guys.

The immediate benefactor of all this change is the American taxpayer who will finally get competitive pricing on launches of civilian and military space payloads that our citizens and soldiers depend on every day. Many new commercial startups will emerge to take advantage of the extra capacity and reduced pricing. NASA administrator Charlie Bolden, the White House, the DOD and New Space advocates in Congress, including California's Dana Rohrabacher are to be commended for supporting this bold plan to rebuild our nation's space dreams by unleashing market forces.

Kevin Cheberenchick is aerospace engineering student at USC and has worked in New Space.