Imaginary aliens abound on TV and in the movies while we listen hopefully for radio signals from other intelligent civilizations and fantasize about the bizarre forms of life that might exist on the thousands of newly found exoplanets.

Yet aliens are probably already here, in the form of fluffy, submicroscopic bits of dust from out of this world that were captured 10 years ago by NASA's Stardust spacecraft and parachuted to Earth in 2006. 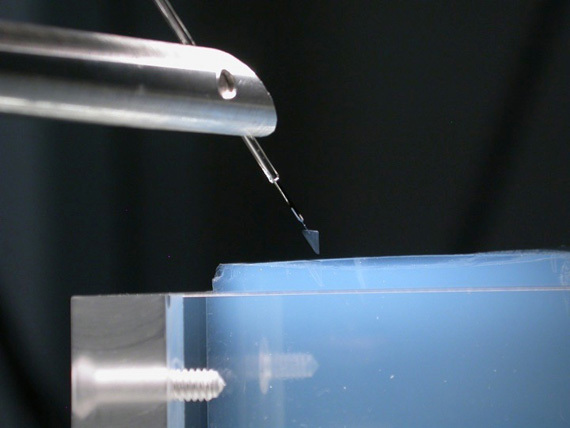 Removing a keystone of aerogel and the dust track it contains from a block of the lightweight material that was used in the Stardust collectors. Aerogel allowed the soft capture of interstellar dust grains. (Photo: Andrew Westphal/UC Berkeley)

It took eight years for a large team of scientists led by UC Berkeley physicist Andrew Westphal to locate and study the interstellar dust bits collected by Stardust, with the help of a large cadre of citizen-scientists who volunteered with Stardust@home to scan images of the aerogel collectors in search of tracks made by speeding dust.

Westphal and his colleagues, including over 30,000 "Dusters," announced Thursday, Aug. 14, in the journal Science their discovery of seven dust motes probably from outside our solar system, visitors from a distant star and likely produced less than 100 million years ago, perhaps in an exploding star.

While the team cannot say unequivocally that the dust particles are from interstellar space, the particles hit the collectors from the right direction -- the direction of the incoming interstellar wind -- and they have elemental signatures consistent with an origin outside our solar system.

"We seem to be getting our first glimpse of the surprising diversity of interstellar dust particles, which is impossible to explore through astronomical observations alone," said Westphal, who works at Berkeley's Space Sciences Laboratory.

Truth be told, we are probably surrounded by bits of interstellar dust; we just can't distinguish them from the other dust in the solar system, like that in comets, which dates from 4.5 billion years ago and much of which condensed into the Sun, the planets and us.

"This dust is relatively new, since the lifetime of interstellar dust is only 50 to 100 million years, so we are sampling our contemporary galaxy," said UC Berkeley research physicist Anna Butterworth. 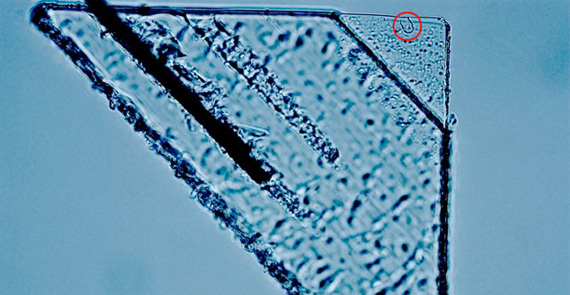 The largest interstellar dust track found in the Stardust aerogel collectors was this 35-micron-long hole (red circle) produced by a 3-picogram mote that was probably traveling so fast that it vaporized upon impact. The other two likely interstellar dust grains were traveling more slowly and remained intact after a soft landing in the aerogel. (Photo: Andrew Westphal/UC Berkeley)

If the dust particles -- three found in aerogel collectors and four found in the foil that encased them -- pass other tests, such as oxygen-isotope analysis, scientists can begin to amass a collection that will span the varieties of dust from outside our solar system. Rhonda Stroud of the Naval Research Laboratory noted that only 5 percent of the foil has been screened for dust grains, so the potential is there to find dozens more particles. Barely more than half the aerogel collectors have been scanned and put online at Stardust@home, so Dusters have a lot more work to do.

"A critical aspect of this was the dedication and hard work of the citizen scientists who worked on this," Westphal said. "We couldn't have done it without them."

In fact, two of those Dusters, Bruce Hudson from Midland, Ontario, Canada, and Naomi Wordsworth from Wexbury, South Buckinghamshire, United Kingdom, were allowed to name the interstellar particles they found: Orion and Hylabrook, respectively. They are listed with the 66 scientist co-authors of the Science paper. Weshphal himself discovered the third interstellar dust track in the aerogels and called it Sorok, the Russian word for 40, the number attached to the track.

Until astronomers detect signs of life on Earth-like plants around Sun-like stars, or until SETI searches record an old TV show broadcast by a civilization circling another star, we will have to be satisfied with these tiny, fluffy space aliens.