Everyone knows the universe exists in three dimensions, right? Maybe not. For some time now serious physicists have been pondering the seemingly absurd possibility that three-dimensional space is merely an illusion--and that we actually live in a two-dimensional "hologram."

And now scientists at the Fermi National Accelerator Laboratory in Illinois have launched a mind-blowing experiment to show once and for all what sort of universe we live in.

"We want to find out whether space-time is a quantum system just like matter is," Dr. Craig Hogan, director of Fermilab's Center for Particle Astrophysics, said in a written statement. "If we see something, it will completely change ideas about space we've used for thousands of years."

According to quantum theory's uncertainty principle, it's impossible to know both the precise location and the exact velocity of a subatomic particle. If the same uncertainty principle applies to space as well as to matter, space too should have built-in fluctuations--a.k.a. "quantum jitter" or "holographic noise," according to the statement.

The 21 scientists involved in the experiment will look for the jitter with the help of an exquisitely sensitive device known as a Holometer. It produces laser beams 200,000 times brighter than a laser pointer and, with the help of an optical technique known as interferometry, measures jitter in the beams as small as a few billionths of a billionth of a meter. 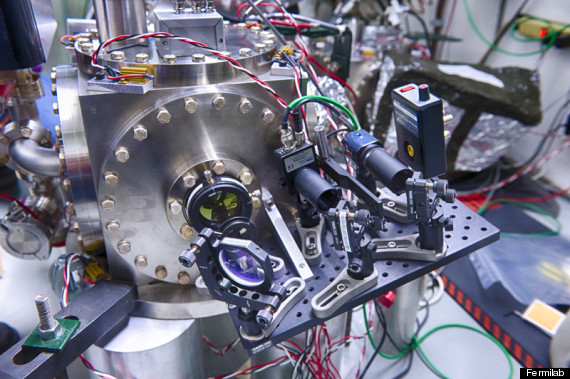 A close-up of the Holometer at Fermilab. 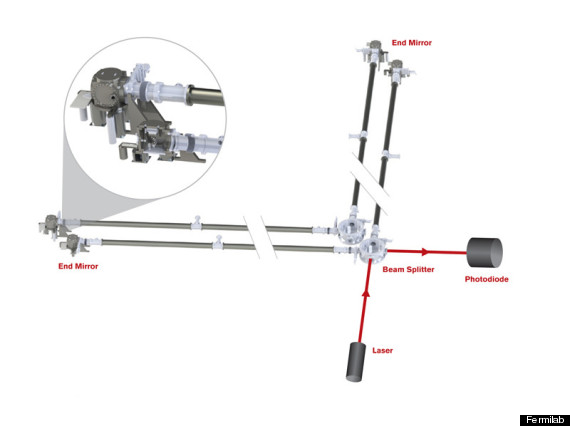 The holometer includes two interferometers in 6-inch steel tubes about 40 meters long. Optical systems (not shown here) in each one “recycle” laser light to create a steady, intense laser wave. The outputs of the two photodiodes are correlated to measure holographic jitter.

"If we find a noise we can't get rid of, we might be detecting something fundamental about nature--a noise that is intrinsic to space-time," Dr. Aaron Chou, the experiment's lead scientist and project manager for the Holometer, said in the statement. "It's an exciting moment for physics. A positive result will open a whole new avenue of questioning about how space works."

The prospect of making a discovery that would not only defy common sense but also overturn centuries of scientific thinking has Chou thinking in philosophical, almost mystical terms.

"I have always believed that if indeed there is a creator, then the mechanism by which the world was created is not necessarily unknowable, and if we delve deeply enough we might reach some very interesting and inescapable conclusions," Chou told The Huffington Post in an email. "This topic brings up all sorts of interesting philosophical and theological questions which are perhaps better discussed over a beer or a nice cup of tea. In the meantime, we scientists have a job to do."