This past week we had a sad and harsh reminder that when it comes to space exploration, no undertaking can be considered "ordinary," and success is never guaranteed.

On Friday, Virgin Galactic's SpaceShip Two exploded in California's Mojave Desert, killing one pilot and badly injuring a second one (Figure 1). This was apparently the result of a device intended to slow down the spaceship, operating too soon. 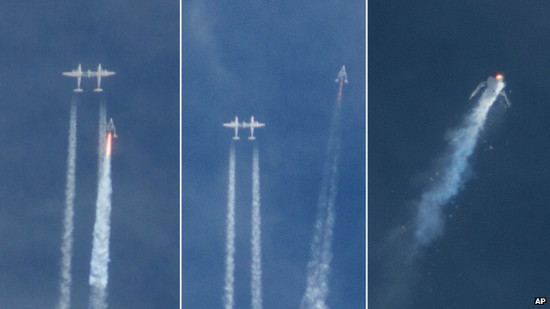 Earlier in the week, on Tuesday, the unmanned supply rocket Antares of Orbital Sciences Corporation, was exploded shortly after its launch from NASA's Wallops Flight Facility in Virginia (Figure 2). This rocket was carrying cargo to the International Space Station, but when a serious problem developed, it was intentionally detonated prior to impacting the ground. 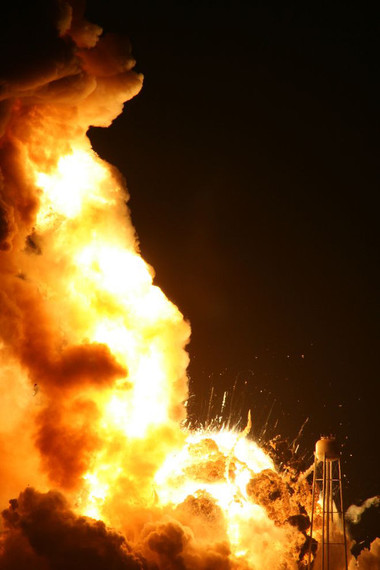 We should also remember that of the total of 135 Space Shuttle flights, two ended in major tragedies -- with the loss of lives of fourteen astronauts and of Space Shuttles Challenger and Columbia. In addition, a number of shuttle missions, such as STS-2, STS-44, and STS-83, were cut short because of equipment failure.

There is essentially no stage in a space mission that does not involve considerable risks. Both the U.S. and Russia have experienced great disasters, even in training and pre-launch activities. Then there are the known dangers of liftoff, re-entry, and landing. Yet, all of these hazards and uncertainties have neither extinguished nor even diminished human curiosity and the urge to explore. In some cases, such as the Apollo 13 mission and the first servicing mission to the Hubble Space Telescope, malfunctions became the source of ingenuity for scientists and engineers, and the impetus for heroic acts by the astronauts. Similarly, the successful landing of the "Curiosity" rover on Mars, following the famous "Seven Minutes of Terror," has by now become an origin of inspiration for many space missions.

While the potential for various mechanical and electronic failures is always on the mind of everyone involved with large and ambitious space endeavors, such as the upcoming James Webb Space Telescope, these are always treated as challenges that need to be overcome, rather than as deterrents. In this sense, I believe that all the scientists, engineers, and astronauts involved in space science and inquiry, fully subscribe to the famous words of President John F. Kennedy when he described the goals for the space effort on September 12, 1962:

"The hazards are hostile to us all. Its conquest deserves the best of all mankind, and its opportunity for peaceful cooperation may never come again... We choose to go to the Moon... and do the other things, not because they are easy, but because they are hard, because that goal will serve to organize and measure the best of our energies and skills, because that challenge is one that we are willing to accept, one we are unwilling to postpone, and one which we intend to win."