Call it one giant leap for robot kind: A small talking robot launched into space aboard a Japanese cargo ship Saturday (Aug. 3) to keep astronauts company on the International Space Station.

The Japan Aerospace Exploration Agency (JAXA) launched the humanoid Kirobo "robot astronaut" into orbit from the Tanegashima Space Center in southern Japan as part of nearly 3.5 tons of supplies and equipment to resupply the space station's six-person crew.

Kirobo was packed inside Japan's unmanned HTV-4 (Kounotori 4) cargo ship when it launched into orbit atop the country's H-2B rocket at 3:48 p.m. EDT (1948 GMT), though it was early Sunday morning (Aug. 4) Japan Standard Time at the time of liftoff. The HTV-4 spacecraft will arrive at the space station on Aug. 9. [See photos of Japan's nighttime HTV-4 space launch] 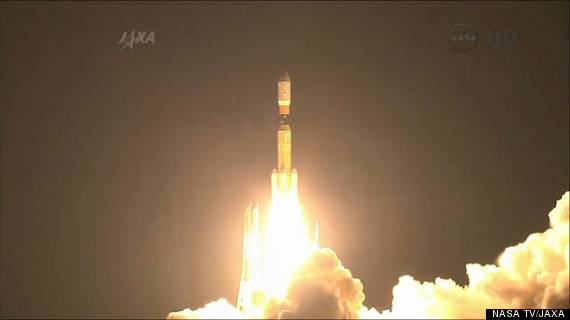 The Kirobo space robot is a diminutive mechanical person just 13 inches (34 centimeters) tall built to converse with astronauts on long space voyages. The robot, and its ground-based counterpart Mirata, are part of the Kibo Robot Project to study human-robot interaction technology. Kirobo speaks Japanese and is expected to talk to JAXA astronaut Koichi Wakata when he arrives at the space station in November.

Kibo, which means "hope" in Japanese, is the name of Japan's research laboratory module aboard the International Space Station. The name of Kirobo is a merging of Kibo and robot, project officials have said.

Kirobo and Mirata were built by scientists and engineers at the by the University of Tokyo's Research Center for Advanced Science and Technology. Both robots come equipped with voice-recognition and face-recognition technology, as well as a camera, emotion recognition and natural language processing. The Toyota Motor Corp., Robo Garage and the public relations company Dentsu Inc. are partners in Kibo Robot Project.

"I want to help create a world where humans and robots can live together," Kirobo said when asked what its dream is by an official from Toyota Motor Corp., during the Kibo Robot Project's press unveiling in late June. 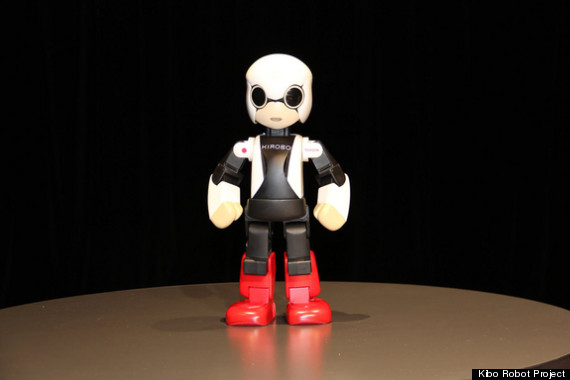 Kirobo is just one piece of cargo among the thousands of pounds riding to the space station aboard Japan's HTV-4 spacecraft. Included among the 3.5 tons of cargo aboard are about 1,880 pounds (852 kilograms) or spare part and new experiment supplies to be attached to the station's exterior. [Japan's HTV Cargo Ships Explained (Infographic)]

"Among the items within Kounotori's pressurized logistics carrier are test samples for research experiments inside the Kibo laboratory, a new freezer capable of preserving materials at temperatures below -90 F, four small CubeSat satellites to be deployed from Kibo’s airlock as well as food, water and other supplies for the station’s crew," NASA officials said in an update. "The pressurized section also is delivering new hardware for the Robotic Refueling Mission to demonstrate robotic satellite-servicing tools, technologies and techniques."

This is the fourth mission for JAXA's HTV program (the name is short for H-2 Transfer Vehicle) since 2009. The cylindrical disposable spacecraft are built to haul up to 6 tons of cargo to the International Space Station and then be discarded at the mission's end. 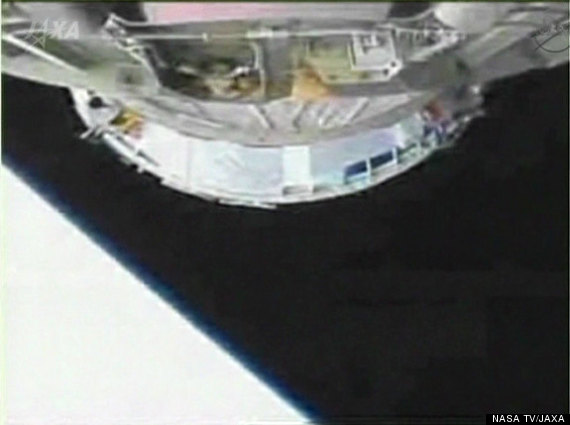 HTV craft are called Kounotori (Japanese for "White Stork") and are about 33 feet long by 14.4 feet wide (10 by 4.4 meters). They carry supplies and equipment inside a pressurized section, which astronauts can access after the vehicle links up with the station. They also have an unpressurized section that can be accessed via the station's robotic to retrieve spare parts and other larger gear that can be stored on the orbiting lab's exterior.

The Hawthorne, Calif.-based SpaceX has already launched two of 12 planned delivery flights for NASA using its Dragon space capsules as part of a $1.6 billion deal with the U.S. space agency. Unlike all other robotic cargo ships serving the station, SpaceX's Dragon capsules can also return hardware and experiments to Earth.

NASA also has a $1.9 billion deal with the Dulles, Va.-based Orbital Sciences Corp. for at least eight delivery flights using the company's new Antares rocket and Cygnus spacecraft. The Antares rocket flew its first test flight in April and is slated to launch the maiden Cygnus delivery mission to the space station in mid-September.

NASA officials said the space station crew watched the HTV-4 launch via a live video link while soaring 260 miles (418 kilometers) over southwest Russia. The Japanese cargo ship will be captured via robotic arm on Friday, Aug. 9, at 7:29 a.m. EDT (1129 GMT) and be attached to the space station at about 9:30 a.m. EDT (1330 GMT).

You can watch the Japanese cargo ship's arrival live on SPACE.com on Friday, courtesy of NASA TV.