As Obama moves into the White House, artist and yogini Sarah Tomlinson recommends a Sun yantra painting placed on the East wall of the Oval Office to cultivate success during his presidency.

"Obama is presenting the country with a wave of courage and confidence much needed by the public," she says. "His sunny optimism would be reflected back to him beautifully with this radiant design." 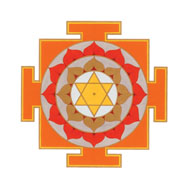 A yantra is a scared geometric symbol used for active meditation. Each yantra is composed of a unique configuration of shapes and colors that produce a specific healing effect when meditated upon. Sitting in lotus position and chanting "om"is just one of the paths to inner peace. For the antsy or creative set, active meditation could be another spiritual pursuit. Tomlinson teaches active meditation through her yantra paintings in New York and around the world.

"Placing a yantra in specific areas has a huge impact on our energy and direction in life," Tomlinson says. "As do the colors, furniture and organization of the living space around us." 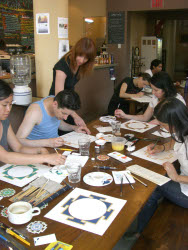 This sought after redhead paints and teaches yantra classes symbolizing 15 Hindu goddesses or the nine major planets (Sun, Moon, Mars, Mercury, Venus, Saturn, Jupiter and the North and South Nodes of the Moon, Rahu and Ketu). Tomlinson learned this sacred art from the late tantric master and artist Harish Johiri, during the last few years of his life. Spending months at his home in India, Tomlinson learned a step-by-step method. Before Johiri left his body, he gave Tomlinson his blessing to teach this practice to the West. I've taken a few yantra classes with Tomlinson and it's always a heady mix of professionals game for the 8-hour class -- from makeup artists to HBO producers to Thai massage masters, and an assorted lot of media types.

For optimum affect, yantras should be placed where you need a surge of positive energy and in the correct planetary alignment. Fellow Brit and facialist to the stars Tracie Martyn commissioned Tomlinson for five yantras to empower her bustling beauty salon. For Martyn's treatment room, a Venus yantra promotes beauty, harmony and bliss. A Saturn yantra hangs in her partner's Marius Morariu's office space, to enhance productivity and organization. 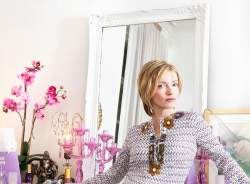 "The beautiful yantras are a wonderful way of being reminded of the higher powers at work,"says Martyn. "We aim to create an all over holistic restorative experience."

For Tomlinson, the goddess Durga and planet Venus are the most requested yantra commissions from clients -- and for good reason. Durga is the mighty goddess with the ability to remove negativity and cultivate compassion. Its striking design of nine triangles blended with orange hues energizes a space to make way for strength, clarity, love and direction. The planet Venus in pastel blue and mauve tones soothes and uplifts the senses. 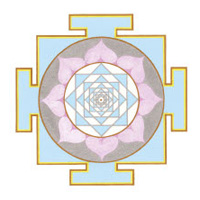 For deeper study, Tomlinson offers students a two-week adventure to India with lodging at the home of Johiri's daughter. On the itinerary is daily yoga, healing cuisine, yantra painting and pilgrimages to sacred sites.