WASHINGTON -- Flying from the Kennedy Space Center in Florida, the Space Shuttle Discovery piggy-backed on a jumbo jet bound for Dulles International Airport in Virginia on Tuesday morning en route to retirement at the Smithsonian.

Since Discovery's exact flight plan was not released prior to its arrival in the D.C. region, it was hard to predict exactly when and where to to be in position to see the space shuttle.

But NASA said that places like the National Mall and Alexandria waterfront were good bets to spot the shuttle.

Downtown, people streamed southward mid-morning toward the Mall and Potomac waterfront as others flocked to office building roofs as reports that Discovery, which weighed roughly 700,000 pounds at takeoff, was making passes through the nation's capital.

The space shuttle's final home will be the Smithsonian Air and Space Museum's Udvar-Hazy Center in Chantilly, Va.

As DCist reports, Discovery arrived about a half hour ahead of schedule.

"It was thrilling," Betty Ellis, who'd come to watch Discovery with some coworkers, told The Huffington Post on the Alexandria, Va., waterfront. Ellis had once seen a shuttle launch in Florida, but said this was better.

It did. Twice more before 10:30 a.m. Which made Harold Doran, whose 40th birthday it was, very happy.

"It's a special celebration," he said.

Great photo of #Discovery as it flies over Dulles. Now flying over DC. Will land here in 45 minutes. @smithsonian pic.twitter.com/podOcSt6 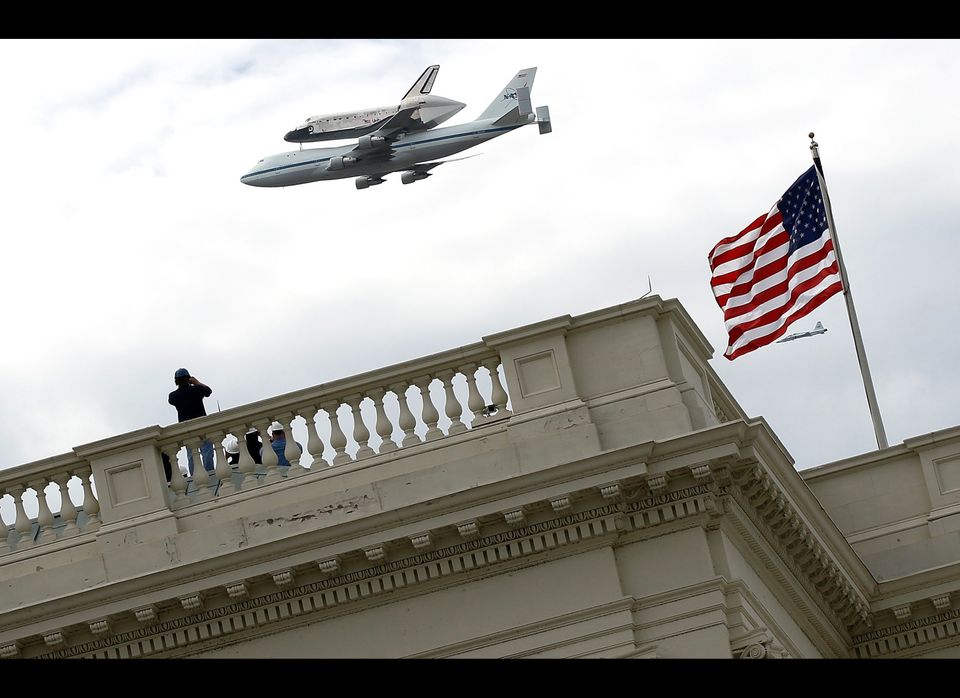 1 / 42
Space Shuttle Discovery
Space Shuttle Discovery, mounted atop a 747 shuttle carrier aircraft, flies over the U.S. Capitol during a flyover of the nation's capital on its final trip to its retirement place April 17, 2012, in Washington, D.C. The longest-serving orbiter in the space shuttle fleet was flown from Kennedy Space Center in Florida to the Washington, DC area to be transferred to the Smithsonian National Air and Space Museum and will be placed on display in the museum's Steven F. Udvar-Hazy Center.
Getty