NASA's Space Shuttle program, officially called the Space Transportation System (STS), was the U.S. government's manned launch vehicle program from 1981 to 2011. The Space Shuttle is the only winged manned spacecraft to have achieved orbit and land, and the only reusable space vehicle that has ever made multiple flights into orbit. Officially designated as Orbiter Vehicle-105, the Space Shuttle Endeavour was the fifth and final orbiter to be built. In April 2011, NASA announced that the California Science Center would receive the Endeavour, one of four orbiters to go on permanent display with the conclusion of the Space Shuttle program.

On October 30, 2012, the Science Center became the permanent home of the Endeavour, which landed at Los Angeles International Airport (LAX) in September 2012. After an extraordinary journey through the streets of LA, the Endeavour went on public display in the Samuel Oschin Space Shuttle Endeavour Display Pavilion. “Endeavour belongs to all of us and was part of a fleet of vehicles that defined America’s human space exploration for the past 30 years," said Kenneth E. Phillips, Ph.D, the Science Center’s Curator for Aerospace Science. "It represents the best that we can do as human beings when we choose to work together.”

Visiting the Endeavour requires a timed ticket, which only costs $2. Another ticket option includes the Endeavour plus an IMAX movie screening.

To help you make the most of your visit, Dr. Phillips shares his thoughts on ten must sees and hidden gems of the Space Shuttle Endeavour.

Click through the slideshow below to see 10 hidden gems. 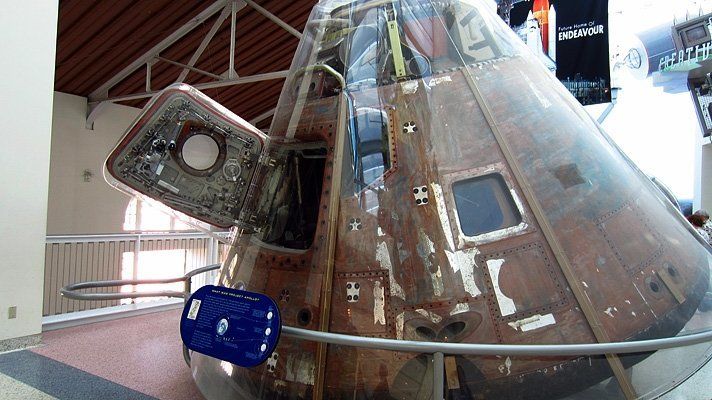 1 / 11
1. NASA SPACE CAPSULES
Before you begin your Endeavour experience, don’t miss the remarkable trio of NASA space capsules in the Air and Space Gallery, on loan from the National Air and Space Museum, Smithsonian Institution. “The Science Center is one of the only museums in the entire country to feature flown space capsules from all three pre-shuttle programs, including Mercury, Gemini and Apollo,” said Dr. Phillips. In 1961, the Mercury-Redstone 2 capsule took a chimpanzee named Ham into space in preparation for a human launch. The center's Gemini 11 was flown into space by Pete Conrad and Dick Gordon in September 1966. The Apollo capsule on display is the actual Apollo-Soyuz Command Module that docked with Russia's Soyuz spacecraft in July 1975. The Space Shuttle experience begins with Endeavour: The California Story, a companion exhibit that celebrates Endeavour’s many scientific achievements and its strong connection to Southern California, where all the orbiters were built. The California Story includes images of Endeavour under construction locally in Palmdale and Downey, as well as artifacts that flew into space aboard Endeavour.
Daniel Djang