When Space Shuttle Endeavor lifts off from the launch pad at Kennedy Space Center next week as scheduled, it will be unusually notable. First, it's the second-to-last launch of a shuttle, before the whole program is retired later this year. Second, the craft's commander, Mark Kelly, is the husband of Rep. Gabrielle Giffords, who was nearly killed by a gunman in February.

Otherwise, however, a launch has become a somewhat common event (thanks to the shuttle's reusability), one that for most Americans is signaled by nothing more than a brief blip on the news and footage of the ship blasting out of a cloud of light and fire. But a launch is still one of mankind's most complex and massive undertakings, a carefully-primed $1.3 billion explosion that turns years of planning and construction into a spectacle that lasts only a few moments. 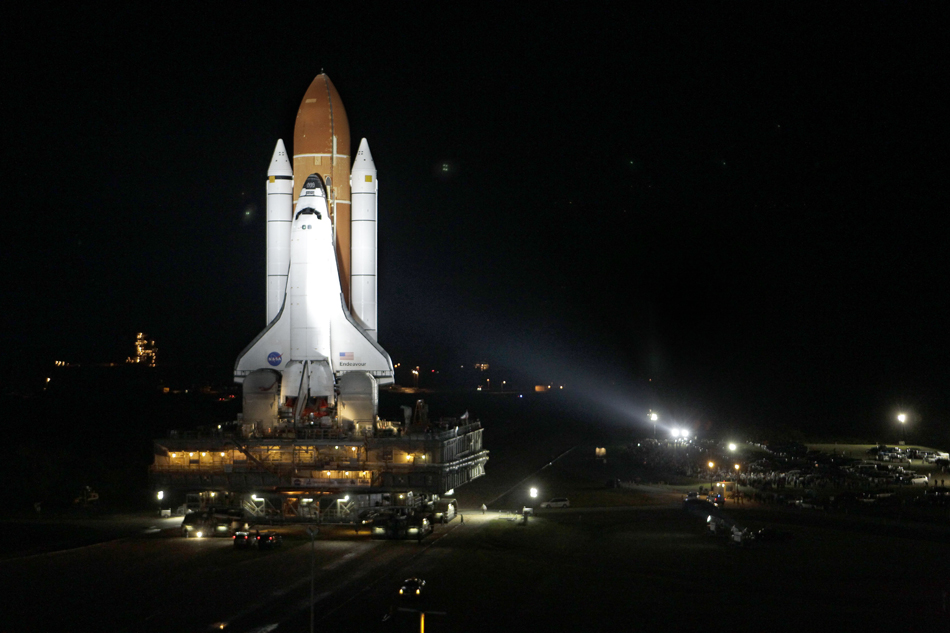 Space shuttle Endeavor moves slowly on it's journey from the Vehicle Assembly Building to launch pad 39A at the Kennedy Space Center in Cape Canaveral, Fla., Thursday, March 10, 2011. The launch of Endeavor is scheduled for April 19. (AP Photo/John Raoux)

To those who've witnessed it first-hand, it's the spectacle of a lifetime. People come to Florida from as far away as Michigan or Alaska or England or Italy, arriving in droves by car and motor home, toting binoculars, blankets and American flags. They line up along a worn river bank in the towns near the launch pad on Cape Canaveral, waiting for days, then nail-biting hours, to see a group of people embark on a completely different kind of journey, this one powered by rockets that do zero to 17,000 mph in 8.5 minutes.To the fans, this is the Super Bowl, NASCAR, the World Cup and Independence Day rolled into one. The astronauts strapped into the massive Space Transportation System aren't just rocket jockeys. They're rock stars.

Last year, when Space Shuttle Endeavor was scheduled to leave the Earth at night for the last time on its way to the space station, Motherboard.tv producer David Feinberg and I joined those throngs of space pilgrims. Inspired in part by films like "The Right Stuff" and the underground '80s documentary "Heavy Metal Parking Lot," we traversed Cape Canaveral and nearby Titusville in an attempt to capture the launch from multiple angles. We spent time behind the scenes with some folks at NASA, but our main focus was on the excitement of the fans who had come from far and wide for a grueling space shuttle tailgate party.

The long waits, cold weather, and even a 24-hour delay be damned. As the wait built among the dedicated campers who had assembled around campfires, on lawn chairs and behind cameras, their energy and excitement was infectious. Eventually, the lively camaraderie of the crowd and the anxious anticipation of watching mankind's most complex vehicle perched on a launch pad under flood lights miles away gives way to the breathtaking sight and sound of a shuttle igniting the placid dark of a Florida night, pounding its way into space and shaking every bone in your body.

It wasn't just fireworks. This, the fifth-to-the-last shuttle launch, was another bittersweet milestone at the end of a chapter in America's space story, an epic saga that began with the heady experiments of the space race and even now, on the eve of the space shuttle's final two launches, still extends into the future, towards dreams of heavy-lift rockets, asteroid landings and Martian colonies.

Lately, those dreams have smashed against the reality of the Obama administration's trimmed-down NASA budget, a new emphasis on commercial crews, and emerging doubts about the cost and relevance of manned spaceflight. Across the Space Coast, these shifts threaten to rock not only imaginations but livelihoods too. Locals worry about the deadening effect that the end of the shuttle program will have on an already depressed economy, and fans of spaceflight are left anxiously wondering where the country and humankind goes next. After next week's scheduled final launch of Endeavour, the final and 135th shuttle flight is set to launch in June. The shuttles will be packed up and shipped to museums, quiet testaments to a deafening dream of flight.

For now, there's simply no better place to see the awe, the excitement, and occasional frustration surrounding America's space project in its moment of twilight than from the crowded parking lots around Cape Canaveral -- the place where that dream, for a few moments, becomes an overwhelming, tear-jerking, mind-elevating reality.

Watch the documentary I produced, "Space Shuttle Parking Lot," and get tips for watching a launch, at Motherboard.tv or at CNN.com.