Is there a smiley face in space?

For almost 25 years, the Hubble Space Telescope has been both an invaluable tool for astronomers and a source of some of the most stunning images ever taken of celestial objects, from exploding stars to graceful galaxies.

And now Hubble has spotted a "face" smiling down on us from outer space. 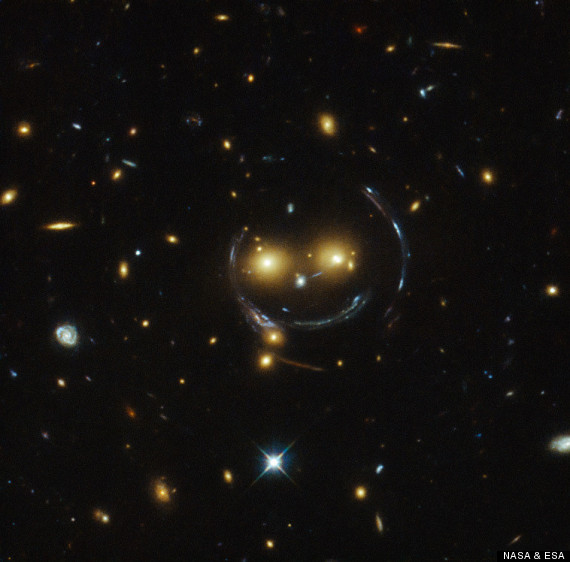 It's not a real face, of course, just the fortuitous arrangement of a group of galaxies. Known formally as SDSS J1038+4849, this grinning galaxy cluster contains trillions of stars and is located some 4.5 billion light-years from Earth in the constellation Ursa Major, according to Slate's Bad Astronomy blog..

The "eyes" are a pair of bright galaxies. The upturned "mouth," along with the arcs around the "face," are the result of gravitational lensing. This strange celestial phenomenon occurs when a the strong gravitational pull from a massive galaxy or galaxy cluster creates a warp in space-time. Any light that passes through this gravitational "lens" bends as it travels toward Earth.

Thus, when a light source, "lens," and an observer (like Hubble) are in perfect alignment, the light forms into arcs, called Einstein rings.

Phew! It's a bit complicated, but that face sure is beautiful!