Less than a year from now, NASA's New Horizons spacecraft will make the first-ever visit to Pluto, potentially revolutionizing scientists' understanding of the dwarf planet.

Because Pluto is so far away — it orbits the sun at an average distance of 3.65 billion miles (5.87 billion kilometers) — many questions about the dwarf planet's composition and activity remain unanswered. Researchers hope New Horizons will lay some of those questions to rest when it flies by Pluto on July 15, 2015.

"Many predictions have been made by the science community, including possible rings, geyser eruptions, and even lakes," Adriana Ocampo, program executive for NASA's New Frontiers program, said in a statement. "Whatever we find, I believe Pluto and its satellites will surpass all our expectations and surprise us beyond our imagination." [New Horizons' Flight to Pluto in Pictures]

Orbiting the sun once every 248 years, Pluto lies outside the reach of most visible instruments. The best images from NASA's famous Hubble Space Telescope simply show Pluto's spherical shape and reddish color. Changes in the dwarf planet's color patterns over the years hint that something is happening there, but no one knows exactly what. 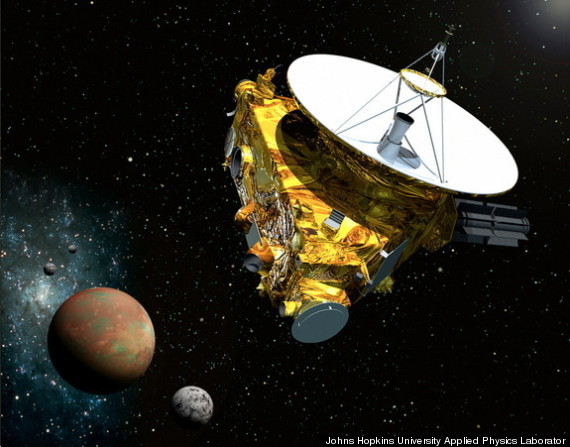 An artist's concept of the New Horizon's spacecraft with Pluto and three of its five moons.

By late April 2015, New Horizons will be close enough to Pluto and its moons to capture pictures rivaling those of Hubble. On July 14, 2015, the craft will make a close flyby of the icy world, ultimately zooming within about 6,200 miles (10,000 kilometers) of its surface. If it cruised past Earth at that range, New Horizons would be able to recognize individual buildings and their shapes.

"Because Pluto has never been visited up-close by a spacecraft from Earth, everything we see will be a first," Ocampo said. "I know this will be an astonishing experience full of history-making moments."

New Horizons principal investigator Alan Stern, of the Southwest Research Institute in Colorado, likened the upcoming visit to the way Mariner 4revolutionized understanding of Marsin July 1965. At the time, many people thought the Red Planet was a life-friendly world possibly harboring liquid water and even plants. The New Horizons flyby could change perceptions of Pluto just as dramatically, Stern said.

The flight in won't be without its challenges. Since New Horizons launched in 2006, two new moons have been discovered orbiting Pluto, upping the total known satellite countto five: Charon, Nix, Kerberos, Styxand Hydra. As many as 10 other moons could still await detection in the system, one study suggested.

According to simulations, meteorites striking Pluto's moons could send tiny rocks flying into space, where many of them would enter orbit around the dwarf planet. The debris field likely changes with time as it orbits, growing larger as new material is added. As the New Horizons probe gets closer and closer to Pluto, the mission team will need to keep watch on the system in case evasive maneuvers are required.

"The New Horizons team continues to do a magnificent job in keeping the spacecraft healthy and ready for this incredible rendezvous," said Ocampo. "The spacecraft is in good hands."