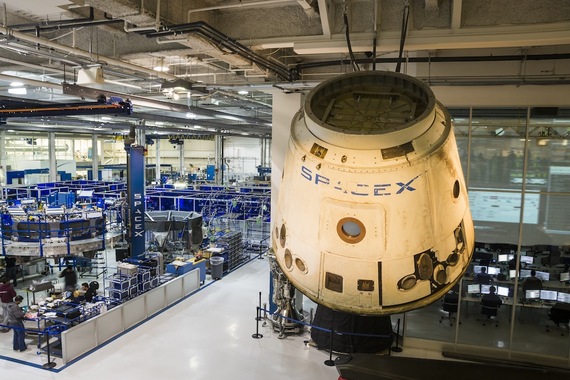 Early Monday morning a SpaceX Dragon capsule docked with the International Space Station (ISS) in a successful commercial resupply mission. Elon Musk's Hawthorne, California firm is now five for five on these missions, not counting two successful test flights. This demonstrated reliability is critically important for continued operation of the space station, which can no longer depend on the Space Shuttle's massive cargo capacity.

ISS can also receive deliveries from Russia's less dependable Progress vehicle as well as from the seldom-used Japanese Kounotori spacecraft. The other American option, Orbital Sciences' Cygnus craft, made two successful flights to ISS before suffering a catastrophic failure last October when the Russian engine in its Antares launch vehicle exploded immediately after take off from its Virginia launch pad. Orbital has decided to replace that engine with a newer Russian model while its spacecraft hitches rides from United Launch Alliance's, Russian powered Atlas V.

SpaceX also has an impressive half dozen commercial launches to its name and a manifest of launch orders from domestic and international clients stretching into the future. They've managed to do this the old fashioned way, by being cheaper, faster and more reliable.

Elon Musk's unlikely startup leveraged existing resources by securing a good deal on a boarded up Northrup-Grumman production facility and hiring from California's deep pool of aerospace talent. I've visited the SpaceX production facility many times over the years and watching it grow has been astoundingly impressive. There was a time when most of the activity in the massive factory was huddled in the corners and workers rode bicycles to get from one end of a mostly empty space to the other. In fact, they had the time and the space to film parts of Iron Man 2 inside that cavernous enclosure. Those days are long gone and you can hardly turn around in the factory without bumping into a spacecraft, rocket engine or one of the thousands of skilled SpaceX workers. The firm is expanding with operations in Texas, Florida and New Mexico and has hundreds of jobs openings posted. Approaching the space market like a consumer products business and building rockets on a rate of production rather than on a custom order basis, this all-American space company has been aggressively driving down costs in a way that even scares the Chinese.

The only truly American option for keeping American astronauts supplied is also the most likely candidate to save them from dependence on Russia for rides to the space station. The Dragon Version 2 is awaiting final tests from NASA to begin its taxi service under the agency's ambitious Commercial Crew program. Ironically, the main reason that hasn't already happened has been a NASA budget strangled by Congress and consumed by expensive payments to Russia. The other NASA candidate for the work, Boeing, has chosen to use the Russian powered Atlas V as its launch vehicle.

Meanwhile, SpaceX moves forward with each launch using an iterative development model, which recognizes that there are ideas which must be flight-tested, and some failures that must be tolerated. In that spirit, last week's launch included an attempt to return the Falcon 9 first stage to a soft landing on a hundred meter robotic platform in the Atlantic Ocean. That added test, while in no way distracting from the NASA contracted mission, was not entirely successful. Despite successfully bringing the 14-story tall first stage down from a high altitude hypersonic flight to the tiny target platform, the stage apparently came in a bit fast and crashed on impact. Photos of the relatively undamaged platform suggest the event was not at all catastrophic.

SpaceX's reason for trying this seemingly crazy stunt wasn't to win an entry in the Guinness Book of World Records, but rather to disrupt the economics of spaceflight by moving launchers from an expendable model to a sustainable and reusable model. This innovation has the potential to reduce launch costs by an order of magnitude and literally to shift human history into a higher gear. SpaceX does this important work on the side while running a profitable business in a field littered with the bodies of previous market entrants.

Given Elon's record at PayPal, Tesla and SpaceX, I would not bet against him succeeding the next time around, or the one after that. He and his whole team are to be congratulated for the work they do, the jobs they provide and the can-do attitude that keeps them experimenting. His growing success suggests we should all reconsider the dominant business paradigm that chases cost savings abroad, disconnects R&D from outsourced production, prioritizes short-term profits over long-term investments and places processes above personalities.