A privately built robotic space capsule arrived at the International Space Station early Wednesday (Oct. 10) to make the first-ever commercial cargo delivery to the orbiting lab under a billion-dollar deal with NASA.

The unmanned Dragon spacecraft was captured by station astronauts using a robotic arm after an apparently flawless approach by the cargo-laden space capsule, which was built by the private spaceflight company SpaceX. It is the first of 12 resupply flights SpaceX will fly for NASA under a $1.6 billion deal.

"Looks like we've tamed the Dragon," station commander Sunita Williams said as the spacecraft was captured by a robotic arm. "We're happy she's onboard with us. Thanks to everyone at SpaceX and NASA for bringing her to us … and the ice cream."

The astronauts' chocolate-vanilla swirl ice cream, a rare treat for the space station crew, was a last-minute item packed along with the nearly 1,000 pounds (453 kilograms) of supplies riding up to the orbiting lab on the Dragon capsule. [Photos: SpaceX's Dragon Arrives at Space Station] 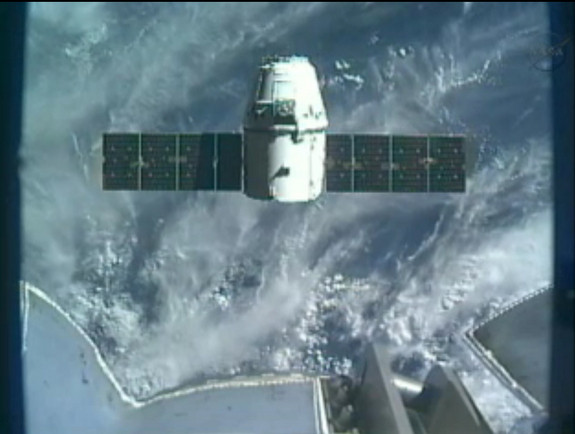 SpaceX's Dragon space capsule hovers just below the International Space Station's robotic arm in this view from an arm camera on Oct. 10, 2012, during the CRS-1 commercial cargo mission.


The SpaceX spacecraft was captured at about 6:56 a.m. EDT (1122 GMT) by Japanese astronaut Akihiko Hoshide as the space station soared 250 miles (402 kilometers) above the Pacific Ocean, just west of Baja California. The capsule will be attached to an open docking port on the station in the next few hours.

SpaceX launched the Dragon spacecraft into orbit on Sunday (Oct. 7) atop a Falcon 9 rocket (also built by the company) from a pad at Cape Canaveral Air Force Station in Florida. It is expected to spend at least three weeks linked to the space station and be filled with nearly 2,000 pounds (907 kilograms) of experiment results and station gear for the return trip to Earth.

SpaceX officials watched over the Dragon capsule's arrival from the company's mission control center in Hawthorne, while NASA monitored the orbital rendezvous from its station Mission Control at the Johnson Space Center in Houston. The spacecraft is expected to splashdown in the Pacific Ocean near Southern California on Oct. 28.

The station crew said Dragon was a welcome sight as it approached their orbital home.

"It's nice to see Dragon flying over the U.S.," Williams said during the space rendezvous.

With NASA's space shuttle fleet retired, the space agency is relying on private spacecraft to ferry supplies and astronaut crews to and from the International Space Station. SpaceX's Dragon is the first American spacecraft to launch to the space station since NASA's final shuttle mission in July 2011.

Wednesday's Dragon arrival followed on the success of a May test flight to the station by SpaceXto prove that its privately built space capsules could rendezvous with the orbiting lab and return home safely.

The Hawthorne, Calif.-based SpaceX is one of two companies with a NASA contract for unmanned cargo delivery missions. The other company, Orbital Sciences Corp., of Virginia, has a $1.9 billion contract for eight resupply missions using its new Antares rocket and Cygnus spacecraft. Orbital's first rocket test flight is expected later this year.

SpaceX is also developing a manned version of its Dragon spacecraft. The company is one of four spaceflight firms pursuing private space taxis to serve NASA's need to fly astronauts to and from the International Space Station.

Huge Satellite Fields Around The World