In my dual capacities as a technology entrepreneurship researcher and space fan boy, I've always wanted to see a SpaceX Falcon 9 rocket launch . . . perhaps someday I shall! A couple of years back, my son and I flew to Florida to watch an ISS resupply attempt get scrubbed just an hour before liftoff. With students expecting me back in class, I had to miss the successful launch a few days later. So I was very determined to take advantage of the firm's California launch this weekend.

Thanks to some gracious folks at SpaceX and the U.S. Air Force, Saturday afternoon found me looking at one of the most spectacular views I have ever seen: a majestic rocket with its gleaming titanium dioxide white paint work framed by the magnificent California Central Coast. The Falcon was pointed skyward, ready to power the Jason-3 satellite into a particularly tricky orbit just minutes behind its predecessor, Jason-2. Even the Falcon's unique landing gear, subtly white as well and tucked close to the base of its first stage seemed eager to do their work. I could hardly sleep that night!

Sunday morning I'm huddled with the space nerd media corps in the fog at Vandenberg AFB. Picture us all squinting into the bright haze, looking for a rocket perfectly camouflaged in coastal fog. (Why must they always paint these things titanium dioxide white?) It was a frustrating place to be. No view, no WiFi and cell service so lousy that we couldn't stream the webcast. Despite having theoretically special access to the best viewing, we were reduced to listening to the launch calls on a NASA conference line, like some family from the 1940s gathered around the radio, awaiting news from the frontlines.

3 . . . 2 . . . 1 . . . nothing. No flames, no sound. Just fog. Just silence. If you look up "anti-climatic" in the dictionary, I'm pretty sure you'll find a picture of this moment. We peered into the fog, we looked at each other, commented on Romulan clocking technology, starred at our phones and listened to how things were "nominal" and we experienced nothing but fog. It was the informational equivalent of being in a sensory depravation tank.

Then, WHAM! About 15 seconds later, with the speed of sound proving it really isn't very fast, the Falcon's magnificent ROAR awoke us. Looking up we could briefly see a powerful jet of flame pushing the rocket Southward and upward and away . . . 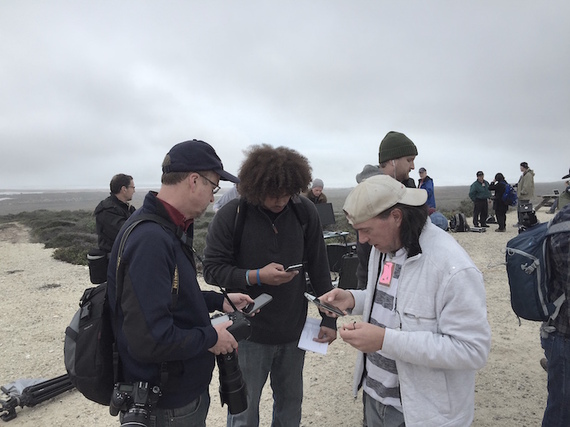 After a few more seconds of peering upward at something that was no longer there, the nerd corps all went back to staring at our phones again. The Jason-3 satellite was safely on its way and we were now eagerly hoping to filter the results of Falcon's first stage landing attempt from mission control's sparse and cryptic verbiage. While we couldn't see the video, we came to understand that the data feed from the landing barge a couple hundred miles off the coast, down toward the Mexican border had been lost just before touch down. Anticlimax squared!

While chowing down on some burgers (I HIGHLY recommend Eddie's Grill in Lompoc) with fellow space fans from outside the gate we got Elon Musk's tweets and discovered that while the landing had been "hard" (the rocket fell over and burst into a ball of flames), the "pieces were bigger this time!" Later information revealed that a landing leg failed to stick, probably due to ice collected during the flight. Not a bad effort at all actually given the challenges of the task, the cold, wet air and the seriously rough seas.

Just imagine guiding a huge rocket back from the edge space that had been traveling many times the speed of sound and landing it on an unmanned boat heaving in 12 foot swells hundreds of miles off shore. If you'd told me three years ago Musk could even hit the boat, I'd have been politely dubious. But SpaceX has at least hit the mark every time they've tried, including last month's perfect touchdown on land. They're gonna get this process down and (for reasons I'll explain in a future post), that is going to shake the space industry to its foundations and change the future of mankind (I kid you not). 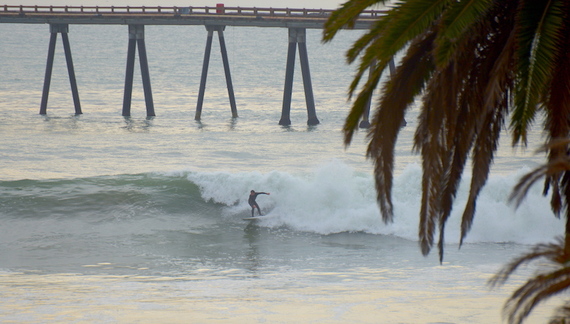 Finally, we get back in the electric car (sadly, not a Tesla) with the plate reading "NU SPACE" and drive 170 miles back to LA. Along the way we pass the time by gazing longingly at the awesome surf at Rincon (should've brought boards) and at the beautiful snowpack the SoCal mountains are sporting (could've been snowboarding). Still it was an awesome day with the New Space community and I wouldn't have traded it for anything. I haven't actually seen the future, but I know it works.