CAPE CANAVERAL, Fla. — Scotty has finally been beamed up. The ashes of the actor James Doohan, who played Scotty on the 1960s television series "Star Trek," were launched to space this morning (May 22) on a SpaceX Falcon 9 rocket.

The unmanned Falcon 9 blasted off at 3:44 a.m. EDT (0744 GMT) from here at the Cape Canaveral Air Force Station, carrying the Dragon capsule filled with cargo bound for the International Space Station. Also packed aboard the rocket was a secondary payload carrying remains from 308 people, including Doohan and Mercury program astronaut Gordon Cooper, according to ABC News and Reuters.

The ashes were flown under an agreement between the spacecraft's builder, private rocket company SpaceX (Space Exploration Technologies Corp. of Hawthorne, Calif.) and Celestis, a company that books memorial spaceflights to "launch a symbolic portion of your loved one's ashes into space," according to its website.

"We had a Celestis canister on the second stage, not on Dragon," SpaceX president Gwynne Shotwell said at a news conference after the launch. "They've actually been a customer of ours since 2005 or 2006." 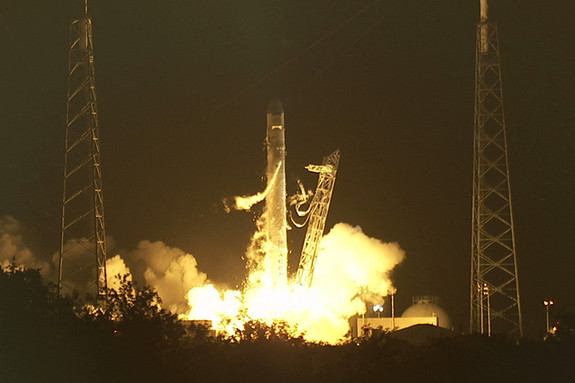 The Falcon 9 rocket and Dragon spacecraft launch from Space Launch Complex 40 at the Cape Canaveral Air Force Station in Florida on May 22, 2012.

The Falcon 9 rocket's second stage separated from the capsule nine minutes and 49 seconds into the flight, and is now orbiting on its own above Earth. The second stage will likely stay in orbit for about a year before it falls back toward the ground and is burned up during re-entry. [Photos: SpaceX's Dragon Launches to Space Station]

In addition to the human ashes, SpaceX's Falcon 9/Dragon flight launched about 1,014 pounds (460 kilograms) of cargo for the space station, including food and supplies for the crew, student-designed science experiments, computer equipment and commemorative souvenirs like mission patches and pins.

Celestis charges $2,995 to launch 1 gram of a person's ashes to Earth orbit. Deep space launches to the solar system start at $12,500, while suborbital flights that return to Earth begin at $995.

The human remains payload was not officially announced by SpaceX before today, although news reports publicized the inclusion of the ashes onboard Falcon 9.

"So much for our 'secret' launch," Charles Chafer, CEO of Celestis' parent company, Space Services Inc., wrote on his Facebook page Sunday (May 20). However, the payload was apparently secret enough to fool SpaceX founder and chief designer Elon Musk.

"If they were onboard I didn't actually know that," Musk said after the liftoff. "I was focused on other things."

SpaceX's Falcon 9 rocket launches the unmanned Dragon capsule into orbit on May 22, 2012.

This isn't the first launch for Celestis.

Ashes from "Star Trek" creator Gene Roddenberry and his wife Majel Barrett Roddenberry, as well as many others, have been booked on flights by Celestis. The ashes are packed into special capsules and added as payloads on orbital and suborbital rockets.

In fact, the company tried to launch Doohan and Cooper's ashes on an earlier SpaceX flight, but the smaller Falcon 1 rocket carrying them in August 2008 failed to reach space. The company is trying again now as part of its guarantee to send another sample of a person's ashes if a rocket fails to launch the first time.

Today's SpaceX flight was the company's "largest launch event ever," according to Chafer's Facebook page.

Dragon launched Tuesday after an earlier attempt at liftoff was called off at the last second due to an engine valve problem. The issue was fixed and the vehicle had a smooth blastoff into the predawn skies here on the second try.

The Dragon capsule will become the first private spacecraft to rendezvous and berth at the International Space Station when it arrives at the orbiting lab later this week. The mission is the final test flight for SpaceX under NASA's COTS program (Commercial Orbital Transportation Services), which has funded the development of private vehicles capable of delivering cargo to the orbiting laboratory.