If you're tired of the nightly local "eyewitness news" and would like to see more stories about UFOs and the search for aliens, try "Spacing Out."

No, it's not a state of mind. Rather, it's a weekly webseries that presents the latest otherworldly news on UFOs and the search for extraterrestrial intelligence in a format similar to a traditional news broadcast. But instad of 30 minutes of news, sports highlights and the weather, "Spacing Out" is all about the general mysteries of the universe.

Produced by OpenMinds.tv, "Spacing Out" debuted on May 4 and is co-hosted by Jason McClellan and Maureen Elsberry, who offer a fresh take on how UFOs and related topics are presented to the public.

The hook of the show features interviews with top researchers, journalists, media personalities and scientists -- whether it's photographic and video analysts in the UFO field or people who are scientifically searching for ET.

"We structure it in an eyewitness news format to give more of an objective view of all the subjects," Elsberry told The Huffington Post. "This keeps it more easily digestible for both the general public and not just hard-core enthusiasts. In a news format, you're able to objectively present facts and then let viewers formulate their own opinions."

McClellan and Elsberry cram a lot of information into each episode. The June 29 installment focuses on UFOs reportedly seen during China’s recent spacecraft launch; an update on the ongoing investigation of the mysterious object sitting on the floor of the Baltic Sea; a video submitted by a viewer who captured something odd in the sky over upstate New York; future vacations to the moon; and the impact on religion when ET life is discovered.

"We're delivering news related to UFOs and extraterrestrials because there's so much space news always in the headlines," McClellan told HuffPost. "We separate those topics on the show -- through UFO news and space news segments -- even though they're possibly related."

Don't be misled by the visuals accompanying the opening credits of each episode. The cheesy, funny, "B" movie shots from bad 1950s sci-fi films (see below) are nicely juxtaposed with the actual content of the show, which does an excellent job of keeping viewers informed of strange goings on in the skies around Earth. 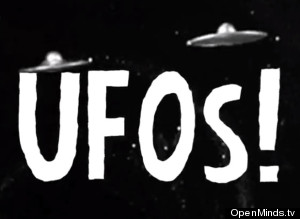 While McClellan and Elsberry aren't scientists, they come off as extremely interested in the subjects they report on and they bring up the kinds of questions that would likely be asked by many viewers.

"Maureen and I aren't experts -- we're reporting the news and providing this content to people. We encourage people to share if they have an experience or a great video or just feedback about the show," McClellan added.

"'Spacing Out' is all about keeping people up to date on everything going on in the world of UFO sightings, news and space exploration," Elsberry said. "One important aspect of the show is audience participation. We take submissions from people, whether it's comments on current news stories and UFO sighting submissions. By doing this, we're making it a global project so that we can learn more about the subject on a global level."

McClellan cautions about believing everything you read in UFO polls. "In a lot of these polls, many of the questions contradict each other," he said. "The question that annoys me the most asks: Do you believe in UFOs or do you think UFOs are real? That's not a question. UFOs are real.

"The appropriate question should be: Do you think some UFOs are extraterrestrial in origin? That's a real question worth asking."

New episodes of "Spacing Out" air on Fridays at OpenMinds.tv/spacingout, but you can view them pretty much whenever you want.