MADRID, Dec 20 (Reuters) - The People's Party (PP) of Prime Minister Mariano Rajoy won Spain's general election on Sunday, exit polls showed, although it will have to rely on other parties if it is to govern for another four-year term.

That points to a stalemate that analysts agree would probably disrupt an economic reform program that has helped pull Spain - the fifth-largest economy in the 28-nation EU - out of recession and eroded a still sky-high unemployment rate.

The opposition Socialists are seen coming second with 79 to 85 seats while newcomer parties anti-austerity Podemos and liberal Ciudadanos would come third and fourth respectively.

Podemos would garner between 70 and 80 seats and Ciudadanos would win between 46 and 50 seats, the exit polls showed.

If confirmed, such results would give way to coalition-building talks that could go over many weeks as no easy pact appears in reach. The Spanish constitution does not set a specific deadline to form a government after the election.

Many potential outcomes are possible, including a center-right pact between the PP and Ciudadanos, a center-left alliance between the Socialists and Podemos, a minority administration or fresh elections.

Rajoy said on Wednesday he would consider a cross-party pact to ensure a stable administration over the next four years, but all the other main parties have come out against joining the PP in a coalition.

Ciudadanos and Podemos insiders say both parties are looking beyond Sunday's vote and aim to keep poaching voters from the PP and the Socialists, giving them no incentive to agree on a pact unless they win major concessions. 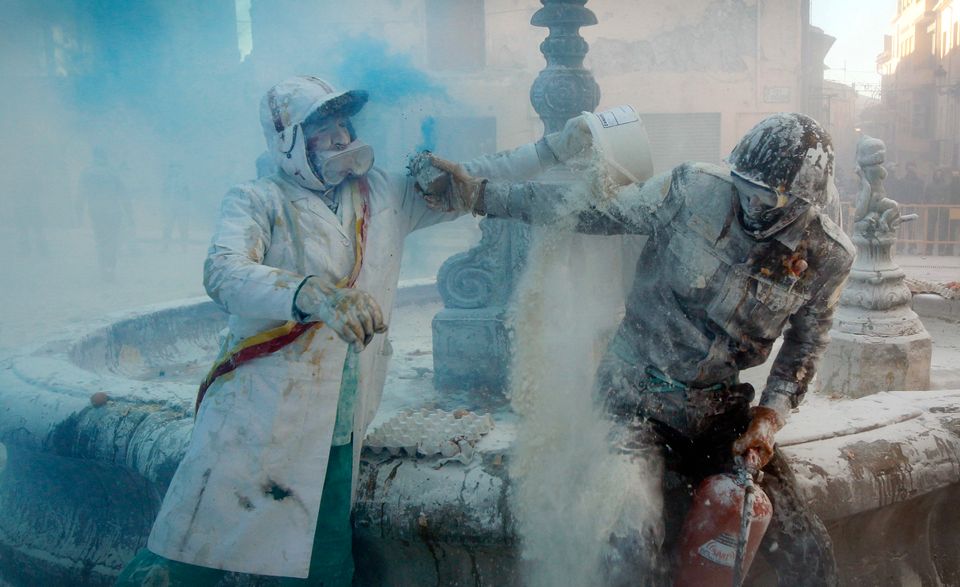 1 / 27
Revelers take part in festival of Els Enfarinats, in the town of Ibi near Alicante, Spain, Friday, Dec. 28, 2012. For 200 years the inhabitants of Ibi annually celebrate with a battle using flour, eggs and firecrackers, outside the city town hall. (AP Photo/Alberto Saiz)
AP