By Paul Day and Tomás Cobos

MADRID, Feb 19 (Reuters) - Hundreds of thousands of people protested across Spain on Sunday against reforms to the labour market they fear will destroy workers' rights and spending cuts they say are destroying the welfare state.

Organisers, including the two largest unions Comisiones Obreras and UGT, said as many as half a million people joined the protest in 57 towns and cities, although Spanish police gave no official estimate.

In Madrid, one of the largest protests since the economic crisis began almost five years ago filled the wide boulevards from the Atocha train station up to the central Sol square with loud but peaceful marchers of all ages.

"Contracts are getting worse every year. They say they want to invest in the future while cutting research budgets. They're not looking to the future but to the next election with cuts dictated from Brussels," university researcher Nacho Foche, 27, said.

Spain's new conservative government began its four-year term in December with tax hikes and spending cuts worth around 15 billion euros ($19.74 billion) and must cut another around 40 billion to meet tough deficit targets set by the EU.

It has also passed reforms in the financial sector, which force banks to recognise property sector losses, and the labour market, which grant companies greater hiring and firing power, in an effort to appease nervous markets.

The euro zone's fourth largest economy has been in the eye of storm of the debt crisis since the Socialist government racked up one of the bloc's largest budget deficits, leaving investors concerned it had lost control of its finances.

The Socialists, trounced in November's election over their perceived mishandling of the crisis, made sweeping cuts and reforms while the economy reeled from the fallout of a burst property bubble and collapsed domestic demand.

The conservative party says its own labour market reform, passed Feb. 10, will give struggling companies more room to recover from the economic crisis and create jobs in a country where almost half of all young people are unemployed.

The reform has abolished severance pay worth 45 days for each year worked, a legal requirement that companies said made it prohibitively expensive to reduce the workforce in times of economic difficulties.

"When we designed this reform we were thinking in the people who are out of work, who see no future," Prime Minister Mariano Rajoy told a party conference on Sunday.

Spain has the highest unemployment rate in the developed world at 23 percent and many Spaniards fear granting businesses greater powers to lay off workers will prompt a wave of redundancies and new contracts without rights.

Rajoy was caught on camera in Brussels last month saying to his Finnish counterpart that he believed the labour reform would cause a general strike and, although the unions have not called for industrial action, many at the march in Madrid thought more should be done.

"There has to be a general strike. They said they were cutting workers rights to create more work. They've cut rights, but not said how they plan to create jobs," teacher Alberto Carrillo, 48, said.

"Before we were privileged, but now we're having trouble even paying our gas bills." ($1 = 0.7597 euros) (Additional reporting by Inmaculada Sanz; Editing by Alison Williams) 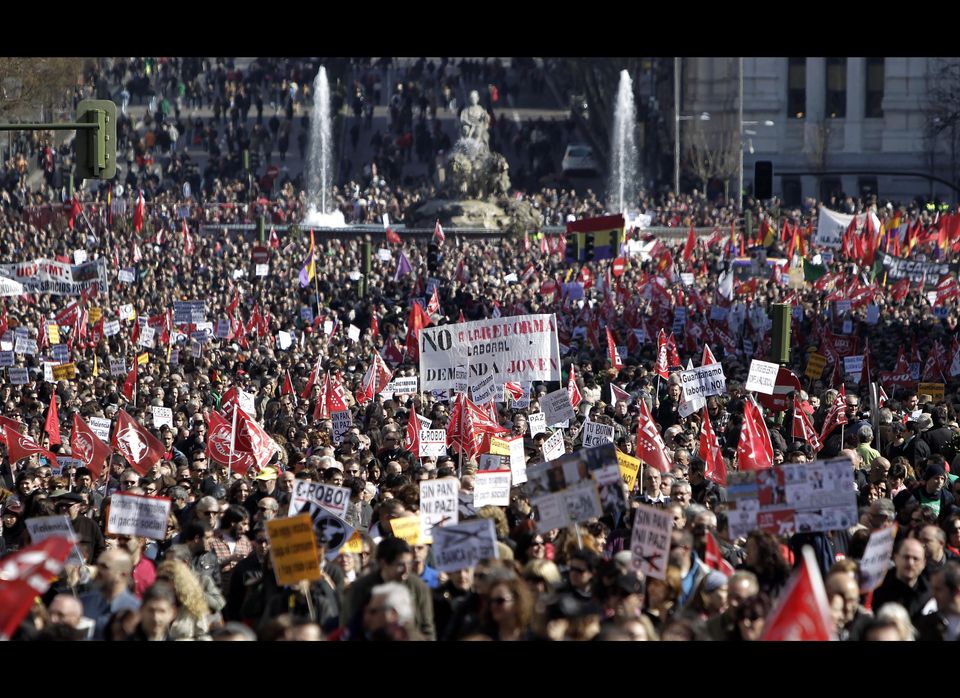