MADRID, Spain -- The ballots have wiped clean Podemos leader Pablo Iglesias's smile. The polls, leading up to the general elections on June 26, gave him dreams of an overwhelming victory -- but this summer's dream did not materialize. He could have governed with the PSOE after the December 20 elections, but he felt invincible, and decided to bet on the new elections. He lost.

It could be that the social-democrat suit that he had custom-made was not convincing to his supporters. He definitely did not win over those loyal to Izquierda Unida (Left United), who did not feel represented by the Unidos Podemos alliance. His success in Catalonia and the Basque Country -- where he won first place in votes and seats -- was not enough. People who voted for Prime Minister Mariano Rajoy's conservative People's Party (PP) even stole their slogan on election night: "Yes we can!" they cheered at the top of their lungs when Rajoy appeared on the balcony on Genova Street.

The PP's victory on June 26 -- it gained 14 more seats and 600,000 more votes -- is a very personal victory for Mariano Rajoy. He has taken down all his rivals with one strike: He has left the PSOE trembling and Podemos in ruins. He has also burst the Ciudadanos bubble by taking back the popular vote that had been handed to the youthful party.

For this electoral campaign, Rajoy stepped out of the TV screen, and traipsed through urban and rural Spain. He appeared on all the television shows he had previously mocked, and polarized the constituency.

There will be time to investigate if Brexit, and the resulting uncertainty over the future of Europe, has influenced voters who had been undecided until the last minute.

The wave of arrests and revelations surrounding political corruption scandals that had hit his party over the past six months have not deterred his voters. In fact, in Catalonia, the PP has obtained one more seat than in December, with Jorge Fernandez Diaz coming out as number one. 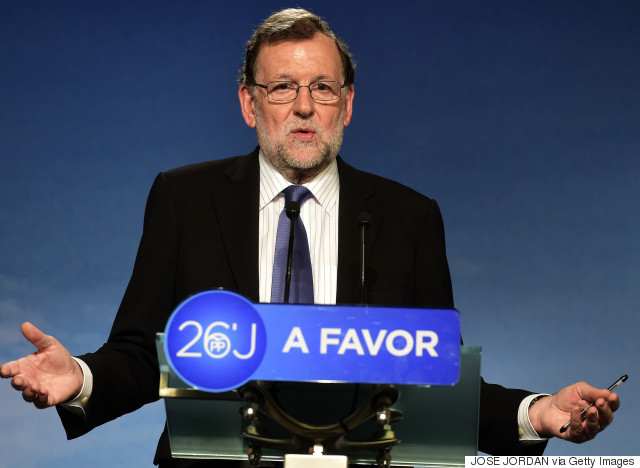 Mariano Rajoy's PP had much to celebrate on Sunday night. The conservative party added to its support base but still remains short of a majority government. It will be seeking a coalition partner once again.

There will be time to investigate if Brexit, and the resulting uncertainty over the future of Europe, has influenced voters who had been undecided until the last minute. And there will be time for polling companies to evaluate their resounding failure in detecting the voting trends of the Spanish population. The disparity between the polls and the actual results imply that we either lie like Cossacks, or that there's something wrong with the thermometer.

Despite the forecasts, the PSOE was able to maintain its strong position on the left, even though five seats and 127,000 votes were lost in the process. The voters have not rewarded its effort to reach a governing agreement after the December elections, but they have also not abandoned the party en masse for the sake of Podemos. While the leadership of Pedro Sanchez is still in question, he will remain in charge.

Susana Diaz, Secretary-General of the Andalusian branch of PSOE, had her hopes of taking power in Andalucia slashed by the PP's victory. The PP was not only successful in the south: its victories spread to all other regions, except for Catalonia and the Basque Country.

Albert Rivera's centrist Ciudadanos was hit the hardest by the low voter turnout -- which was 68 percent compared to 73 percent during December's elections -- and by the electoral law. With 32 seats, eight fewer than in December, the center has been weakened, although it will continue to play a key role with the formation of the next government.

In Europe, the administrators of austerity have generally failed. The PP is an exception.

The big question now is: In light of these results, what would a new government look like? The success of the PP renders a leftist alternative very complicated. The PP had 33 more seats than the PSOE before these elections, and now the difference has increased to 52. Mathematically, a leftist government with 156 representatives is still possible, if it gathers together the rest of the political spectrum, except for the Popular Party. But now, it's all in Rajoy's hands, and this time, he will not say 'no' to the head of state.

Rivera will sell his support at a high price, and the PSOE will have to decide if it will enter into a coalition government -- Rajoy's favorite, albeit unlikely, formula. Alternatively, it could stand aside and let him govern, or make another attempt for an agreement with Iglesias (an even more unlikely scenario).

Four years and six months later, the Popular Party's performance is astounding. In Europe, the administrators of austerity have generally failed. The PP is an exception. Rajoy has convinced nearly eight million Spaniards that under his leadership, employment and prosperity will return. The campaign based on fear of change and adventure has won.