The siesta is a time-honored cultural tradition in Spain -- one that may soon be taking its place in the history books.

The tradition of taking a three-hour nap in the middle of the day dates back thousands of years, when breaks let agricultural workers avoid being outside when the sun was at its hottest.

But now that most people commute to an office rather than a field, Spanish Prime Minister Marino Rajoy hopes to get the country's workers up to speed with the rest of Europe, The Independent reported. Rajoy announced over the weekend that he wants to end the siesta tradition, which he believes would boost productivity and modernize the workforce.

The current Spanish workday starts around 10 a.m. Workers break for three hours in the early afternoon and end their day around 8 p.m. If the new proposal goes into effect, the Spanish will adopt a more conventional workday that doesn't have a siesta break and that ends around 6 p.m.

A parliamentary commission suggested something similar in 2013, according to The Telegraph. "We need more flexible working hours, to cut our lunch breaks, to streamline business meetings by setting time limits for them, and to practice and demand punctuality," the commission determined.

Reports of low national productivity helped inspire the prime minister's decision, but will getting rid of the siesta help?

Sleep medicine expert Dr. Michael Breus, for one, is doubtful that the change will boost productivity.

"Many people in Spain seem to get about five hours at night and then two to three during the day," Breus told The Huffington Post. "I doubt they will increase their sleep at night, I think they will simply lose total sleep time, which will make them less productive."

Here's what the science has to say about naps, workday breaks and productivity.

The science is unequivocal: Naps give your brain a major boost and make you more productive. Midday naps significantly boost the brain's learning capacity, and our brains become more sluggish the longer we stay awake, suggests a 2010 study from the University of California, Berkeley.

For the research, one group of participants took a 90-minute siesta at 2 p.m., while the other group stayed awake. At 6 p.m. that day -- when Spanish workers would be reaching the end of their workday -- the participants performed a series of learning exercises similar to those that they had performed earlier. Those who napped performed significantly better, while those who stayed awake did worse.

"Sleep not only rights the wrong of prolonged wakefulness but, at a neurocognitive level, it moves you beyond where you were before you took a nap," Dr. Matthew Walker, a psychologist at the university and the study's lead author, said in a statement.

Other research has found that napping can help reverse the effects of sleep deprivation, which costs American companies an estimated $63 billion annually in lost productivity.

For those of us who can't go home in the middle of the day for a siesta, there is a solution: Offices can add more nap rooms instead of denying workers the time to take a nap.

The siesta in Spain is three hours long, but the country's proposed workday would be only two hours shorter than it is now. So, under the new plan, Spanish workers would be in the office an extra hour each day.

Longer hours don't result in higher levels of output. In fact, science shows just the opposite: They result in burnout and reduced productivity. One study even suggests that labor output per hour can fall when people work for long periods of time.

Other research has shown that shorter working hours correlate with greater productivity. (And here's an added perk: A shorter workday could even mitigate climate change by reducing greenhouse gas emissions and curbing excess consumption!)

3. Breaks are essential to productivity.

Our brains weren't built to function for a full eight hours every day. Many neuroscientists agree that our mental resources are finite and need to be replenished after a certain period of intense focus or energy expenditure.

Most people can't sustain intense energy and focus on the task at hand for more than roughly four hours -- so it makes sense to take a longer break around the four-hour mark.

"The best way to refresh your focus is to step away and take a break," productivity expert Cathy Sexton told Fast Company.

Pausing to disconnect from work email, spend time with loved ones and rest -- as the Spanish currently do during their siesta period -- can help refresh the mind so that workers return to their desks energized for the late afternoon and evening. 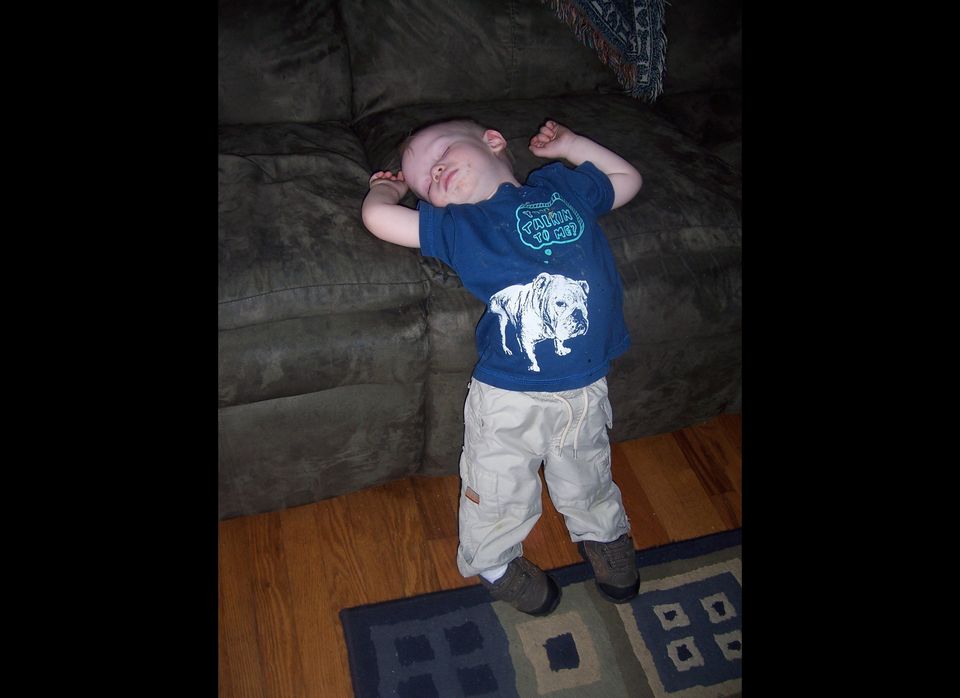 1 / 13
Vertical Napping
This napping genius doesn't even need to lie down in order to refresh himself. Which is going to serve him really well if he can still do it when he's grown up. And judging by the ring around his mouth, he may have also eaten something while taking this standing nap, although that has not been confirmed by the source. Forget the Nap Olympics, that would qualify him for "Ripley's Believe it or Not".
Courtesy of Naps Happen