(AP) BRUSSELS - Anti-austerity protests erupted across Europe on Wednesday -- Greek doctors and railway employees walked out, Spanish workers shut down trains and buses, and one man even blocked the Irish parliament with a cement truck to decry the country's enormous bank bailouts.

Tens of thousands of demonstrators marched through the streets of Brussels toward European Union buildings in bright red, green and blue labor union jackets, aiming to reinforce the impact of Spain's first nationwide strike in eight years.

Strikes or protests were also taking place Wednesday in Greece, Portugal, Ireland, Slovenia and Lithuania, all aimed at the budget-slashing, tax-hiking, pension-cutting austerity plans that European governments have implemented to try to control their debt.

The march in Brussels was taking place just as the EU Commission proposed new penalties to punish member states that have run up deficits, mainly to fund social programs in a time of high unemployment. The proposal, backed by Germany, is running into strong opposition from France, which wants politicians to decide on sanctions, not rigid rules alone.

"It is a bizarre time for the European Commission to be proposing a regime of punishment," John Monks, general secretary of the European Trade Union Confederation, told Associated Press Television News. "How is that going to make the situation better? It is going to make it worse."

PHOTOS OF THE PROTESTS:

Unions fear that workers will become the biggest victims of an economic crisis set off by bankers and traders, many of whom were rescued by massive government intervention.

"It is not right that people on low salaries have to pay to prop up the country. It should be the banks," said Belgian demonstrator Evelain Foncis.

Several governments, already living dangerously with high debt, were pushed to the brink of financial collapse and have been forced to impose punishing cuts in wages, pensions and employment -- measures that have brought workers out by the tens of thousands over the past months.

"There is a great danger that the workers are going to be paying the price for the reckless speculation that took place in financial markets," Monks said. "You really got to reschedule these debts so that they are not a huge burden on the next few years and cause Europe to plunge down into recession."

In Spain, Prime Minister Jose Luis Rodriguez Zapatero's Socialist government is under severe pressure because of unpopular measures put in place to save Europe's fourth-largest economy from a bailout like one that saved Greece from bankruptcy.

The cuts have helped Spain trim its central government deficit by half through July but the unemployment rate stands at 20 percent, and many businesses are struggling to survive.

The strike Wednesday was Spain's first general strike since 2002 and marked a break in the once-close relationship between unions and the Socialist government.

Greece, which had to be rescued this spring by the 15 other nations that share the euro currency just to stave off bankruptcy, has also been forced to cut deep into workers' allowances, with weeks of bitter strikes and actions as a result.

Greek bus and trolley drivers walked off the job for several hours while Athens' metro system and tram shut down. National railway workers also walked off the job, disrupting rail connections across the country, while doctors at state hospitals were on a 24-hour strike.

Greece has already been suffering from two weeks of protests by truck drivers who have made it difficult for businesses to get supplies. Many supermarkets are seeing shortages, while producers complaining they are unable to export their goods.

In Dublin, a man blocked the gates of the Irish parliament with a cement truck to protest the country's expensive bank bailout. Written across the truck's barrel in red letters were the words: "Toxic Bank" Anglo and "All politicians should be sacked."

Police arrested a 41-year-old man but gave few other details.

The Anglo Irish Bank, which was nationalized last year to save it from collapse, owes some euro72 billion ($97 billion) to depositors worldwide, leaving Irish taxpayers with a mammoth bill at a time when people are suffering through high unemployment, tax hikes and heavy budget cuts.

Also Wednesday, some 400 protesters rallied in an illegal demonstration in Vilnius to demand authorities in Lithuania cease harsh austerity measures such as salary cuts.

"All of working Europe is on the streets today to express dismay over nearsighted income-cutting politics," said Vytautas Jusys, a 40-year-old engineer who lost his job this year.

In Slovenia, thousands of public service workers continued their open-ended strike on Wednesday to protest the government's plan to freeze their salaries for two years -- or until economy grows again at a rate of 3 percent.

Unions in Portugal expect some 30,000 people to show up for demonstrations. 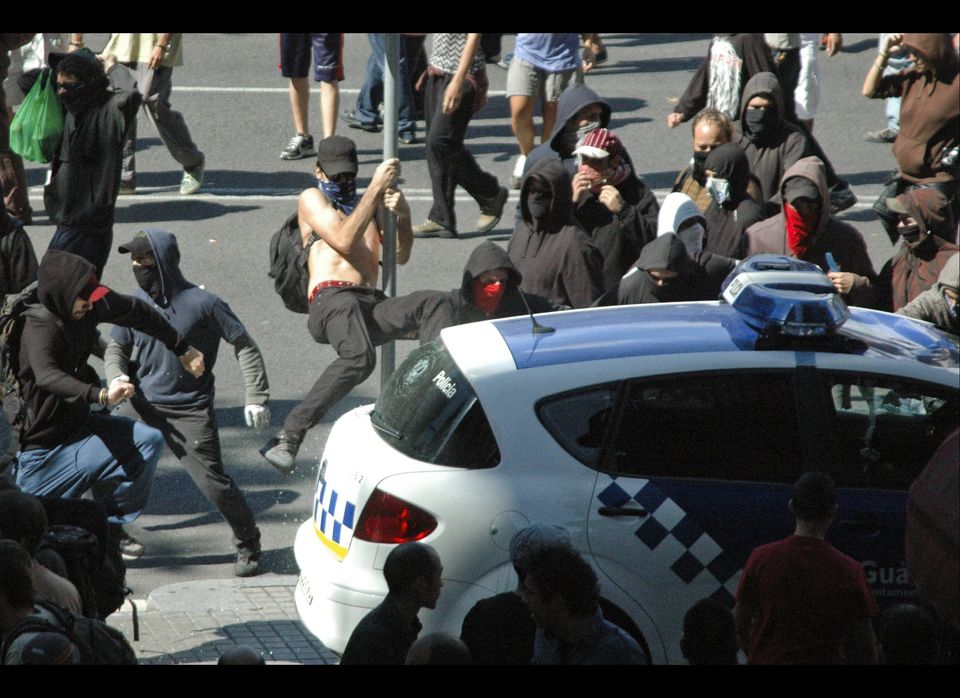