Two years ago, as we started thinking about the idea of Podemos, one thing was clear: we had to transform political resistance into political change, and that change necessarily involved burying the two-party system, and paving the way for a new era in which the social struggles of those in the lower classes are represented by our institutions. This has been achieved in part through the electoral cycle that yesterday's elections sealed off-- but that change had started to unfold much earlier.

Since 15M, we knew that nothing would ever be the same, no matter what the official discourse maintained. Elections are usually a good example of the distance between reality and fiction. On election night, almost all political parties find ways to claim victory or to claim they've witnessed positive election results. But, beyond communication strategies, this historic election leaves us with a definite loser and a major winner. On one side stands the defeated bipartisanship, the axis of Spanish politics. On the other, there is the emergence of Podemos and the forces of change, and the confirmation of their importance.

Last night, when Mariano Rajoy thanked his followers for the election results, he neglected to admit the most painful truth: Spaniards, the two-party system is dead. Behind his comments about "instability" hides the end of the two-party system, of political alternation, of a mode of representation and management that has been key in the stability and governance of Spain, but that has not been beneficial to society. Rather, it has helped a regime (the Regime of 78), which turned its back and betrayed majorities for more than 30 years. Just four years ago, the two main parties won 73.35 percent of the votes. Today, they are left with only 50 percent.

"This plurality of actors is what increases the diversity and wealth of politics."

At Podemos, we've always known that political change --reflected once more by these elections-- is inexplicable without the help of a series of popular protests, which started with 15M and the citizens' tide demonstrations that denounced austerity, fiscal cuts, the crisis, and demanded a "real democracy" capable of challenging the consensus of the Regime of 78. Therefore, I think it wouldn't be honest to attribute our success solely to a party that has turned around the political chessboard. Success was brought about by the real movement that has repealed the existing order, the movement that built the base for political mobilization and for the collective sense of discontent with the austericide and public tax cuts that were imposed in Europe. 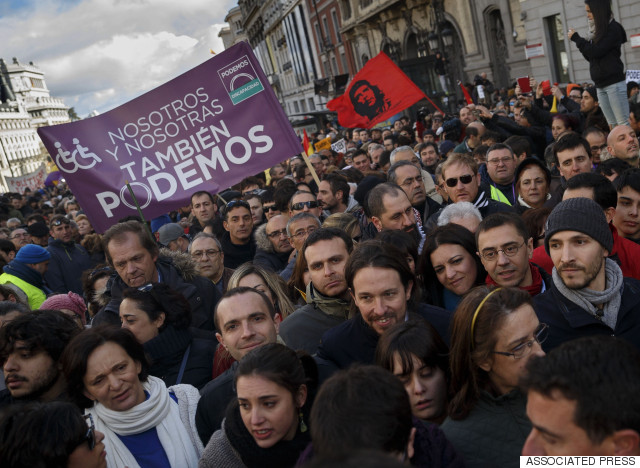 Pablo Iglesias, leader of Podemos, smiles as he marches to give a speech in Madrid's main square on Saturday, Jan. 31, 2015. It seems that in this campaign, the yearnings for change of so many thousands of people that have taken to the streets year after a year, or were angered by governments or unjust policies, were heard. They are the ones, an "army of Pancho Villa," --a popular movement so diverse and heterogenic-- they are the ones that led a rupture that first materialized in the squares, and that finally materialized in parliament.

Philosopher and activist Daniel Bensaid used to say that emancipation couldn't be a solitary pleasure: emancipation is collective. The popular movements that have given form to this political change exemplified precisely that. The first round took place in May in the principal cities of the nation, where the two parties were substituted for popular candidates governed by unity. Last night marked the second round, and this time the two-party system was blown to smithereens.

"Change can't be limited to "politics." Rather, politics must serve to change people's lives."

This 20D shows a fragmented parliament, yes, but, above all, these elections are an expression of the electoral opportunity for Podemos and an array of other political movements (EnComun/Podem, Mareas, Compromis/Podem). This plurality of actors is what increases the diversity and wealth of politics; and it's also what will surely increase its complexity, promoting pacts and accords between these forces of change.

The fracture of the two-party system confirmed by the 20D results, the process of sovereignty in Catalonia, amending Article 135 of the Constitution, and a cycle of exceptional social mobilizations-- all of this has placed on the table the necessity (barely discussed nowadays) of going beyond the constitutional frame built during the transition. However, what's at issue is whether the new agreement will be an exercise of reform and regeneration between elites, a cosmetic change, or whether, on the contrary, the citizenship will be able to play a major role in the reformation of the constitution, one where they can make decisions about everything and where the popular classes can really express their desires for change. In this sense, many of us will defend an agreement between those in the lower classes so as to avoid a process that is restricted only to those at the top.

Change can't be limited to "politics." Rather, politics must serve to change people's lives, to combat and put an end to exploitation, economic and private property structures, precariousness, violence against women, environmental problems... In other words, political change is just the starting point, a window of opportunity to put these subjects on the table and to promote the kind of change that translates into an authentic social revolution.

To sum up, these elections have opened the doors to a new political era with an uncertain future. We'll walk down an exciting road in which we'll have to figure out whether we'll have a second transition or the first democratic rupture.

Podemos was created not only to win, but also to be a tool for those in the lower classes. We find ourselves with a double responsibility: on the one hand, not to fall to conformism, and, on the other, to dare to explore the uncertain contours of the future. Yes, interesting times are upon us.

This piece was originally published on HuffPost Spain and was translated into English.

Deputy of Podemos, and member of European Parliament