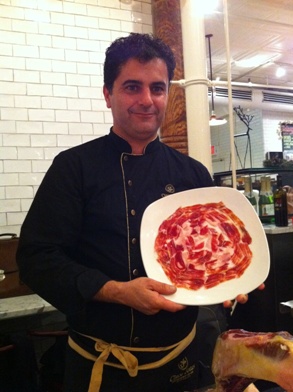 No, that's not a typo and not meant to be $1.50/lb. It is $150 a pound and that's for the shoulder of a very special pig. Its back legs are more: $180 a pound, and they will be available in select areas in the U.S. on Monday. Mustard would be a sacrilege. After all, this is "5J 100% Pure Breed Ibérico de Bellota" ham from Spain.

The back story: More than 20 years ago, I had one of those taste epiphanies, the Proustian kind, where, embedded in your brain is a memory, an aroma, a texture and a story. One that is released upon even a near encounter with that said memory. I was in Barcelona, sitting with my husband and business partner, at a dank wine bar, slipping short, translucent, wafers of cured pork into our mouths and letting them gently rest upon our tongues until they melted away -- not unlike the experience of transcendental sashimi. "What is this?," we asked in our best Catalan, and the answer was simply "Jabugo." Not like anything else we've had, but reminiscent of the experience of sampling a superlative prosciutto or culatello, I always thought Jabugo was the word for ham. That is, until last night.

Jabugo, in fact, is a place -- a town in the southwest of Spain, near Portugal, where the world's most prized 100% pure-bred pigs are raised. These pigs eat acorns, not the shells mind you, but only the "fruit" within, occasionally munch on some verdant grass, and have 5 acres each upon which to saunter and socialize. They know that they are special because their parents were pure bred and so are they. These pigs remain slender and strong, and their ankles look a lot like my mother's, who wore a quad-A shoe with a quintuple heel. Imagine. Thin indeed, and one of the many sublime qualities that define their uniqueness. Twenty years ago I sampled the prized pork when we were working on developing a hotel in Barcelona, called Hotel Arts, that was meant to open in time for the Olympics in 1992. Along with über-designer Adam Tihany we created a tapas bar and other dining facilities. Along with the taste of Jabugo on that trip we sampled green olives the size of golf balls and drank orange juice in wine glasses, served with a spoon, for dessert.

Twenty years later, I found myself remembering that mesmerizing taste, porky perfume, and texture of Jabugo at a small tasting last night at Despaña. (Despaña is a fabulous food store in Soho specializing in the best products of Spain.) The secret of this particular ham is in the fat, which is alluring sweet and ethereal. The fat of the pure breed Ibérico de Bellota pig gets infiltrated between its muscles. The flesh is dark red and unlike its porcine cousins, it is cut by a professional cortadores into short, thin, translucent slices: Another unique quality of the product. Last night we had our very own cortador whose name is Paco (photo), who cut translucent slices, discerning the correct ratio of fat and meat, from different areas of the leg, each with its own perfume and texture. Recently Paco spent time with Ferran Adrià who is considered one of the world's best chefs. Adrià hails from San Sebastián, Spain where in his revered (and now sadly closed) El Bulli he melted, or rendered, the prized fat of the Iberian pig to use it as "olive oil." (I have some of this fat in my fridge and am considering scrambling some eggs in it in any moment.) These amazing hams, made with only three ingredients -- the shoulder or legs of the Ibérico pig, salt, and the climate of the region, take two to three years to cure. Under the supervision of a "maestro jamonero" (master ham craftsmen), the "air" is manipulated simply by the opening or closing of glass panes.

The pig is bred for one purpose only: To be served at room temperature (so that the fat glistens) before a meal, like caviar or pâté de foie gras, accompanied only by dry sherry (a fino or amontillado) or a Spanish red wine, and perhaps a crust of bread. Why mess with perfection?

Download
Calling all HuffPost superfans!
Sign up for membership to become a founding member and help shape HuffPost's next chapter
Join HuffPost
Follow Rozanne Gold on Twitter: www.twitter.com/RozanneGold
Voting Made Easy
Register to vote and apply for an absentee ballot today
Register now