Friends outside of Spain have been asking me about the ongoing movement that has become known as #spanishrevolution. Here's the summary of what this movement is about:

People have become increasingly frustrated by the many problems in Spain: Over 20% unemployment rate and over 30% youth unemployment rate, incompetent politicians unable to deal with the effects of the crisis, extremely high housing prices both for rental and purchase, a mortgage system that ties mortgage holders for life to the bank if the real estate is sold for under the loan amount, and a general discontent with the status of the political landscape (especially the effective two-party system of the center-right People's Party and the center-left Spanish Socialist Workers' Party).

The #spanishrevoution is an internet movement that was started by leading figures on the internet, including top bloggers and internet entrepreneurs, to harness the distress of the Spanish people into action ahead of this past weekend's elections. The most active supporters of the movement have moved from the internet to the streets to gather in camps at key locations of many Spanish cities, like the Plaza del Sol in Madrid, where they discuss the changes they want to bring about and are planning to stay for the time being. Each camp is autonomous, there is no central organ coordinating the movement and many sleep in public squares in protest. 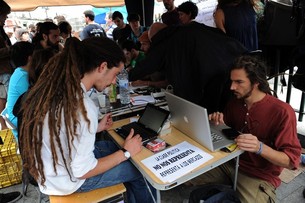 The #spanishrevolution did not start as a unified movement, but is rather the result of an informal merger between different movements with similar, but not equal, goals. There seems to be broad consensus that the protests on May 15th (aka the 15M movement) organized by Democracia Real Ya (DRY) were the spark that ignited #spanishrevolution. The tagline of Democracia Real Ya is: we are people, not commodities in the hands of politicians and bankers (in Spanish: "no somos mercancía en manos de políticos y banqueros"). You can read the manifesto of that movement in English here. The protests were a huge success: more than 80,000 people all over Spain took to the streets to protest against citizens being left behind during the crisis and against corruption.

DRY proposed to follow the lead of two role models; Iceland and the Arab revolts. In Iceland, citizens were able to make use of democratic powers to put some of the persons responsible for the crisis behind bars and to initiate important constitutional reforms. What DRY wanted to leverage from the Arab revolts was the incredible catalytic effect provided by the social networks, the mobile networks and internet in general.

Some of the most important figures/initiators of the 15M movement are Fabio Gándara (who has been part of the movement since the beginning), Jon Aguirre Such (DRY's spokesperson) and Olmo Gálvez (whom El País calls a social networking "crack"). It's interesting to point out that all three of them are quite young, between 26 and 30, and didn't know each other until shortly before 15M. The people who have joined #spanishrevolution, however, are very heterogeneous, covering all age ranges, professions and social classes.

After the May 15th protests, a small group of participants decided to camp out at the Puerta del Sol in Madrid (known as #acamapadasol). More and more people joined #acampadasol, and eventually the "acampadas" spread out to other cities all over the country on the 18th, fueled by a surge of outrage that spread like wildfire after police removed the peaceful protestors from Plaza del Sol. By that time, #spanishrevolution had already been born. While there are no exact numbers, it is safe to say that there are tens of thousands of people who have been or are at #acampadasol, and many more in other cities. Most of the sit-ins had food delivery donations and some even had their own daycare. They also received legal assistance from two lawyers, David Bravo and Javier de la Cueva. The movement has even found supporters in other countries, with protests popping up in cities like Berlin, Paris and New York to show solidarity with the movement in Spain.

While DRY never "officially" merged with #spanishrevolution and still wants to be a movement of its own, it basically has the same goals and therefore supports the movement. There was another movement that is often mixed with #spanishrevolution, called #nolesvotes. Fon my company, supports #nolesvotes by giving out free Foneras and passes so people have free access to the internet during their sit-ins. #nolesvotes translated means "don't vote for them", referring to all the political parties that passed a ridiculous law (the Ley Sinde, on which I will not elaborate here) which was a slap in the face for the rule of law in Spain. Just as with DRY, #nolesvotes, started by the lawyer Carlos Sánchez Almeida, is/was a separate movement, but again had goals that overlapped with the general idea of #spanishrevolution. Most people don't make a distinction between the individual movements anymore and rather see them as unified under the concept of #spanishrevolution now. Leaders of nolesvotes include my friends and partners Ricardo Galli and Eduardo Arcos, fellow professor at IE Enrique Dans and leading Spanish entrepreneur Julio Alonso.

On a side note, some people also voted with chorizos inside the envelopes. A chorizo is a typical Iberian sausage, but the term is also used to refer to corrupt politicians. While the initiative #votachorizo prompted voters to print out a picture of a chorizo, some literally put a slice of sausage in the envelope to voice their discontent with corruption and incompetence in Spain's political landscape.

In the end, what started with a few ideas and different initiatives on the web has become a huge movement on the streets all over Spain and in many other countries. As I already mentioned, most of the initiators didn't know each other at the beginning and only met in person a couple of weeks before the 15M event. The main platforms enabling them to join forces were social networks like Facebook and Tuenti, and of course platforms like Twitter and hundreds (or even thousands) of blogs that supported the movements and spread the word. The sit-in at Plaza del Sol even has its own TV channel, with a mind-blowing 11 million accumulated views so far. Around 45 million people live in Spain.

The local and legislative elections of May 22nd gave encouraging results for the #spanishrevolution. Like an internet start up it seems to have reached its first million people as that is the number of people who have not voted the large 2 political parties. On this election the vote for alternative parties and the votes "en blanco" or for nobody in particular grew by a million. Now PP supporters like to argue that this was really a strong defeat of the ruling socialists whose votes went down by 1.6 million and a win for PP whose votes went up by 400K but this does not explain why PP did not get all or most of the votes of PSOE. While the exact effect of #spanishrevolution on the election will not be known what is clear is that small parties and general discontent grew at the expense of the ruling party and so did the conservative opposition.