The indictment of NFL player Adrian Peterson by a Texas grand jury for reckless or negligent injury to a child has generated an extensive discussion in the media on the topic of disciplining children by "spanking," or corporeal punishment, as commonly practiced in our society. Recent polls indicate that up to 70% of Americans, both Black and White, approve of some form of corporeal punishment of children--with Evangelical Christians coming in at over 85%. 19 States in the USA allow some form of "paddling" in public schools--with Texas leading the pack, having recorded a total of 49,000 incidents in a recent report. 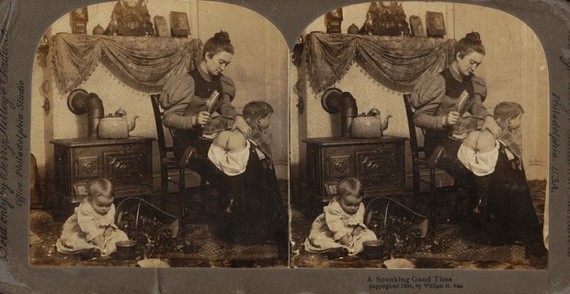 The Peterson case is, of course, extreme--but not necessarily uncommon. He used a "switch," a slim, leafless tree branch, to beat his 4-year-old son, raising welts on the youngster's legs, buttocks and scrotum, but millions of Americans--by far the majority of the over-40 generations--can testify to being "spanked," or in some cases "beaten," with belts, switches, cords, and other objects that left their markings on legs and buttocks.

Spanking in one form or another is as American as apple pie--and the practice is deeply rooted in, and most often defended by, a reading of traditional translations of the English Bible. The oft-quoted quip "Spare the rod and spoil the child" never appears in the Bible but in the book of Proverbs one finds a string of passages that seem not only to condone spanking, but also direly warn parents that unless they use the "rod" on their children they will utterly fail in their upbringing. Here are the quotations in the traditional King James Version translation:

Prov 13:24: "He that spareth his rod hateth his son: but he that loveth him chasteneth him often."
Prov 19:18: "Chasten thy son while there is hope, and let not thy soul spare for his crying."
Prov 22:15: "Foolishness is bound in the heart of a child; but the rod of correction shall drive it far from him."
Prov 23:13-14: "Withhold not correction from the child: for if thou beatest him with the rod, he shall not die. Thou shalt beat him with the rod, and shalt deliver his soul from hell (i.e. death)."
Prov 29:15: "The rod and reproof give wisdom: but a child left to himself bringeth his mother to shame."

These six verses in the Old Testament or Hebrew Bible, as well as a single passage in the New Testament, that speaks of God's disciplining of us as a father disciplines his son (Hebrew 12:6-7), have become the flimsy foundation for justifying a world of harm and abuse to children over our 300 year cultural history--often with lifelong detrimental consequences. Sincere parents, who love their children, but are stuck with a literal reading of badly translated verses taken out of context, are utterly convinced they are doing the right thing.

On the one hand we have testimonials from the majority of us who were "spanked" or disciplined with corporeal punishment growing up, with seemingly no psychological damage, and on the other hand Christian Evangelical preachers and teachers regularly assure parents that spanking will not harm a child, it is positively commanded by God! This Christian reinforcement of "spanking," based on a misreading of these verses of the Bible, is undoubtedly what continues to convince parents of the younger generations, who might have more of a cultural aversion to such practices, that they are carrying out God's will. Here are the cautious instructions on the popular the Focus on the Family web site:

When you spank, use a wooden spoon or some other appropriately sized paddle and flick your wrist. That's all the force you need. It ought to hurt -- an especially difficult goal for mothers to accept -- and it's okay if it produces a few tears and sniffles. If it doesn't hurt, it isn't really discipline, and ultimately it isn't very loving because it will not be effective in modifying the child's behavior.
Have the child lean over his bed and make sure you apply the discipline with a quick flick of the wrist to the fatty tissue of the buttocks, where a sting can occur without doing any damage to the body. You want to be calm, in control, and focused as you firmly spank your child, being very careful to respect his body.

Presumably this "calm" and "loving" beating of a child is to be administered to the naked buttocks of a child--which surely raises some other issues in terms of shame, dignity, and personal respect. Accordingly parents are told that such a practice should not be carried into the pre-teen-aged years!

The fact is these very verses in Proverbs have not only been poorly translated but they have been irresponsibly read out of their historical context and misapplied. For example, the word translated "rod," that might have inspired an Adrian Peterson, or perhaps my grandmother, to go outside and "cut a switch" off a tree in the backyard, is used by King David in an entirely different way in Psalm 23--The LORD is my Shepherd--where we have the line: "They rod and thy staff they comfort me..." (v. 4). The Hebrew word translated "rod" (Shevet) clearly does not have to refer to physical beating but can be a metaphor for general discipline and "leading," as with sheep and a shepherd. It is also the word that refers to a tribal leader--who carries a staff or sceptre of leadership--not to beat his fellow clan members, but to lead and direct them. It is used over 180 times in the Hebrew Bible--never with the connotation of beating.

These and other verses, as well as the overall teaching about disciplining children in the Bible is ably discussed by Jerusalem-based Christian biblical scholar Samuel Martin, who has produced a wonderful book, Thy Rod and Thy Staff They Comfort Me: Christians and the Spanking Controversy, available as a free PDF download here with no cost or obligation. Martin has been joined by a significant number of other informed Christian scholars and commentators who are questioning the both the traditional translation and interpretation of these overly quoted verses from the book of Proverbs. I recommend Martin's work for those biblically oriented folk out there who have wondered about what the Bible really says regarding using corporeal punishment of any kind to discipline children--or for that matter anyone who wants to be more informed on this controversial topic.