Is Bill Sparkman -- the 51-year old US Census fieldworker found hanged in rural southeastern Kentucky with the word "Fed" scrawled across his chest -- a victim of hate crime directed at Uncle Sam? Or the casualty of drug-related violence in a struggling pocket of America?

To date, nobody knows for certain. The FBI is intensely investigating whether Sparkman was murdered; if so, by whom (acquaintance? stranger?); and whether his death is an act of violence against the federal government. 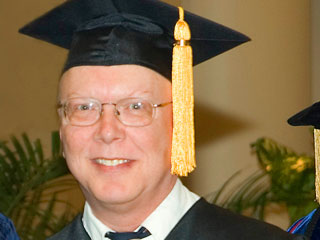 After suffering from cancer, Sparkman worked as a teacher and took on the Census gig to supplement his income. Sparkman's workaday life and violent death -- whatever the cause and whoever the culprit -- highlight the precarious struggles of the white working class and the brewing storm surrounding the 2010 Census.

From the mid 1970s to now, the white working class has faced economic decline not measured simply by stagnant take-home wages, but also by cuts in vital non-cash benefits such as health insurance and retirement plans. This deterioration of earnings and vital support goes hand in hand with employment practices that disadvantage rank-and-file workers (the weakening of unions and wage bargaining, outsourcing, the rising exploitation of contracted part-time help, etc).

Besides these issues, Bill Sparkman's death spotlights the hot controversy surrounding the 2010 Census.

In an April 2009 fundraising letter, GOP chair Michael Steele accused President Obama and ACORN -- "the leftist, urban 'community' organization with a long history of promoting vote fraud" -- of planning "to rig" the 2010 Census.

Representative Michele Bachman (R, MN) declared in June that she would not complete her 2010 Census form. Bachman echoed her fear that ACORN would be part of the Census Bureau's door-to-door information collection efforts. (ACORN's contract to participate in Census taking has since been terminated.) Bachman's stance sparked a viral protest among right wing and Libertarian advocates to boycott the Census.

"Libertarians believe that these questions violate your privacy and will be used as the basis for expanding the size, power and cost of government," says Erich Smith on his "Boycott the Census" website, referring to the Census long form's 53 questions.

For their part, a slew of Latino advocacy groups are boycotting the 2010 Census, too. The Mexican-American Political Association and The National Coalition of Latino Clergy and Christian Leaders, a group claiming to represent 20,000 evangelical churches in 34 states, urge undocumented immigrants not to fill out Census forms unless Congress passes "genuine immigration reform."

Fausto da Rocha, a Brazilian immigrant advocate in Boston, bluntly explains the Latino boycott: "Legalize us before you count us.'' His boycott protests government crackdowns on illegal immigrants and seeks to fully incorporate Latinos into the political process.

High stakes loom behind the 2010 Census and thus the heated controversy. 2010 Census data will directly affect how more than $300 billion per year in federal and state funding is allocated to communities for neighborhood improvements, disaster preparation, public health, education, transportation and much more. Moreover, the 2010 Census determines the number of U.S congressional seats each state gains or loses, and therefore the number of Electoral College votes, beginning in 2012, when President Obama will presumably seek re-election.

In addition to money and raw power, a less discussed, equally volatile dynamic looms in this equation. Since its last head count in 2000, the U.S. Census Bureau has been crunching some startling projections and churning provocative press releases. A Census prediction that makes headlines across the nation is fast becoming a reality: By 2042, whites will no longer be the American majority. The next census is being conducted against this backdrop, what I call "The White People Deadline," 2042. While all racial groups are growing in actual numbers and overall percentages, the Latino population grows the fastest. Experts point to that growth as the largest factor for white people's imminent status as a racial minority.

What's in a number? Quite a lot. Who gets to count the population; how groups and individuals get categorized and counted; and what happens with that count: These questions spawn intense anxiety across the political spectrum - especially in a time of limited public resources, heated controversy over immigration policy, and economic fear.

"The American Dream of the middle class has all but disappeared, substituted with people struggling just to buy next week's groceries."

This commentary comes not from a lefty think tank agitating against capitalism, but from a discharged GI writing his hometown newspaper in Lockport, New York, during the winter of 1992. This working-class, white GI would later blow up the Alfred P. Murray Federal Building in Oklahoma City, killing 168 people.

Not responding to the stubborn nexus of economic hardship and anti-government vitriol can be tragic. Add to McVeigh's economic anxiety a dash of present-day nativism, government bashing, race-based fear, and resentment over the government's Wall Street bailouts, and you have a recipe for even more anti-government violence.

Is Sparkman, the late cancer survivor and single dad, the human victim of this deep anti-government sentiment pulsing in America? Or a working-class casualty in a sordid, pedestrian crime in Methland, USA?

Time and research will tell.

In the meantime, Sparkman's workaday life and violent death offer telling lessons on stubborn problems and disenchantment, so that informed people can enter this debate and not concede it to the fringes.

Chart courtesy of University of Kentucky, Institute for Rural Journalism and Community Issues