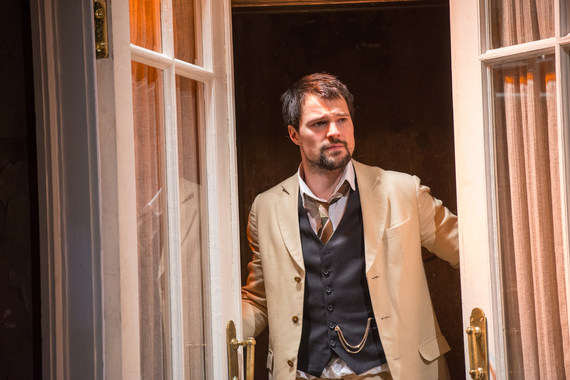 Bravo! The wonderful Maly Drama Theatre of St Petersburg did an outstanding job of reviving Anton Chekhov's Cherry Orchard from the dusty shelves of the last century. Establishing its greatness once again in a refreshing piece of genius by Director Lev Dodin. Sweeping away the cob webs with care, Dodin was able to successfully draw the audience in, without breaking the plays structure and meaning, rather enlivening it with a new orchestration, (so to speak).

In its way the story of the Cherry Orchard is no less relevant today than when it came out in 1904. It was written shortly before the revolution, foreshadowing the demise of enslavement of serfs by wealthy landowners. The play centers on an old aristocratic family who have been living in Paris and return home penniless after Lyubov Ranevskaya, the matriarch, carelessly goes through all their money. Upon their homecoming to their beloved estate, with its extraordinarily beautiful cherry orchard, they are told by the wealthy merchant Lopakhin, once the son of serfs who ran barefoot in the snow, that their home will be auctioned off if they don't do something quickly to remedy the problem. He entreats them to listen to his brilliant idea...By cutting down the trees and building summer cottages they will have income. Instead they practically do nothing, unused to having to make important decisions and not being accommodated, they live in the indolent world of never having to deal with such matters to survive.

Ksenia Rappoport's performance of Lyubov is a brilliant schmaltz fest of outstanding sturm and drang. As broad as she is, she is captivating and familiar in her chest beating arias of tragic loss and pronouncements in a sophisticated borscht belt kind of a way. Her brother Igor played nimbly by Leonid Gayev is a guileless sentimentalist who stands by his family with little ability to solve any problems. It seems as though Fir, played by Sergi Kuryshev, the aged relic manservant in a tattered uniform, is more profound in his ability to endure until death, surviving on little but his astute wits. But the most outstanding and beautifully played character Yermolai Lopakhin belongs to Danila Kozlovsky, the boy serf who becomes a rich merchant. His performance goes under the skin and into the guts of his character. I hazard to guess that there was not one person in the audience who wasn't moved by his great typhoon of emotions laced with victory. When Dodin has him run through the audience like a tornado falling to the divan and singing in English, "I Did it My Way" my friend who sat beside me wept with abandon. That is great acting! When you can move a person from one psychic experience to another in a moment.

Without Dodin's amazing use of film, staging, and revolutionizing the text, would it have been such a night of standing ovations and five curtain calls at BAM's Harvey Theater? I think not.

Spasibo, a million times! I'm sure Chekhov was smiling from a distance.