"... common sense tells us that our existence is but a brief crack of light between two eternities of darkness."
- Vladimir Nabokov

The ghosts are there, when we can bear to look. We inhabit the past, or, more properly, the past inhabits us. It's the only dimension we can know (if imperfectly, interpretatively), the present being quicksilver and the future merely hope or dread. The past surrounds us like dark matter, dormant and dimly-lit, until animated by brief flashes of memory or experience.

Brief as the existence of most creative expression, whether from 5 minutes ago or 500 years ago. The work of all but a few artists, writers, and musicians hurtles from inspiration to Dumpster, a meteor shower of dreams and just as durable. Cultures agree on enduring works, the classics and standards. But most art, especially music, resonates for only a moment before being carted off to the collective unconscious. Two recent releases from Tompkins Square, Bill Wilson's Ever Changing Minstrel and Work Hard, Play Hard, Pray Hard: Hard Time, Good Time, and End Time Music (1923-1936), a three-record compilation from folk curator Nathan Salsburg, snatch nearly-lost music back from the unknowing dark.

Tompkins Square's Josh Rosenthal flipped idly through the last-chance bin at a Berkley record shop until he recognized a name. Not the name on the front. A name on the back, in small print. The producer, Bob Johnston, once ran Columbia's Nashville operation. Because Josh is a record man, the name shouted Bob Dylan (especially that fertile period from Highway 61 Revisited and Blonde on Blonde through New Morning), Johnny Cash (At Folsom Prison, At San Quentin, I Walk the Line), Leonard Cohen (Songs from a Room and Songs of Love and Hate), the stirrings of progressive folk/country at the end of the 60s. Simon and Garfunkel, The Byrds, Lindisfarne, New Riders, Marty Robbins, hell, even Patti Page. All Bob Johnston productions. Though Josh had once worked at Sony and knew the Columbia catalogue well, he'd never seen the record. He took Ever Changing Minstrel home and now you can, too. 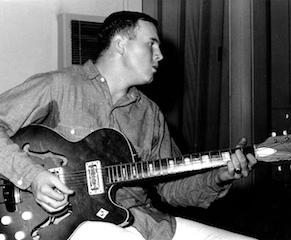 And you should if songwriters such as Mickey Newbury, Guy Clark or Townes Van Zandt speak to you, if you seek a vaguely country sound with the pumping echo of blues and gospel. Wilson's rough-hewn vocals and lyrics situate the songs in his search for solid footing in an unstable emotional, economic and political landscape (in the record's notes, Wilson's daughter mentions "some pretty serious personal duress" during the recording). An Indiana native who knocked around Austin in the late '60s, recording demos, ever on the lookout for a break, Wilson finally packed it in and headed home, where he played dobro in a local band. In 1973, Bill Wilson was 26 and knew he had to take his shot. Bob Johnston made a likely target. 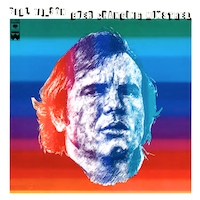 Wilson rolled up to Johnston's door and asked if he could play some songs. Now 80, Johnston remembers calling his stable of Nashville's best studio musicians that night. Though he can't recall all of them, the likely players populated the Blonde on Blonde sessions and most other Johnston productions: Mac Gayden, Charlie Daniels, Charley McCoy, Kenny Buttrey, Jerry Reed - there must have been others. Some of the roster claim not to recall the session and despite Rosenthal's research, we'll never be sure. What remains is the sound, the warm guitars, harmonica and keyboard fills, stinging electric and slide leads, and close, intimate vocals. And the songs. Wilson may have been a journeyman who seized his moment, but he performs with well-travelled confidence. The record was no fluke, just overlooked amid Columbia's corporate turmoil. Ever Changing Minstrel is a good record that sounds like lots of records from the time and place. Not a ticket to eternity but Ever Changing Minstrel deserves its second bow.

As he pursued his work curating folk and traditional music, Nathan Salsburg considered assembling a set that captured the preindustrial rhythms of life: work to exhaustion, take what pleasure lies at hand and then repent of the pleasure. Repeat until final reward. When he got a call from a friend working the demo crew on a Louisville renovation, the raw materials for such a set came suddenly to hand. If scrabbling through moonlit Dumpsters and dustmasked days exhuming 78s and LPs from moldy, disintegrating boxes can be described as sudden. After a couple of years of sifting and cleaning, Salsburg surveyed a wide-angle view of hillbilly music from the earliest, scratchiest recordings to Gene Autry's "Rudolph the Red-Nosed Reindeer," amassed by a collector whose motives will be ever a mystery.

The friend was working at the late Don Wahle's house. Mr. Wahle passed on leaving behind a house full of records, the only and best evidence of his brief transit among us. Beginning in the mid-'50s, Wahle acquired, according to Salsburg's notes: "every country music record he could find regardless of its contents," stacks and stacks of the expected Uncle Dave Macon and Carter Family and the less-travelled Haywire Mac McClintock and Georgia Crackers. Sacred hymns, dance tunes and comic novelties, string bands and straight country, all represented without a clue as to intention or preference. Salsburg shaped the collection with a practiced eye and informed curiosity. 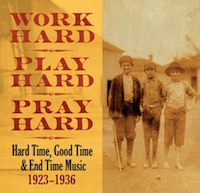 The obvious precedent, which Salsburg addresses head-on in his thorough notes, is Harry Smith's Anthology of American Folk Music (1952), the mythologizing box set that energized the folk revival. Salsburg also tips his hat to less-well-known collector/curators who turned their attention to early hillbilly recordings. (The notes, and essays by Amanda Petrusich, Sarah Bryan and John Jeremiah Sullivan are worth the price of admission themselves, and are presented in an evocative design by Susan Archie). So what does Salsburg's edition of the enigmatic Mr. Wahle's collection reveal?

The selections span 1923 to 1936, an extraordinary time of boom and bust and rapidly evolving technology, in a culture drunk on its own success and poised for a bewildering fall. Rural life was being drained by industrialization and migration with the promise of leisure and mobility, release from the personal geography of hill and holler.

Did the original audiences for these recordings hear the last echoes of a vanishing way of life in Fiddlin' John Carson's "The Farmer Feeds Us All," a song that Salsburg tells us dates back to the Grange Movement of the 1870s? Surely the hard times and train songs about 19th-century characters like John Henry seemed remote even to listeners in the 1920s - though perhaps closer to home by the 1930s. What was the pleasure for then-modern audiences in the corn-sipping and rags of the "Barnyard Frolics," "Corn-Shucking Party in Georgia," or "The Beer Party?" Were listeners laughing at the rustic performers or with them, recalling their own frolics? One response to the runaway progress of the 1920s was a revival of religious fervor.

Oddly for our secular age, the third disc, Pray Hard, may sound the most familiar, with gospel groups and wandering evangelists bellowing the word, often sentimental, sometimes fatalistic, always with eyes on the final reward. Speech and dialogue appear throughout the set. Were urban audiences as fascinated by the sound of rural patter as the music? Though we're now surrounded by the past's digital shadows, gathered in collections such as Work Hard, Play Hard, Pray Hard, the people of the past and their daily concerns become increasingly and ineffably strange. Reason enough to be grateful to the cultural catchers who light up memory, if only for a moment.