The Food and Drug Administration is considering tougher oversight of infant formula labeling and advertising to ensure that the often misleading "structure/function" claims companies make ("comfort proteins"; "designed to be more like breast milk") are valid. For the first time ever, it has proposed guidance for industry and asked for public comment. Below is the letter I sent. At the end, find out how you can take action, too.

I am writing to voice my support for the Food and Drug Administration's proposed Substantiation for Structure/Function Claims Made in Infant Formula Labels and Labeling (Docket Number FDA-2016-D-2241). This is a laudable first step toward resolving an urgent public health issue: The current lack of oversight for infant formula manufacturers' labeling claims.

All formulas, by law, must meet FDA standards for minimum nutritional adequacy. Yet the widespread use of unsubstantiated marketing messages not only confuses and misleads formula-feeding parents seeking truthful and evidence-based information as to how to safely feed their children, it undermines our current national efforts to support breastfeeding as the human norm.

I am a journalist and author focused on this critical message. Importantly, I have spent the past three years studying the root causes, as well as the public health and societal impact, of subpar breastfeeding rates in the United States.

I have found that while, undoubtedly, the complex obstacles impeding breastfeeding success are many and diverse (including lack of paid leave, inadequate workplace support and enforcement of breastfeeding rights), one clear obstacle is that infant formula continues to be viewed as a close equivalent to -- or, astoundingly, even superior to -- human milk. This is a direct result of the unsubstantiated marketing claims that appear on labels. Such claims purport to "improve immunity" and "boost infant brain development." Blanket claims even boast that certain products are "closer than ever to breast milk." 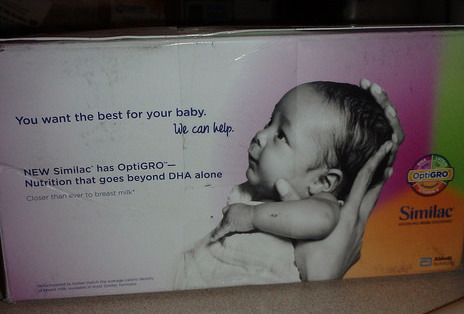 photo by osseous / CC BY

Parents believe these claims because there is a perception that formula is subject to the same kind of testing and approval process by the FDA that drugs and food additives undergo before they can be sold to the general public. There is scant public awareness that the FDA, in fact, does not test or approve infant formula, and that it is the manufacturers themselves that provide documentation that their proprietary products meet federal nutrient requirements and are otherwise safe. That a recent review found the evidence base for the formula companies' marketing claims to be lacking should be a wake-up call to all of us that more oversight is warranted.

It is not only parents who are confused and misled by unsupported marketing claims. As recently as 2004, one study found that 45 percent of pediatricians believed breastfeeding and formula feeding were equally acceptable methods for feeding infants.

Clearly, the following dismal statistics are in line with such misperceptions: Today, while 81 percent of American mothers start off breastfeeding their babies, nearly half will give it up entirely or start supplementing with formula after just a few weeks. And only 22 percent of US babies receive the initial six months of exclusive breastfeeding recommended for optimal growth, development and health by the American Academy of Pediatrics, the World Health Organization and countless public health experts and scientists.

These scientists now know that human milk is not merely a food to be easily reproduced, it is a human tissue -- an amalgam of thousands of complex nutrients, hormones, immunoactive molecules, microorganisms and other yet-to-be-discovered compounds that have evolved over millions of years to meet the distinct survival needs of the human infant. Thus, I strongly support the critical statement "human milk is the recommended source of nutrition for infants" in the FDA's proposed guidance, and urge a guidance revision that any breast milk comparison claims (e.g., "closer than ever to breast milk") made by formula companies must also be substantiated by studies that use a control group of exclusively breast-fed infants. I also support the more detailed technical comments submitted by ChangeLab Solutions in the public interest.

We must acknowledge the many scientific unknowns about human milk and the role the thousands of components in it play in the development of the human child. Yet the formula industry has rapidly expanded the use and marketing of what it calls "high value-added ingredients," including DHA, the breast milk protein lactoferrin, and an ever-widening array of probiotics and prebiotics. These newer additions -- and the claims accompanying them -- are not only unsubstantiated by adequate scientific evidence, they may, in fact, be harmful.

To date, scientists have discovered more than 150 different types of human milk oligosaccharides (each mother produces her own pattern of oligosaccharides that is unique to her breast milk and to her child). These complex sugars are indigestible by the infant but appear to play a powerful role in shaping an infant's gut microbiome, the fine-tuned community of trillions of microbial cells that, again, scientists are only beginning to understand. By focusing on one oligosaccharide to the exclusion of all others, such formulations could be inadvertently throwing an infant's intricately interconnected systemic functions completely out of kilter.

In fact, this may already be the case with two nonhuman versions of oligosaccharides (touted for their "prebiotic" benefits) that have been added to certain infant formulas in recent years: fructooligosaccharides (FOS), isolated from plants, and galacto-oligosaccharides (GOS), synthesized from bovine lactose. For some time now, human milk researchers have cautioned that such supplementation -- with little real understanding behind it -- could be harmful. One recent study has actually linked a rare form of anaphylaxis to the GOS in cow's milk formula.

As we work as a nation to prioritize breastfeeding as the critical public health issue it indeed is, the FDA's proposed non-binding guidance is an important first step to help protect parents from false advertising that may undermine their decision to breastfeed, and their efforts to exclusively breastfeed as long as possible. But I hope that the FDA will go further to protect the public from undue harm, by engaging in formal rulemaking to provide more careful oversight for the mothers and infants reliant on infant formula. The health of our young -- not the bottom line of corporations -- should be our top priority.

Thank you for working to address this most urgent public health issue, and for the opportunity to comment.

Jennifer Grayson
Journalist and author
Unlatched: The Evolution of Breastfeeding and the Making of a Controversy

If you, too, believe that formula company advertising should be backed by real scientific data and/or agree with the sentiments I've expressed, please consider submitting your own short letter to the FDA (look for FDA-2016-D-2241-0001 and click on "Comment Now!") or adapting this excellent template letter from ChangeLab Solutions. Marion Nestle also has a great example letter on her blog Food Politics. The deadline for public comment is November 8.