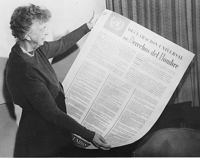 With Barack Obama poised to take office in January 2009, one of the major lessons his candidacy has offered is that movements are built from individuals taking action. In an effort to rally attention to the 60th Anniversary of the Universal Declaration of Human Rights, Amnesty International, working in cooperation with Link TV: Television Without Borders, is releasing the international song and video The Price of Silence.

I first saw The Price of Silence at its New York City premiere, which was part of an
evening hosted at the New York Society for Ethical Culture entitled "Every Human Has Rights: Hope for Human Rights in an Era of New Leadership." Larry Cox, Executive Director of Amnesty International USA, shared the stage with Mary Robinson, former President of Ireland and United Nations High Commissioner for Human Rights (1997 - 2002); Dr. Blanche Wiesen Cook, biographer of Eleanor Roosevelt; and Samuel Kofi Woods, Labor Minister of Liberia.

All of the speakers referenced the window of opportunity at hand for the nation and the world to focus on a recommitment to the original tenets of the Universal Declaration of Human Rights.
Robinson said, "We have a moment now. 9/11 was a precursor of difficulty for human rights." She related how "it was quite lonely in those early days," after the Patriot Act went through. "It [Patriot Act] was not an appropriate way to respond to very real threats," she said. Several times Robinson repeated the phrase, "There can be no ambivalence about torture."

Dr. Cook, who has written extensively about Eleanor Roosevelt and spoke on her leadership role in moving the UDHR forward commented, "On November 4th, we stepped off the bitter road to fascism." Challenging the audience she said, "What follows is up to us. It doesn't matter who occupies the White House, it matters who pickets the White House."

Woods, previously imprisoned and banned from employment in his country, pointed to what he termed "the moment of opportunity," moving from "mere declaration to accountability." Robinson crystallized it as "the responsibility of each of us." Cox concurred, "Everybody can do something, and doing it together we can change the world."

It was in that spirit that the creative team behind The Price of Silence galvanized. They drew on the talents of accomplished musicians from around the globe, several of whom have experienced the ordeal of human rights violations. Emmanuel Jal, the rapper from Sudan who was a "child soldier," recorded his track the day after appearing in front of the United Nations General Assembly - to bear witness to the horrific experiences of his youth.

Steven Lawrence, Vice President of Music and Cultural Programming at Link TV, conversed with me about the evolution and production of the video. "It took over three, months," he said. They worked around the availability of the different artists, who all donated their time. They used sixty actors, making five wardrobe changes, to portray the hundreds of UN delegates. Using the "magic of visual effects," they intercut the close-up shots with real footage from the United Nations. "We filmed the opening of the UN in September of '08," Lawrence said, adding, "When people see the video, they assume we took over the UN for a few days!" Creating a "digital General Assembly" and shooting the artists on stage in front of a green screen, the production team hit locations that included Bogotá, Paris, and the Tibet House in New York City.

The vision for the video's concept came from director Joshua Atesh Litle, who sees hip-hop as the protest music of the new generation. The producer, Andres Levin, is a Grammy-nominated artist and the co-founder of Music Has No Enemies, which is based on the premise that "music as an art speaks to everyone." Lawrence stressed, "The most important thing is that the video and music connects billions of people who don't have these rights. By downloading the song [at iTunes, with all net proceeds benefiting Amnesty International], you are supporting human rights."

The Universal Declaration of Human Rights was adopted by the United Nations on December 10th, 1948. World War II was the catalyst. The aim was to create a doctrine that would guide the international community on how to achieve political, social, economic, civil, and cultural human rights. It was a two-year process, and Eleanor Roosevelt was instrumental in its drafting, later serving as the first chairperson of the United Nations Human Rights Commission. She called the Declaration "the international Magna Carta of all mankind."

Which brings us full circle to the present. Amnesty International USA has requested a meeting with Obama to discuss the human rights agenda of his new administration. In the first 100 days, they have called for a plan and date for the closure of Guantánamo, an executive order to ban torture as defined under international law, and an independent commission to investigate abuses committed by the United States in its "war on terror."

When I spoke to Cox by telephone to ask him what he would like to see The Price of Silence accomplish he said, "I hope the video will help spark a large movement to take action and to mobilize people."

Poet Alicia Partnoy, who survived two years in prison during Argentina's Dirty War (where 30,000 Argentineans "disappeared"), contributed the prologue delivered by actor Laurence Fishburne at the beginning of the video. She wrote:

These are not just words tattooed on paper

No prison cell, no border fence, no torture will stop our plea

No stone, no stain will mar the river of our dignity

My child, for you today our voice befriends the winds-