More thoughts around race and privilege. Here is what happened on Saturday...

I was out and about with my husband and our 10-year-old son, when we saw this beautiful young woman posing for a photographer. Under the hot sun she stood poised in an elegant white princess dress. At first I thought it was a wedding but she was alone and she was young. I quickly made the assumption that it was her quinceañera and gushed about how gorgeous she was. Leo pleaded with me not to say anything as we were about to walk by her (he is mortified by my overly friendly interactions with strangers on a regular basis).

As we passed by I said,
"Tan bella!" I paused and added, "You look stunning."
She replied, "Thank you."
My son shot me a glare and whispered, "You're racist." A bit dramatic, no?

Speaking Spanish to strangers that 'look' like they speak Spanish is the charge.

This is not a new story in our house. A couple of years ago my older son, gave me a hard time about speaking Spanish to strangers. He said it is rude for me (a little lighter than calling me racist) yet it's okay for their Dad (native Mexican). I got defensive and then I shut up and listened.

We talked about why it's different for me being White and being a native English speaker. The privilege is that I feel comfortable pretty much wherever I go in this country because of the color of my skin and because I speak English fluently. The truth is that not everyone feels the same.

But aren't I making them feel more comfortable when I reach out and speak Spanish with them? Aren't I being nice and friendly?

We answered that question with a couple of questions (Intent & Impact):

Am I certain that they speak Spanish or want to? This is one of the most important lessons I've learned... listen. There are millions of Hispanic people that want to be seen as native English speakers because they are, and prefer speaking English because they do.

I listened to him and made some changes.

Instead of just speaking to strangers in Spanish right away I ask in English, "Do you speak Spanish?"

If they say yes I follow with, "Puedo hablar español contigo?" (translation: Can I speak Spanish with you?).

This means that when I overhear people speaking Spanish in the grocery store I can talk to their baby in Spanish because I am certain the family actually speaks Spanish (and I can't help gushing over cute babies). But if I'm at the bank and the Teller looks Hispanic (and even if s/he is speaking Spanish to a co-worker) I don't start speaking Spanish.

This works for the most part. But sometimes I slip. On Saturday I assumed the young woman spoke Spanish so I complimented her in Spanish. She might not have cared at all. But what if she did? Some people struggle their whole life to be feel like they belong here. We all belong here but that isn't how everyone is treated. And that sucks. 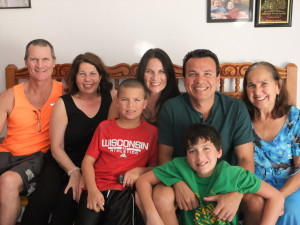 Growing up bilingual starts with family

My kids are sensitive to this because most of their Spanish speaking friends still prefer to speak English. They are growing up bilingual in a country that doesn't always respect bilingualism like other countries.

I asked my son what he does and he shrugged, "It depends on the situation. Sometimes I can speak Spanish and sometimes I can't." In Mexico he speaks Spanish with everyone but in the U.S. he assesses the situation and plays it out differently. He is light skinned; biracial. The rules aren't spelled out clearly in his world yet. Am I supposed to be teaching him them? Because the reality is he is teaching me.

I don't want to perpetuate racism. Yes, I want to speak Spanish and if the opportunity comes up I'll ask. But that is my deal. That is my privilege. I understand why I got defensive. My love for the Spanish language and the Latino culture is deep. I want to honor and connect with everyone I assume to be Latino. But assuming is dangerous. It is my unchecked privilege getting checked.

This post originally appeared on Sara Alvarado's blog at www.SaraAlvarado.com