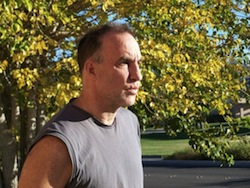 John Lurie has starred in a string of Jim Jarmusch films in the '80s, wrote and directed the cult-hit TV series Fishing With John, and composed dozens of albums and film scores. Yet not only has the modern-day Renaissance man conquered the worlds of film, TV, and music, he's also been exploring painting as a means of creative expression. Reminiscent of outsider art, Lurie's works also reflect a sophisticated lyricism with their charmingly evocative titles. The result is an art form that is both cinematic and primordial, yielding a visual representation of an extraordinary person's psyche as filtered through dynamic internal forces. But while becoming a visual artist may seem like a natural progression for Lurie, he's been painting to cope with the recent effects of advanced neurological Lyme Disease that's left him unable to compose and play music. Luckily for us, however, Lurie appears to be slowly emerging from the existential hell brought on by his illness.

How are you feeling these days?
I'm OK. My nervous system sort of overreacts to being pushed, so then I get migraine aura, I get a lot of noise in my vision, I get a sensation in my head that goes along with that, I quiver. All kinds of stuff. I have no feeling in one or both legs, or my left arm; my left hand doesn't work so well. I get a kind of roaring, buzzing sound in my ear. In the beginning, they told me I was a hypochondriac; I was having panic attacks. But I did all these tests and they all came back completely whacked-out.

Your painting and drawing has helped, though, right?
There was a long time when I was too sick to leave the house. And even in the house, I was really miserable all the time, because I was in pain. My nervous system was just lying to me all the time. So painting gave me something I could concentrate on that gave me relief. I would usually suffer afterward, when I stopped. To have something to do was good. But it wasn't some kind of thing where I was dealing with a psychological problem, you know what I mean?

Do you ever wonder if it's psychological?
No, I know absolutely 100% that it isn't.

What are you doing, besides painting, to help ease these symptoms?
Well, I'm doing a million different therapies. I'm getting injected with ozone, and doing these Chinese herbs, which has helped me a lot. But is this whole interview going to be about my health? 'Cause that could be a little embarrassing... 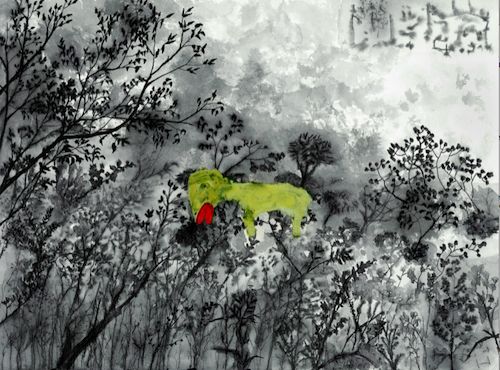 The Invention of Animals

OK, so how is your process different from art therapy?
I believe in art therapy, but it's not that I'm doing this for-- I mean, maybe in the beginning, I was doing it for therapy, because I was trapped, you know?

Are you still working only with pencils and watercolors, or are you using other media?
I've been doing oils the last few years.

How do you feel about sculpture?
The thing with sculpture is, 90% of the time, when I pass a piece of sculpture, it's in public or somewhere, and it's just, how inconvenient that that's there. It takes up so much room, and it's so oppressive. When you drive back from Long Island, there's this big sculpture in the field, this enormous thing, and I always think: "Boy, it would be so much nicer if that was just a field."

I was wondering if you ever thought about making a sculpture for yourself that's not a traditional sculpture, more like found objects put together, like an assemblage.
Yeah, I used to do that. When I was young, when I first moved to New York, it was a different time, and you could find all this stuff on the street that was amazing. I used to collect it, bring it home, and make stuff out of it, all the time. But I'm cured of that now.

What happened to those pieces?
They're all gone. You know, Jean-Michel [Basquiat] used to sleep on my floor. Then I'd get pissed at him and throw his stuff away. I can't tell you how many millions of dollars worth of artwork I must have thrown away in my life.

How long did Basquiat sleep on your floor?
He would stay there for three nights, and then he'd stay somewhere else. That went on for a couple of years.

Like a couch-surfing situation?
No, floor. Not the couch. There was no couch. He slept on the floor.

The title of your new show, The Invention of Animals, is also the title of one of your paintings. Why did you choose this title over the others?
I don't know. There was no big thing. I mean, the show in New York last fall was called The Skeleton In My Closet Has Moved Back Out To The Garden. I kind of like that title better. 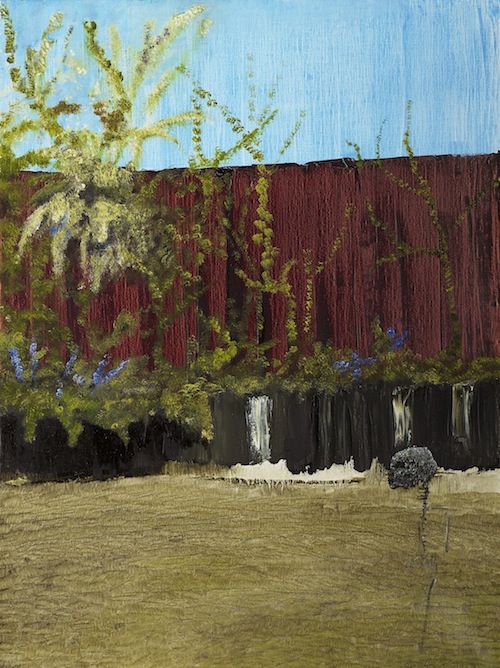 Do you have any animals?
No. I used to. We were in New Orleans when I was a kid, and I used to go every day and hunt for snakes and stuff.

What animal would you use to describe yourself?
I don't know. Is that really gonna be your question?

Yes.
I've been asked that before. That's usually when I end the interview. I'd like you to put that in there exactly like that. You asked me if I was an animal, what would I be, and then you have my answer.

I was hoping you'd say you have some kind of special relationship with animals, that maybe they represent a side of you that you don't ordinarily express.
I mean, I've had encounters with animals that have been really mystical. I've always been really into animals. But the way they appear in the paintings, they come from my mind's eye more than: "I'm gonna draw a dog now." It isn't thought out: "Now I'm gonna draw a bird." They just appear.

Are you spiritual?
Yeah, of course. Getting sick made me delve much further into that. I had a mystical experience when I was in my late teens, early 20s, and I spent years trying to recapture that.

Were you on acid?
No! But I spent years trying to recapture that. It was like I went to God's house for a minute. And I spent years studying religion and mysticism and doing all different kinds of yoga and fasting for weeks on end, trying to recapture that. 'Cause after I had that, nothing else made any sense, really. And then I slowly got back into the world, until I got so back into the world that I was like a heroin addict.

Which pieces in this exhibit have the most meaning to you personally?
The Spirits Are Trying To Tell Me Something But It's Really Fucking Vague is somewhat autobiographical. 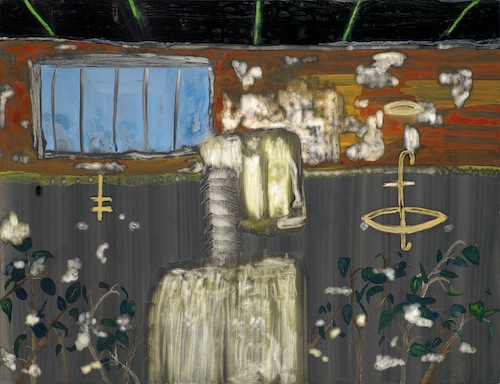 Do you hear music in your head?
Sure, but I try not to, now. I really have to block music out. It's too painful for me. The sense of loss is unbelievable. I mean, my soul came through with music. Music was everything for me. I get musical ideas where I'm, like, "OK, don't go there." And actually, listening to music can be a real problem for me now, because it creates symptoms.

You said when you were younger, you always thought you were going to be a writer, and a few years ago, you said you were working on a memoir. How is that going?
When I first got sick, they told me I had a year to live, and I was writing my memoir really fast. There were really weird things happening with my nervous system and my heart and stuff, and it didn't look like I was gonna make it, so I was writing really fast, and then I couldn't write anymore.

You had a year to live?!
Nobody actually told me I had a year to live. How it went was, I did a test where my blood pressure and pulse just acted completely bizarre. And the neurologist told me that I had this rare disease, and sent me to this website, and it was, like, "Well, your family has to help you now. You can't do anything. You can't move a chair. You can't feel ashamed. People have to do everything for you now," and then it sent you to a more legitimate medical website where it said that 90% of patients die within a year.

Were you on a bunch of meds that made the symptoms worse?
No, because I didn't have a diagnosis yet. I just had all these symptoms. I wasn't going to start taking pills until I knew what was wrong. I mean, they're mostly a bunch of arrogant idiots, these guys. I have a good GP in New York, but other than that, I don't see anybody anymore. As far as the brain and neurology is concerned, they just know very, very little. And because they know so little, they want to pretend that they're God, because their mother told them they were God when they finished medical school, and then they get pissed at the patient when they don't know what it is.

Does the fact that you're a creative person exacerbate or relieve your symptoms?
I am sure having the outlet helps me in some way. I know that when I got really sick and had to stop playing music that it was an unbearable loss. I never thought that painting could come out of my soul in the same way. But I think that it does at this point.

Have you ever wondered whether your condition is related to your creativity?
I wonder that too. When you look back through history, it's like, they think van Gogh had temporal lobe epilepsy and Dostoyevsky had this... I did have one neurologist tell me: "I think you're just wired different than everybody else." Which is possible, you know. It is possible.