Forget about the NSA and the phone networks. There's another secret network you should know about. I call it "special excess," though it's known in the telecom industry as "special access." You won't hear about these secret wires. For example, when AT&T and Verizon tell us they are losing lines, the special access wires are not part of the accounting, even though they represent the majority of access lines in America. Or when you hear that local service is losing money, the secret is that much of the revenues from these "special" networks are not being added to that calculation and are hidden from sight. Some analysts estimate that they are overcharging the competitors and businesses that use these networks by more than $12 billion annually. Or worse, this network has obscene profit margins of over 100 percent last time there was any data available, which was 2007.

And yet there's nothing special about special access lines. They are just more wires and services that are part of the network, as this diagram shows. 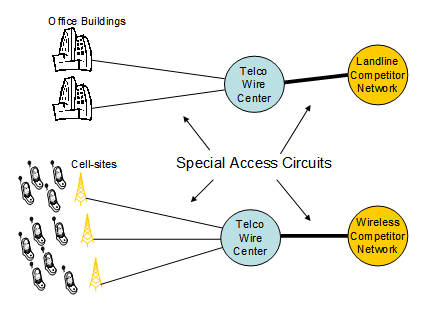 And of course you are paying for this excess. When you make a wireless call, it ends up going to a cell tower and then takes a ride on a wire. Or when you download or upload using your broadband connection, these bits are all traveling over these monopoly wires.

In fact, No Choke Points, a group that's been talking about special access for years, states:

Nearly every American uses high-capacity broadband lines each day. These lines connect our cell phones, workplaces, banks, factories, data centers, universities, and hospitals to enable communications among customers, employees, suppliers, government, and each one of us.

And according to most sources, these wires are monopoly products, as the incumbent phone companies -- AT&T, Verizon and Centurylink -- control an estimated 80 to 90 percent of the market in their own territories.

This is one of the reasons that America's broadband is expensive or your cellphone service has data caps. Think of it like the gas in your car. They keep raising the price. Special excess is the gas of the Internet; the more expensive it gets, the less you get to travel, and at slower speeds, and the more you have to pay.

And at this time there is a war going on about these services and wires, even though this has long been simmering, in part because the FCC has been kicking the ball down court since 2005 and letting the incumbent companies -- AT&T, Verizon, and Centurylink -- reap the benefits.

But this is only a small brushfire compared to the host of hidden secrets no one is talking about -- until now. I'll get to that.

AT&T Says "Go Eat Some Cake" to Competitors and Businesses

Why now? In October 2013 AT&T decided that because "special access" is a monopoly service, and because the company is closing down the "old networks" and going to Internet protocols (IP), where there are no regulations or requirements, the company can simply raise rates or start phasing out long-term contracts to competitors. And at some point in the future, since they control special access (the price of gas) as well as the use of the wireline broadband, Internet, phone cable and even the wireless networks, they'll just get rid of those other pesky companies -- wireline, broadband or wireless.

To demonstrate the arrogance, AT&T sent this letter (excerpt) to their business customers and competitors using these networks:

After an outcry by companies whose business depends on these services, from Sprint to Earthlink (the link includes the AT&T letter), the FCC stepped in to halt AT&T's plans and started an investigation at the end of 2013. And it's about time, since the last data collected by the FCC was in 2007.

America has been held hostage by three companies -- AT&T, Verizon and Centurylink -- who control monopoly wires in their territories and don't compete, and the government has been asleep (or worse).

As of 2007, the profit margins for these services would make a Wall Street analyst drool. As this next chart shows, at one point the profits were regulated at 11.25 percent by the FCC -- that's the gray portion all the way at the bottom of the chart that says the "last FCC authorized rate of return."

And then wham! Let the good times roll. According to a few sources, as of 2007 the profit margins ballooned to an average of 101 percent for the incumbents AT&T, Verizon and Centurylink. (See presentation.) 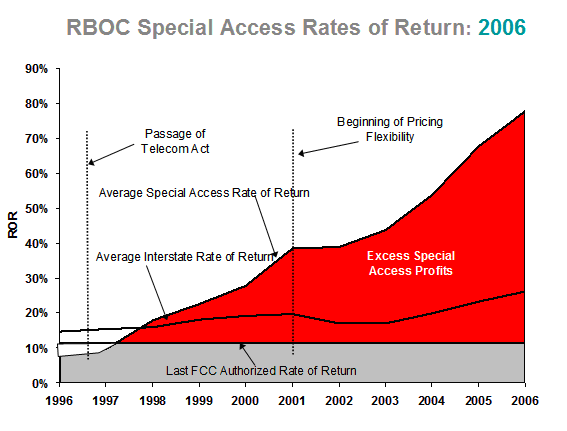 How much is that in extra dollars collected? According to a report by Economics & Technology:

Simply projecting special access overcharging forward using the whopping $9 billion a year, about $91 billion extra was overcharged by the end of 2013. However, according to some, revenues have been increasing, and they estimate it to be around $12 billion, bringing the total to over $100 billion -- and counting.

And this should all be thought of as a "pass through" -- because someone has to pay it, and it might as well be you. So the cellphone companies' costs for data, the data caps, or the costs of broadband or even the speed of America's broadband connections are all tied up in this.

And other reports have been published, such as one by Economists Incorporated (EI), which claimed that new jobs and economic grow would accrue if these fees were reduced:

Now for the Secret: That's Not All of the Overcharging or Hanky Panky

Of course, the phone companies claim that these numbers are inflated, that the markets have changed since 2007, especially since everything is going IP. But no one is talking about the other secret money and more customer overcharging.

The real "special access" kicker is the collusion between the wired state-based utility and all the separate entities that offer wireless or broadband or Internet or long distance, among others services.

In our report on Verizon New York's affiliate transactions with the other Verizon affiliate companies, it was clear that Verizon Wireless is getting serious financial perks on special access fees and even the "special access" wires, such as the wires that run to the cell towers, and these add expenses to the cost of local phone service.

Fran Shammo, Verizon's EVP and CFO, stated that the wireline construction budgets have been diverted to charge customers for the wireless companies' construction needs:

The fact of the matter is Wireline capital -- and I won't get the number but it's pretty substantial -- is being spent on the Wireline side of the house to support the Wireless growth. So the IP backbone, the data transmission, fiber to the cell, that is all on the Wireline books but it's all being built for the Wireless Company.

And it gets worse. In our analysis of the "special access" services sold to wireless competitors, it appears that Verizon could be paying one third of what other competitors are paying, based on Verizon's own SEC-filed state reports.

And this is just scratching the surface of these collusive ties of the special access networks with the rest of the wireline and wireless networks owned by the same company.

The Double Whammy on Customers

The telcos have us coming and going. Because the competitors are being squeezed, the other wireless or broadband companies can't simply lower their prices, and worse, AT&T and Verizon, the incumbent phone companies, have given their own affiliates financial advantages. And so the special access costs are then passed through to the customers. But it gets worse. Verizon is dumping expenses into the utility and not paying their fair share back, and there's a vicious circle as the "losses" are being used as an excuse to raise rates -- and save money on taxes. So these fees end up impacting all services in varying degrees, and we pay for it multiple times and in multiple ways.

And this collusion appears to pay off. Verizon's current profit margin for wireless services was about 50 percent at the end of 2013, and that's in part because they aren't paying their fair share to use the wired networks -- more profits for wireless.

Of course there have been no audits of the affiliate transactions for at least a decade or two, either by the FCC or by the state commissions. Worse, the companies no longer have to give the FCC data for public inspection, nor are they required to supply their financials to the state public service commissions that are made public, or even supply any state-based information to the SEC, such as filed quarterly or annual reports.

Ouija boards and tarot cards are all we have left to cipher what the companies are really doing with these affiliates behind the scenes.

Should Sprint and T-Mobile Merge?

I'm never for eliminating competitors, but it is clear that there are no other companies to add balance to this collusion of the wireline "special excess" networks and the wireless companies.

Neither Sprint nor T-Mobile has the majority of market share today, and combined, they aren't as large as either AT&T or Verizon, who own the wires and have the majority of the wireless markets.

In the end, even if the FCC adjusts the profit margins on special access, besides a lawsuit by AT&T and Verizon the next day, they probably won't fix the collusion of the company's affiliates to harm competitors and thus harm customers.

This is also tied to the net neutrality issue, as competition is the preferred fix. If the service provider or ISP blocks or degrades your service, you can just take your business elsewhere. Today, there are few places to go, and that also depends on where you live.

Without strong competitors with deep pockets who want to take on the incumbents on all levels of services -- wireline, wireless, broadband, or cable, etc. -- these issues won't be resolved in the public's favor. Worse, depending on the FCC to fix this is problematic, especially if there is a Republican president and therefore a Republican FCC after the next election, which could undo any changes that were made.

As I wrote previously, we are at the end game in telecommunications, and there appears to be no end in sight in terms of fixing the current problems with serious solutions -- yet.