As an athlete my entire life, a true tomboy growing up, I thought I understood the draw of sports. But it wasn't until I spent a few days with Special Olympics athletes that I realized just how powerful -- and empowering -- sports can truly be.

If you haven't heard by now, the Special Olympics 2015 World Games commenced in Los Angeles this week. It's billed as the largest sporting and humanitarian event on the planet in 2015, with 6,500 athletes from 165 countries. Despite lots of advertising and banners all over town, I couldn't' quite get my head around the magnitude of such a gathering until this past Sunday afternoon while sitting in the stands watching swimming heats.

That's where I counted team shirts from no less than 50 different countries worn by athletes waiting to race.

We're used to seeing global diversity here in Southern Californian. But what stopped me in my tracks wasn't the 60,000-plus crowd that filled the Memorial Coliseum at Saturday evening's opening ceremonies, nor my walking next to American royalty of Kennedys and Shrivers.

It was seeing four navy blue letters on the white t-shirt of a swimmer. I-R-A-N. 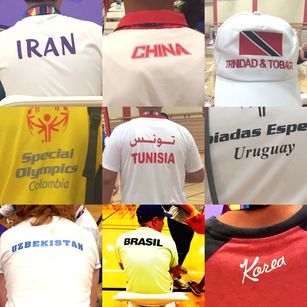 Regardless of nuclear treaties, social uprisings, votes over the Euro, famine or drought, a world of athletes, coaches and families nestled into town to do what they've been training for -- compete at their best.

This is one of several lessons I learned while volunteering to help the region prepare for the Special Olympics World Games.

In a glitzy town like L.A., driven by shiny celebrity image and cut-throat ambition, a different kind of glow has been cast over the city by the energy and spirit of the Special Olympics. It's the better angels of humanity, filled with hope, love and lots of hugs. I suppose we are the City of Angels.

As I walked around during opening ceremonies and the first day of competition, I was pleasantly surprised every time an athlete would stop me, make eye contact, smile, and then award me with a giant hug. This happened regularly. Sometimes, they would share with me their race schedule and best times they plan to break, or sometimes they would say nothing at all.

The nonverbal communication can be just as powerful as the verbal.

But, don't misunderstand me. Special Olympics athletes are dedicated competitors. Sports has changed their lives, adding meaning and gravitas, and they are serious about their particular sport. They have coaches, trainers and a team of support, like any other world class athlete. 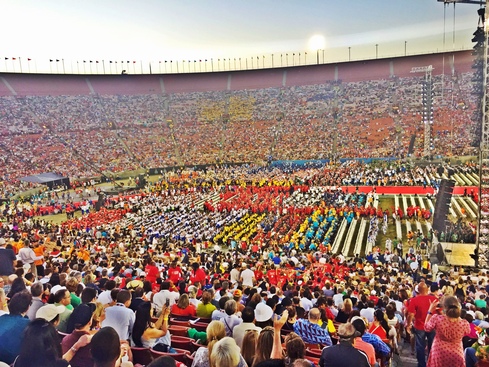 At the same time, the massive sign under the Memorial Coliseum's famous torch reads, "Let me win. But if I cannot win, let me be brave in the attempt."

That sign made me wonder how different, better, all of our lives would be with more courage and initiative.

Athleticism transcends winning. It provides opportunities for personal growth, self discipline, risk taking and acceptance of loss. That one is never easy. Who likes to lose? But sports, especially the Special Olympics, teaches athletes how to handle defeat with perspective -- a life lesson we can all practice.

Athleticism also shines a light on one's abilities instead of the flaws. Perhaps that is why so many families with loved ones living with intellectual or physical disabilities gravitate to sports.

And it most certainly is a family undertaking.

A few weeks back, leading up to the World Games, I had the honor of joining some of my work colleagues and a handful of disabled athletes to carry the Special Olympics' Unified Torch, a flame that was ignited in Greece and was making its way across the United States to light the cauldron at the World Games. There I met a volunteer who was driving one of the pacer vans. He had been volunteering with the Unified Torch Relay across several states the past month. He shared that his daughter had competed in various Special Olympics competitions.

He also said something I will never forget.

Doctors told him thirty-some years ago that his daughter was born with a disability that would have her living with he and his wife for her entire life. Today, the family looks back in awe having traveled the world because of their daughter's involvement with sports, and the Special Olympics in particular. He and his wife have even met heads of state and royalty from different countries! They've made their daughter's athleticism their lives too, through fundraising, volunteering and traveling with her.

As a woman in her mid-forties categorized as "high risk" on the fertility scale, I often think about my escalated odds of having a child with a disability, usually in the context of how that would impact my life. Never had I imagined the beauty and adventure that's possible as articulated by that father in the pacer van. He single-handedly shattered many assumptions of mine.

Everyone's life gets to have purpose and meaning.

Being around Special Olympics athletes and families recently reminded me that those opportunities are everywhere, from sports to the arts. Lately for me, it's been through writing. So, acknowledge those things that have given your life meaning and purpose, and look at what's next. 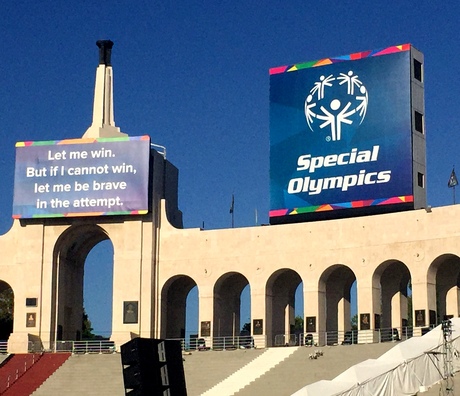