In today's society, the roles of women and mothers seem to be changing at the speed of light, with each day bringing a new way to perceive these important figures. From traditional, docile housewives to respected figures in the workplace and at home, society in developed countries has all but abandoned antiquated ideals focusing on the importance of child-rearing. For men, however, the perception of them as being the primary breadwinners and heads of households has not changed much throughout history. Most still portray the male figure as solitary and cold rather than the loving and caring husbands and fathers they usually are. This phenomenon and stagnation of progress, whether regarded from a feminist perspective or otherwise, poses a problem for men and women alike. 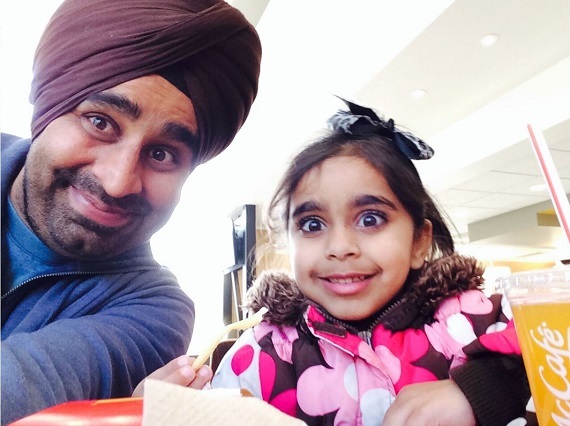 (Photo: The author and single father Gurdeep Pandher and his daughter Sahaj Pandher playing while making funny faces for selfies)

One situation in which this issue is most prominent is single fatherhood. While single mothers are considered to be admirable and perfect role models for their children, single fathers are appreciated to a far lesser extent. Common myths about single fatherhood include horror stories about abuse, children lacking in attention and love, and emotional shortfalls when the children become adults. Needless to say, these stereotypes guarantee a far lower success rate for single fathers and gay couples looking to adopt a child, and strange looks at the playground. In extreme cases, the police have become involved because a 'concerned' mother feared for the safety of a child after seeing a 'strange man' following a young girl who was actually his daughter.

These prejudices only seek to perpetuate gender roles by assuming the father to be involved in his children's lives only as a bystander rather than as an active guardian. On the surface, this can be considered to be only a problem for men as they are the ones directly facing this social barrier. It may seem a small price to pay for continued dominance in the eyes of a patriarchal society, delegated to professional careers rather than mind-numbing peek-a-boo games and house cleaning. However, attempting to overthrow these limiting conceptions can be exhausting and depressing for single fathers, who seem to get no recognition for all of the work they do.

Additionally, the rigid view of men being breadwinners also set back progress for women who are seeking equal pay for their work at the office. As long as men continue to be regarded as earners more than caretakers, women will be automatically delegated to the latter role. Therefore, in order for gender equality to become a reality, the different ways men and women are perceived need to meet in the middle. Lasting progress cannot be made by empowering women alone; men need to be encouraged, empowered, and allowed to embrace their caring side in the same way that women are being inspired to pursue careers in fields that used to be dominated by men.

Obviously, the lack of respect for single fathers is a huge problem in society, acting as a barrier against social progress and gender equality. Despite many proposed solutions such as paternal leave, marketing campaigns, and counseling for lone male guardians, the rate of change is nowhere as close to that of the feminist movement in the late twentieth century mostly due to apathy and a lack of understanding regarding the topic. Perhaps there are some odd figures that interpret a lack of respect for fatherhood as a sign of corporate power, but it is undeniable that most consider getting recognition for men in caring roles is integral to achieving a more equal world.

Paternal leave, despite its short length, allows the father to bond with his newborn child. Optimally, it increases productivity as the father is not constantly distracted at work during the first few weeks after birth. Advocates claim that the period also ingrains a more well-rounded perception of family in the infant, and creates a stronger relationship between all family members later on in life. However, the opposition state that women need maternal leave for recovery purposes after the grueling process of childbirth, and that paternal leave takes away the 'credit' from women. As a result, while some countries in northern Europe and a scattering of companies have leave policies for fathers, most are still unsupportive.

However, more success could be ascertained through popularization of single fathers in media. Needless to say, what happens on the screen more or less influences what is achieved in real life. Therefore, by having stories featuring a more diverse range of characters, including loving male guardians to breach the stereotype of how fathers are unreliable figures, society will be more acclimated and accepting to this group. After all, the presence of powerful female figures contributes greatly to the feminist movement and empowerment of women, so the portrayal of men in a softer light will definitely contribute to social change. Only empowered human beings, with empowered men, empowered women, and empowered children, can build a balanced and stable empowered society and the focus needs to be shifted from genders or classes to people.

Meanwhile, in order to support single fathers in a subtly discriminatory society, it is important to have discreet and convenient counseling services and helplines. The services provided by these can include booking a babysitter, parenting advice, and support groups. These will provide validation from the community for single fathers, and reduce stress and likelihood of depression. As well, there has to be less prejudice in the donation of social services such as food stamps. Not all men are financially successful, and, like households with single mothers, it may be difficult for one parent to make ends meet for their children.

Ultimately, the struggles faced by male guardians, single fathers especially, is a testament to the defects and inequality plaguing society even today. In order for progress to be made, the abolishment of traditional perceptions of both genders must occur in the office and at home. Meeting in the middle is key to building a socially just future, and achieving respect for single fathers is only the first step. Although there are many clever solutions being thrown around, universal implementation and support is necessary to gain traction on a larger scale. There is a long way to go between society's current position and the desired, futuristic place.

US Presidential Election 2020
Breaking news, analysis and the latest polls on the presidential race from HuffPost’s politics team
See More
More:
fathers and daughtersfather's dayParentsfatherhoodsingle fatherhood
Newsletter Sign Up
Raise the kind of person you'd like to know
Subscribe to our parenting newsletter.
Successfully Subscribed!
Realness delivered to your inbox