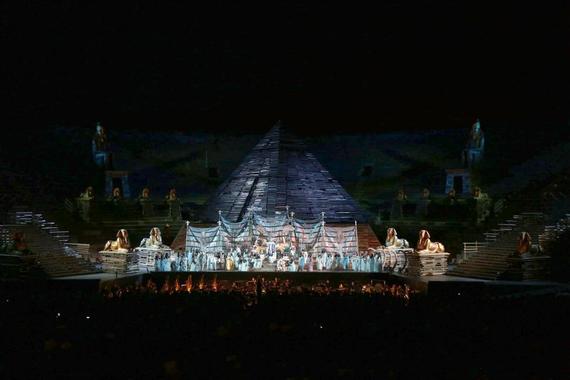 The setting of Aida in Ancient Egypt is likely one aspect of the opera that has made it very popular with audiences around the world, perhaps because it conveys the feeling that you can relive the splendor of that culture vicariously through the opera. Of course, Giuseppe Verdi's stunning score also contributes to the experience, and helps captivate the audience.

The work met with great acclaim at the premiere in Cairo on the 24th of December in 1871. The costumes and accessories for the premiere were designed by Auguste Mariette, a French scholar, archaeologist and Egyptologist.

Scroll forward to Verona in 2016 at the Arena di Verona on the night of the 17th of July and the production of Aida directed by Gianfranco de Bosio was no less lavish. The 1st century arena in Verona provided the perfect setting to appreciate this epic opera by Verdi. The spectacle included a large number of performers onstage, both singers and dancers, along with a parade including a few performers on horseback, and a scene that featured the simulation of a boat moving across the stage. Very impressive. For such an important opera, you would naturally expect a strong singing cast, and that was certainly the case that night. An appreciative audience applauded at length at the end of the production for the well-rounded and magnificent cast. The full cast listing can be viewed on the link below, but there was a substitution that night for the role of Aida and Nunzia Santo di Rocco sang it magnificently.

Being in Verona to see this opera, one can't help vaguely associating two famous tragedies that are juxtaposed: Romeo and Juliet versus Aida and Radamès. While the stories are set during completely different eras and under very different circumstances, the thread of an intense love that leads to an untimely death unites them, even down to the detail of a final tomb scene. During the production, the tension of the impending tragedy seemed to permeate the atmosphere, perhaps heightened by the historical context of Verona.

The opera Aida played a key part in the history of the Arena. The first opera mounted in 1913 when the renovated arena first opened was Aida. Operatic performances in the arena commenced in that year in earnest due to the zeal and initiative of the Italian opera tenor Giovanni Zenatello and the impresario Ottone Rovato. The first 20th-century operatic production of that work at the arena was on the 10th of August to mark the anniversary of the 100th birthday of Verdi. So, the performance of this opera in the arena setting in 2016 takes on the additional significance of the history of the venue.

Thousands of people attended the performance that night and many of them had come all the way to Verona from great distances to catch several of the operas during the festival. The rich production of Aida put on by the Arena di Verona made it well worth their journey, and provided the perfect ending to a wonderful weekend of opera.