Cambodian Parliament Member Mu Sochua received a standing ovation from the sold-out, standing room-only crowd at the red carpet world premier of REDLIGHT last week. Produced and narrated by UNICEF Goodwill Ambassador Lucy Liu, the film left many stunned and some in tears. It is that wrenching.

"I am not a victim in Cambodia, but a survivor of Cambodia!," Sochua told the guests present. "In the darkest recess of human trafficking, there is hope!" The film featured the work of both Sochua and Somaly Mam, forming a narrative of the children they have helped out of the pits of exploitation - such as Reena and Sokha. 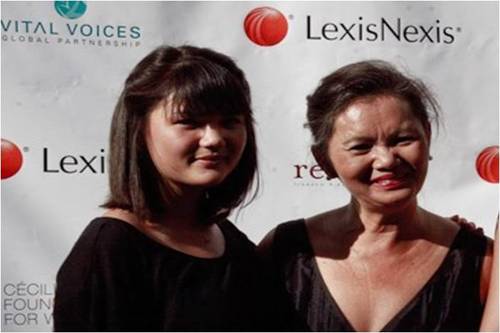 Deftly blending horror and compassion, hope and futility, REDLIGHT is the second film in a trilogy that is changing the dynamics of child trafficking globally. Filmmaker Guy Jacobson has mastered the emotional edge of sexual slavery and manages to bring it to us in our sterile lives so that we get it - and want to stop it. The photography of the film is superb, with the breathtaking beauty of Cambodia juxtaposed with the squalid conditions of the children forced into the country's unspeakable brothels.

Rarely does a film have such in-depth access to the characters it follows. REDLIGHT weaves together the touching stories of its subjects into an inspirational journey for the audience. It is a true accomplishment in filmmaking.

The narration by Lucy Liu is familiar enough so that we are able to handle the unfamiliar. The quality and sensitivity of the film assures that its message will resound with audiences around the world as it is sure to win awards from Cannes to Sundance. If you chose to see only one documentary this year, make sure it is REDLIGHT.

More amazing than the film is the dangers Guy Jacobson overcame to film it in the shadow of the mafia, for whom human life holds no sanctity. He continues to risk his life daily fighting to expose and sabotage organized crime's most lucrative business. 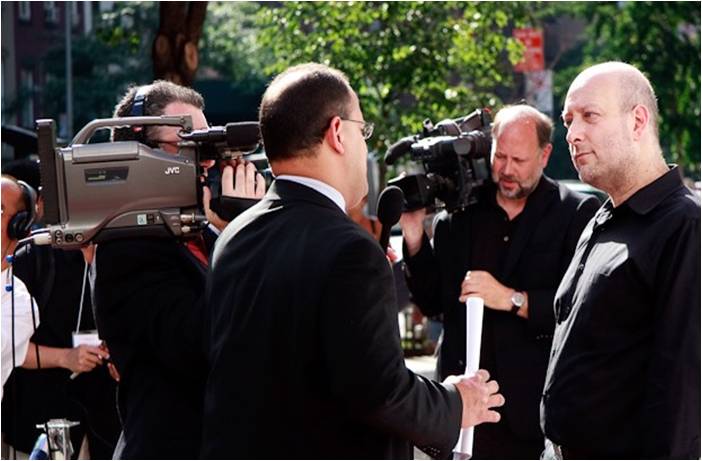 After the film, Sochua told the many gathered, "The movie was so real I could smell the brothel and feel the T.B. in the hospital. My Cambodia is this film." Sochua is a politician and a human rights activist. "I am a member of the Cambodian parliament - a member of the Opposition - who has been stripped of my immunity," she told the hushed audience. She represents the Sam Rainsy Party. 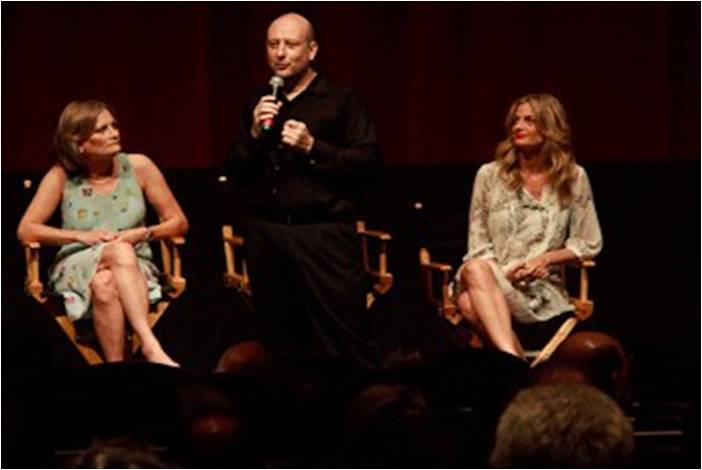 Sochua has refused to pay a frivolous fine imposed on her by the corrupt court there for 'defaming' the Prime Minister because she sued him for calling her a whore. "When I go back, I might be put in jail."

"My goal is to be re-elected and continue the fight for justice," she told us. "Justice! Hope!," she reminded us. "Justice is my own pursuit," Sochua said. 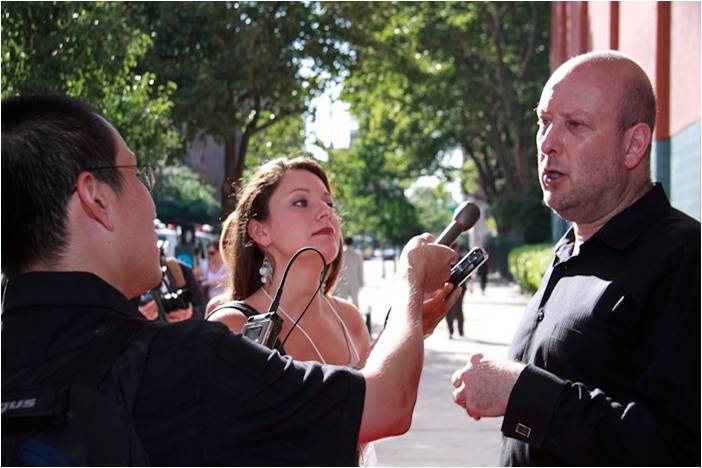 Guy Jacobson is a passionate filmmaker who understand child trafficking - and exposes it.

As I wrote last week, not often does a filmmaker present both an untenable social problem - and its solution. Guy Jacobson has done that. As filmmaker, former banker and lawyer, Guy's past and present reflected much of the audience comprised from the top ranks of the arts, finance and law. LexisNexis is the film's major corporate sponsor.

LexisNexis' involvement made a deep impression on many of the film viewers. "LexisNexis is to be commended for their support. It is wonderful that they have put their resources behind such an important problem," Dr. Lucie Lapovsky stated. Roberta Cooper of Vital Voices Global Partnership added, "It is critical that corporations take a role in this international problem, as has LexisNexis, among others in the travel and business community. Their important work should be publicized and praised widely." 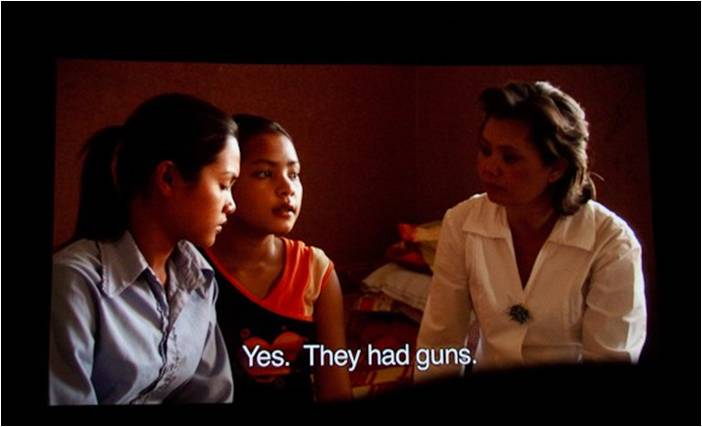 Mu Sochua is empathetic to the stories these girls, one a victim and the other her big sister.

The brilliant film REDLIGHT is shown from the perspective of two Cambodian women opposed to childhood sexual slavery. One, Sochua, and the other Somaly Mam, a woman who escaped the brothels to dedicate her life to freeing others. Child trafficking expert Kevin Bales, author of Ending Slavery and President of Free the Slaves, is also interviewed in the film. See the film's trailer on Vimeo. 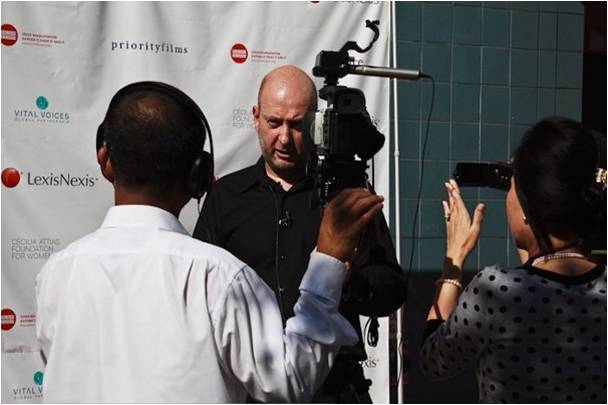 Filmmaker Guy Jacobson and his team have made a gut-wrenching plea to end child trafficking.

The deeply moving film points out that staggering statistic that 2.5 million children aged 18 months to 18 years are exploited for their young bodies each year. They can be raped 20 - 30 times a day, and up to half of them will die from shock, torture, drugs, and/or AIDS. But these numbers are difficult to grasp. The film also shows you a few real children and tells their tales. That anyone can get.

I interviewed many audience members after the Premiere. Dr. Lucie Lapovsky of Lapovsky Consulting told me:

Child trafficking is a complicated issue and I certainly do not have the solution. Clearly, traffickers should be prosecuted and not granted any leniency. Certainly, the film left me with the feeling that the economic problems in Cambodia exacerbate the situation.

The brothels should be outlawed or there should at least be aggressive enforcement to make sure that there are not children involved. Parents should be educated about what can happen to their children when they sell them.

I hope we can all be helpful in eradicating this terrible problem of child sex trafficking and can help make Cambodia a truly democratic country. 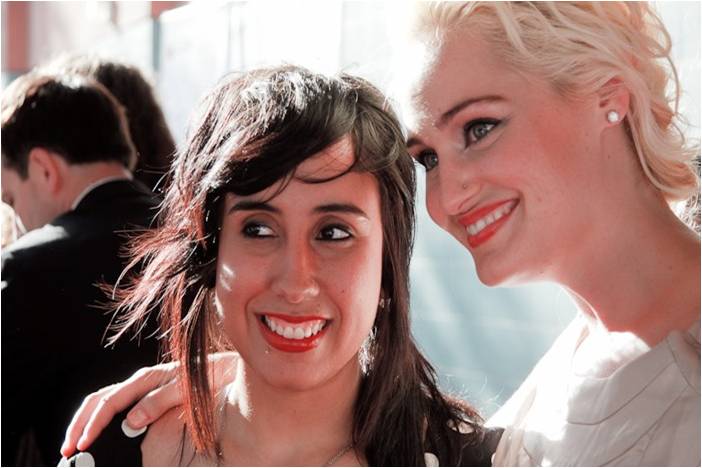 A red carpet premiere in NYC is a million miles away from children forced into sex - or is it?

Roberta Cooper, Co-chair of the Vital Voices Connecticut Council, attended the Premiere and told me afterwards:

The 'solution' lies in a multi-pronged, coordinated effort that includes the police and the judiciary and the press. There should be consequences for the patrons of the trafficked women and girls. One area that the film did not focus on is girls and women who are transported to other countries, including the United States. We need international sanctions and severe consequences for the perpetrators as well as assistance for the victims. United Nations initiatives are important as well.

I did see guy's other film Holly. I thought both films were excellent, but REDLIGHT affected me more. It had the narrative elements of Holly but was a documentary.

Particularly important is Sochua's work -- and also that of Somaly Mam -- to give the victims a place in their communities, counseling, and training in work through which they can become economically self-sufficient. It is very difficult for the rescued girls to overcome the stigmas placed on them by their own culture.

REDLIGHT is the second in Guy's trilogy, known as the K11 Project. Holly was the first in 2007, the story of a 12-year old prostitute who captures the jaded heart of a foreigner living in Cambodia who in turn goes out of his way to rescue her from the criminal element that controls her. Holly premiered at the United Nations, with honorary committee members including Susan Sarandon and Hillary Clinton. 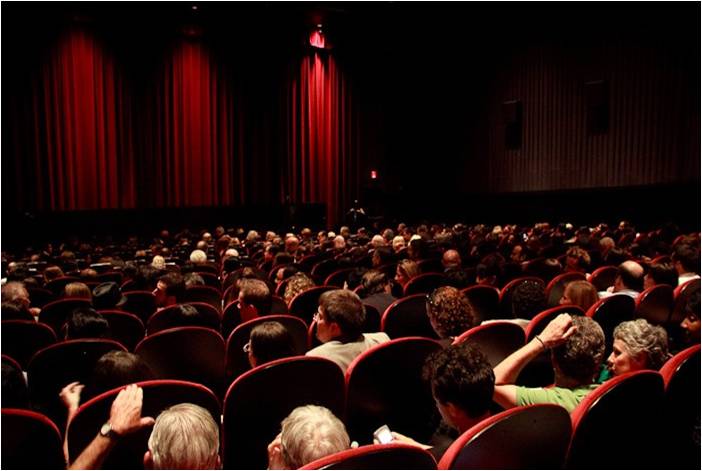 The main theater was completely full, and another audience watched from the adjacent theater.

The REDLIGHT Children Campaign originally aimed at pressuring governments to enact or amend legislation to address this issue more effectively and allocate more resources towards enforcement of laws. This has proven to be difficult. Now, in addition to the original strategy, Guy wants to make it more difficult and costly for perpetrators to sexually abuse children. REDLIGHT Children has partnered with its sponsor LexisNexis to create both an international case law database for trafficking, and a trafficking offenders' database to assist lawmakers and prosecutors. 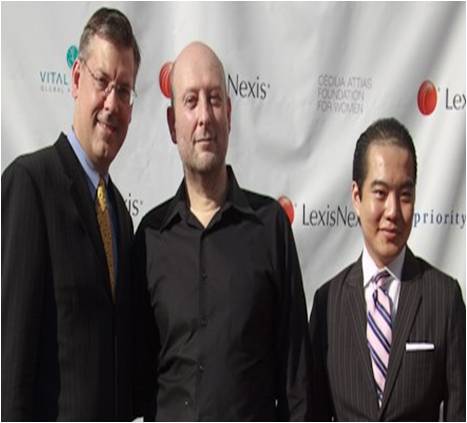 "REDLIGHT" director Guy Jacobson with me and John Lee at the premiere in New York City.

Following this superb film I know I cannot answer one question: Why has the United States and Somalia not signed the United Nations Convention of the Rights of Children (CRC)? As founder of Orphans International Worldwide (OIWW), I demand that our own nation takes responsibility for the lives of the children whose innocence, safety - and often lives - have been so terribly compromised. Mr. President, we owe this to these defenseless children.

For further issues, facts and the rule of law, see LexisNexis website. All photos by Arthur Eisenberg (Arthur@nycArthur.com).