The Spectra pipeline, a high-pressure natural gas delivery system that aims to bring hundreds of millions of barrels of hydrofracked gas directly into New York City, has sparked controversy just a few short months before its scheduled completion.

But now, with the pipeline nearly complete (construction started almost a year ago and is expected to be done by November), activists are up in arms. 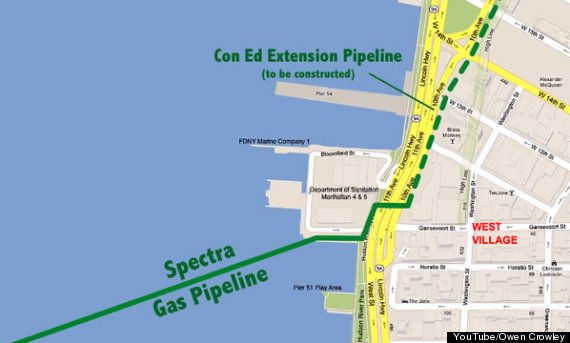 A video produced by grassroots nonprofit group OccupyThePipeline warns of the dangers such pipelines pose in terms of potential explosions and radon exposure. (The clip, which was posted in February, has since gone viral online.)

Radon is an odorless, cancer-causing radioactive gas that "comes from the natural (radioactive) breakdown of uranium in soil, rock and water and gets into the air you breathe," the U.S. Environmental Protection Agency (EPA) notes. Because it takes some time to decay, some worry about the health effects posed by natural gas that gets delivered to small New York City apartments quicker and from a shorter distance by the new pipeline.

High-pressure pipelines are also liable to explode, as the video points out. In 2012 alone, there were 244 significant incidents on U.S. pipelines that caused a total of 10 deaths and more than $180 million of property damage, according to the U.S. Pipeline and Hazardous Materials Safety Administration (PHMSA.)

PHMSA, which is charged with protecting the nation from accidents caused by transporting hazardous materials, is chronically under-staffed, a Congressional report found, and only requires 7 percent of natural gas lines to be inspected regularly, according to ProPublica.

The video also points out that Spectra's safety record isn't exactly pristine. An explosion at a large underground Texas gas facility that was owned by Spectra's parent company, Duke Energy, caused a 1,000 foot-high fireball in 2004 that led to the evacuation of hundreds of residents within a three-mile radius of the storage facility, the Houston Chronicle reported at the time. (The explosion, caused by a faulty valve, was followed by a second explosion that prompted a second, wider, evacuation.)

"Once complete, our project will provide safe, reliable natural gas which will reduce our nation's dependence on foreign energy sources," Spectra said in a statement to local Fox affiliate WNYW in New York. "Spectra Energy has an outstanding safety record and our new pipeline will meet or exceed all Federal safety requirements and regulations."