With the upcoming release of his album Speculum Orum and the video for its title song, I wanted to talk to M. Lamar about what inspires his music, which is steeped in racial politics and meditations on the history of black bodies and souls in America.

Laverne Cox: "Speculum Orum." Can you tell me what inspired the song and its video?

M. Lamar: "Speculum Orum" refers to a device used on slave ships during the trans-Atlantic slave trade, to hold the mouths of captured Africans open, forcing them to eat when they had decided not to eat. We know that many captured Africans chose to starve themselves rather than endure the brutality of what was the slave ship. I wanted to reflect on what that means now. I've always said the slave ship is now, the plantation is now, that the same kinds of structures are in place in terms of how power works. To quote James Baldwin, "History is not something that we read about in books. History is not even the past. It's the present."

Cox: The video has a sort of S&M, ritualistic quality to it, largely because of the gear that is worn in the video.

Lamar: My co-star, Eriq Cephalopunx Tyler, was partially cast because we're friends. We're really good friends. He was also partially cast because of his aesthetic. I was very interested in where both of us exist in subculture. Eriq is crust-punk-identified. He is also a feminist. He was a women's studies major at the College of William and Mary. I'm very connected to feminist theory as well as post-colonial, racialized theory. So, the kind of relationship we have politically I wanted to have sort of laid bare in the video. A lot of it is about black people and white people coming together and trying to have a moment with this history, together, so for me it's about this sort of interracial relationship and trying to grapple with or deal with starting with this fetishized relationship, but hopefully moving beyond that. Maybe we start with these sort of historical dynamics, and hopefully there is something beyond that. I'm not sure if the video, in fact, talks about the beyond that. 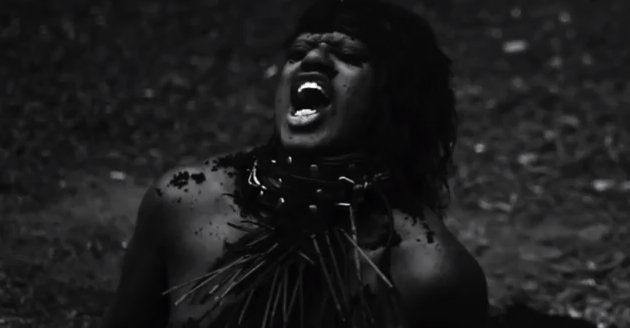 Cox: What are you personally working through in the video? It seems to be a lot about power and control.

Lamar: Personally I am fascinated with... I'm obsessed with the history of how we got here as black people in this subjugated position. I'm obsessed with that. I'm obsessed with how certain black people are willing to play certain games within the system and to game the system and are able to get ahead. Like on the slave ship and the plantation, for instance, we know that there were certain people, black people, who were able to advance on the slave ship, on the plantation, if they were willing to sell out other people, other slaves or the insurrections that were happening. But I think the way that I sing and the musical tradition from which I come are about a certain kind of transcendence; the kind of singing I do has a religious aspect of it. "Speculum Orum" as a piece started as the title track for a longer requiem. It started out as a sacred text, as this sacred music first performed at Cathdral of Saint John the Divine.

Cox: Whom do you see as the target audience for your work? For me there's something so spiritually transcendent about this song and its subject matter, but the video locates you and the song in a very specific subcultural place that might alienate a lot of folks, a lot of black folks and other people who might connect to the sacredness of the music but not relate to the visual presentation.

Lamar: We know, first of all, that as a mass movement, black folks are not necessarily fighting against homophobia, against transphobia and gender fascism. So we understand that the mainstream of black culture, that the BET mentality is not representing people who are making other choices in terms of subculture, in terms of gender expression and sexuality. But another thing Cornel West says is, "I love black people unconditionally whether they love me or not." What I am doing with my work is honoring my grandmother, my grandfather, my mother, my own personal history. I'm going to honor my own personal connections that I feel deeply to the ancestors, and do that my way, with my voice adding to a long history of poets, musicians and artists in the tradition. Black people's general rejection of me I'm not going to entertain. I can't entertain that. I can only start in the place from which I come and a place of love. I found myself in hardcore punk and metal shows when I was a kid. I found myself in this kind of music. I want to honor that location at all times, that subcultural place from which I come and with which I strongly identify. And there were always black people at those shows, not predominantly, but they were there, whether they were goth shows or punk shows or hardcore shows. I believe that music, if it's powerful, has the ability to transcend all these boundaries and barriers. You start from the place from which you emerge, and hopefully, if you have a strong voice (and I believe I have a strong voice), you start there, make the work and hope for the best.

For more information on M. Lamar, go to www.mlamar.com.