These speakers should write the book on captivating an audience and speaking truth to power.

"Sure I've been in a few plays and musicals, but more importantly, I've been acting every single day of my life."

New Jersey high school senior Jacob Rudolph showed true bravery earlier this year, when he came out as an LGBT teen during a speech in front of his entire class. His decision to stand up for equality ended up resonating with online viewers so quickly that in less than two weeks after coming out to his friends and classmates, he was invited to multiple television appearances that included a visit to Anderson Cooper's show where actor and LGBT activist George Takei surprised Rudolph.

"Because I’m not a trained Arizona official, I somehow got that backwards. Actually, Ms. Gomez, of Texas, has helped Mr. Bieber, of Canada, learn all about his adopted country. Justin, when you perform in Phoenix, remember to bring your papers."

"Pick Out The Immigrant" was a game presented by Rep. Luis Gutierrez (D-Ill.) to the House of Representatives last year, after the Supreme Court's decision was released on Arizona's now infamous "Show Me Your Papers" law. Combined with Gutierrez's charismatic delivery, the game -- which asked if listeners could figure out who was the immigrant, Justin Bieber or Selena Gomez -- became a brilliant and hilarious takedown of profiling. It remains relevant a year later as we deal with New York City's "Stop and Frisk" policy.

"The winners of a rigged game should not get to write the rules."

Dylan Garity is a College National Poetry Slam champion. For the 2013 National Poetry Slam, Garity performed "Rigged Game," an emotional poem about his sister, an ESL teacher for an elementary school in Boston. Her students are native Spanish speakers, forced to learn entirely in English due to the 2001 "No Child Left Behind" Act. As Garity eloquently describes, the measure has been crippling to many young students' educations. You can check out more of his work on Garity's Tumblr.

"All I have done is simply take out the phrase 'racial integration' and substituted it with the phrase 'gay rights.'"

Phil Snider is a real Reverend from Springfield, Mo. In 2012, he showed up at a community meeting widely attended by anti-gay rights supporters, where he gave unexpected testimony in favor of LGBT equality. Snider used direct quotes from white preachers in the 1950s and '60s who supported racial segregation, pointing out that anti-gay rights arguments of today used nearly identical arguments to the anti-civil rights arguments of previous generations. His biting conclusion is a definite masterpiece.

5. Growing Up Black With The Police

"[I] don't like the fact that he learned to hide from the cops before he knew how to read."

Javon Johnson performed this piece for the semifinals of the 2013 National Poetry Slam at Da Poetry Lounge. Chronicling a question-and-answer exchange he had with his 4 year old nephew, Johnson became increasingly emotional as he dove into why the little boy had been taught to fear the cops before even learning to read. Johnson has also written for Huffington Post's blog in the past.

"They thought that the bullet would silence us ... but they failed."

At 15, outspoken youth activist Malala Yousafzai was shot in the face and neck by the Taliban in Pakistan during a failed assassination attempt. After a months-long recovery period, Yousafzai celebrated her 16th birthday as she addressed the United Nations Youth Assembly to continue her push for peace, education and equality. Her powerful speech proved that the Taliban had completely failed in their effort to silence her with terrorism.

"And I feel like it took me a really long time to get to that point. In an instant it was brought down completely."

After discovering in high school that she had been voted the ugliest woman on the Internet, Lizzie Velásquez was understandably sent into an emotional spiral. Born with an extremely rare disease that is believed to be a non-fatal form of neonatal progeroid syndrome, Velásquez has never been able to weigh more than 64 pounds. But instead of letting the nasty comments get to her, she took the high road and became even stronger. Velásquez is now a perfect example of overcoming bullying and becoming a happy and proud human being. For more, you can also catch her appearance on the Today Show.

"We were told we were fighting terrorist...the real terrorist is me."

Michael Prysner is an Iraq War veteran who ranked as a Corporal and was responsible for ground surveillance, raids of homes and the interrogation of prisoners. Upon his return, he became an anti-war activist and has co-founded the organization "March Forward!", which encourages active-duty military personnel to resist deployment. The speech below was given at 2008 Winter Soldier, a meeting for Iraq Veterans Against the War held in Maryland.

"I really want to snort cocaine off of some drunk girl's equality."

Kait Rokowski is currently ranked third in the world for female slam poets. For "How To Cure A Feminist," Rokowski gives a satirical guide to getting in between an empowered girl's legs and then molding her mind to better suit the patriarchy.

"You grownups say you love us, but I challenge you, please, make your actions reflect your words."

In 1992, Severn Suzuki, then 12, raised the money to travel 5,000 miles from Canada to Rio de Janeiro to address the UN Earth Summit. When she was only 9, Suzuki founded the Environmental Children's Organization, which was committed to teaching other children about environmental issues. Since giving this tour de force performance, Suzuki has remained an environmental activist. She went on to graduate from Yale, write a book, host a television show for children on Discovery Kids, and basically be an all around awesome person.

11. Living In America As A Muslim

"Listen, there is terrorism. And there are terrorists living. But the last time I checked, terrorism and terrorist are not a religion."

Hersi is a Somali Muslim, slam poet and former United States Marine who served in Iraq. His full name is Shirwa Hersi, but people refused to learn the correct pronunciation and eventually started calling him just "Hersi." This seems to be a launching point for the poem, "Terrorism is not a Religion," which chronicles having to deal with prejudice as a young school boy and the 9/11 apologies Muslim Americans are still forced to make. It's not a public speech like many of the others, but it really resonates. 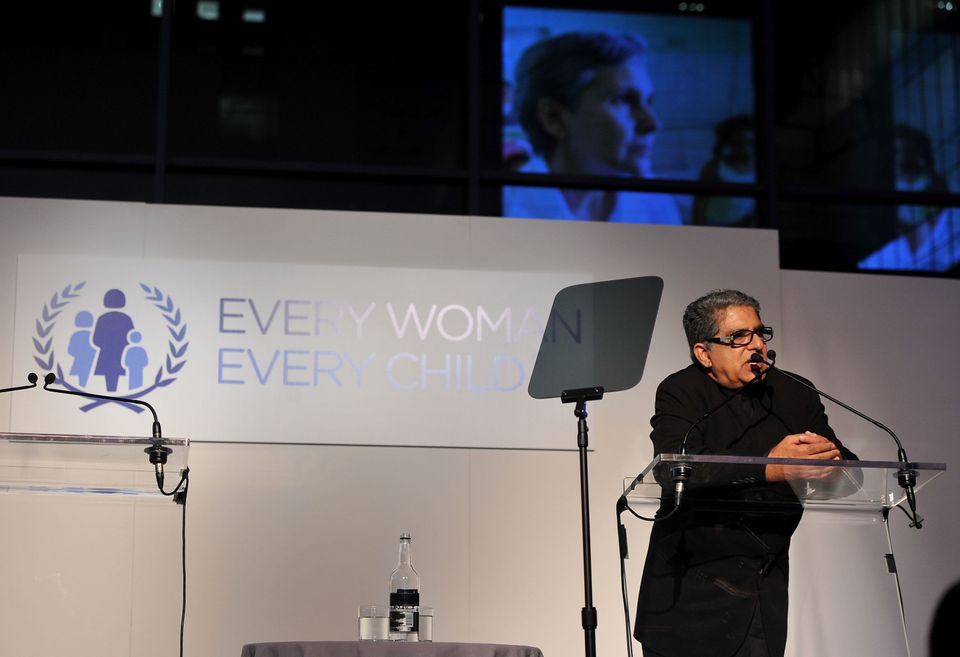 1 / 24
Deepak Chopra, Author, Physician
At <a href="http://www.hartwick.edu/current-students/commencement-2013/commencement-speaker/chopra-address" target="_blank">Hartwick College</a> in New York: "Know your true self. Your true self is not your self-image that is dependent on the labels you and others have given yourself. Your true self is the innermost core of your being that is beyond all labels, definitions and limitations. All the wisdom traditions tell us that the human spirit is a field of infinite possibilities, a field of infinite creativity, love, compassion, joy and profound equanimity. Know you can only give to the world that which you possess in that innermost core of your being. Remember that you will create peace only when you are peaceful and create a loving world only when you have learned to love."
Getty Images