Scientists have come up with device for silencing speech, but the hand-held "Speechjammer" has people talking up a storm. The scientists--from Japan's National Institute of Advanced Industrial Science and Technology--said in a new paper that the experimental device is designed to help curb "inappropriate speech in public places." But one can easily imagine how the gun-like gizmo might be used as a "weapon" against loud-mouthed protestors and others who voice unpopular opinions.

Gizmodo noted that the device's "rally-quelling application [calls] to mind the Arab Spring and the Occupy movement."

Other reports have been more sympathetic—the original MIT Technology Review report stated, "Clearly, speech jamming has a significant future role in contributing to world peace and should obviously be installed at the United Nations with immediate effect."

The computer-controlled device features a microphone and a loudspeaker that plays back a speaker's voice 0.2 second later. The fraction-of-a-second delay in playback--a phenomenon scientists call delayed auditory feedback--confuses the speaker and makes it hard to continue speaking.

Speechjammer isn't the first sound-based crowd-control technology. But unlike the Long Range Acoustic Device (LRAD) which produces painful tones over long distances, or The Mosquito, which uses high frequencies to deter teenage loitering, the new device is able to "disturb people without any physical discomfort," the scientists said in the paper. 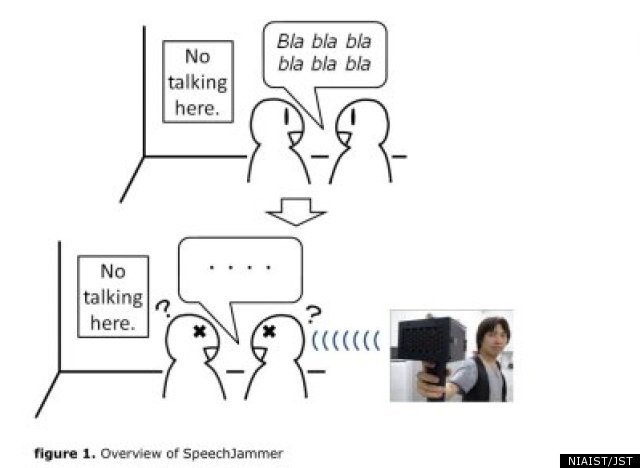 In case you'd like to try the DAF effect on yourself, Redditor couldthisbeart suggested this software, which was designed to treat stuttering—at longer delays, the disorientation becomes noticeable. For spanish speakers, there is also a series of videos featuring the "idiotizador," a personal version of a DAF device.

The paper was published March 1 in arXiv.org, an online scientific paper repository maintained by Cornell University.